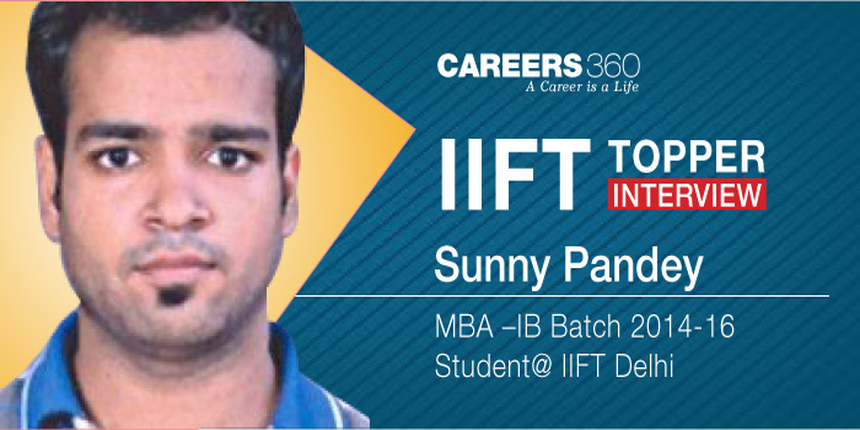 Sunny Pandey
achieved a score of 67.58 in IIFT 2013 and secured admission in the top B-School, Indian Institute of Foreign Trade (IIFT), Delhi. A Chemical Engineer by education, Sunny aspired to add a managerial edge to his skills which made him pursue a degree in foreign trade.

In this interview with Careers360, the IIFT topper Sunny who tackled his weakness in Quants by practice, shares the importance of strategically planning the IIFT exam time. He also shares how he worked on basic quantitative concepts and self preparation to excel in the IIFT and other management entrance exam.

Read more for his insights on successfully cracking IIFT.

Careers360: What made you to pursue a management programme?

Sunny Pandey After working for around 20 months, I realized that I wanted to pursue a career in management for better growth opportunities. Also, the room for newer experiences and learning has always been an inspiration, so I decided that it’s right to go for management education and add new set of skills to my repertoire. I aspire to grow in General Management sector as it will allow me to work in cross-functional roles.

Careers360: Apart from IIFT 2013, which other MBA entrance exams you appeared in?

Careers360: Why did you choose to join this IIFT? Please also name other B-schools which made final admission offers to you.

Sunny Pandey It was an easy decision for me as my aspirations were more aligned with the program offered at IIFT.  The legacy and wide network of its alumni also convinced me to join IIFT. Though I appeared for interview at XLRI (BM & HR), but selected IIFT to pursue my dreams.

Careers360: What was your preparation strategy for IIFT 2013?

Sunny Pandey Since I was preparing for other management exams, most of the syllabus was covered. I had to brush up on Current Affairs and Static GK before the exam as it’s important to b strong in the GK section if you want to crack IIFT. IIFT’s entrance is predominantly a speed test. In the week leading to exam, I took 4 mock tests to judge the amount of time I was taking to complete the paper.

Careers360: How important is Coaching or Mentoring to crack IIFT or other Management entrance tests?

Sunny Pandey I don’t think that it is very difficult to crack any exam without coaching. Though coaching, at times, help in infusing regularity with the studies. Otherwise I do not think that they teach anything special. I never joined any coaching institute for preparation but I did take mocks very seriously.

Careers360: How did you manage your IIFT preparations along with your working hours?

Sunny Pandey On weekdays I used to study for 1.5-2 hrs. While on a weekend I used to slog for 6-7 hrs, and made sure that at least 1 mock paper is solved. I had a planned approach towards studying. Since I was good with verbal and logical reasoning, I used to devote less amount of time on that. I used to do quants and DI almost every day.

Sunny Pandey English Comprehensive: I used to read articles on internet and write a concise summary. This helped me in identifying the main idea and structure of the article. I got it checked with fellow aspirants. It also allowed me to learn to discard any other information which was not necessary.

General Knowledge & Awareness: I picked up Manorama’s Yearbook and read it for around 15 days. For current affairs I relied on newspapers.

Logical Reasoning & Quantitative Analysis: For logical reasoning I referred to Arun Sharma’s book on the subject. For quants I solved Arihant’s Quantum Cat.

Careers360: What was your Time Management formula while taking the actual IIFT paper?

Sunny Pandey I started with verbal section first and completed it in 5 minutes, after that I went to GA and LR and by 25 minutes I was done with them. So I had 1.5 hrs left and 3 sections to finish. I first started quants and solved 18 question straight, it took me around 25 minutes. Then I went on to RCs and completed this section in 25 minutes. In 5 minutes, I revised the paper and looked if I had missed any question. In the last 30 minutes, I tackled my nemesis, DI. It was calculation intensive and by the time you are in final phase, mental fatigue starts to set in. I could only attempt 10-12 questions in DI. In the final 10 minutes I carefully verified my OMR.

Careers360: What were your strong and weak areas? How did you prepare and what special efforts did you put for improving your weak areas?

Sunny Pandey: My strengths were Verbal Ability, Reading Comprehensions, and Logical Reasoning. My weakness was DI, so to counter it I solved 3-4 different types of questions every day. I used to do lengthy and tedious calculations in my free time to sharpen my skills.

Careers360: What is your advice for the Management aspirants who will take IIFT 2014?

Why mock tests are important to crack CAT

Stay tuned on www.bschool.careers360.com  for more news and updates