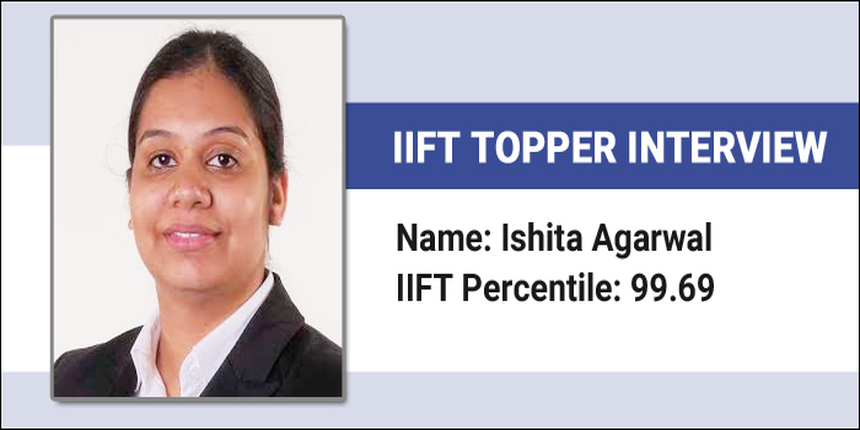 With an intent of succeeding, Ishita Agarwal planned her IIFT preparation in a way that she was able to cover the entire syllabus weeks before the test day; saving time for revision. She used basic tricks to strengthen her weak areas, which ultimately led her to become an IIFT Topper with 99.69 percentile.  In this interview with Careers360, Ishita shares her strategy and basic methods that made her accomplish her goal.

Ishita followed a strict weekly plan for her preparation. She focused on completing her weekly goals, thus finishing her entire syllabus before schedule. Since her weakness lied in the Vocabulary area, she followed a simple ‘10 word a day’ trick to learn most of the words. Further, Ishita shares, how she cleared her concepts while taking mock tests for Quant and DI sections.

Read excerpts from Ishita’s interview to know how simple tricks can give you big success.

Careers360: Since when did you start preparing for IIFT, and what was your preparation strategy?

Ishita: I started preparing for IIFT in July which coincided with the placement time. So my agenda was to prepare for both. The preparation strategy was to simultaneously prepare for Quant, Data

Interpretation, Logical Reasoning and Verbal Ability with required proportion of time. For July, I only focussed on practicing chapters in Quant, developed a habit of reading newspapers etc. From August, I also started taking mock tests to check my progress. I solved a variety of questions for every section and worked on my weak areas.

Careers360: Do you think IIFT should also bring some changes in its pattern in terms of sections, mode of conduct, use of calculator, along with defining definitive set of questions and marks?

Ishita: Some changes can be brought about like the mode of conduct can be changed to online. But I don’t see any issues with offline conduct as it is a demarcation. Also, calculators must not be allowed as Data Interpretation thrives on the understanding of numbers by candidates. Solving calculations within a short span of time is a great challenge which separates the toppers from others.

Ishita: For Verbal Ability, I read newspapers, articles and hence developed vocabulary. I picked 10 words a day from the newspapers which I didn’t understand and wrote the words, their synonyms to develop a word network. I also practiced reading comprehensions, parajumbles, grammar etc. For DI and LR, it all depends on how many questions and the varieties you practice so that you develop a logical strategy. Also, there is a need to be comfortable with long calculations and rounding off strategy. For Quant, I focussed on all levels of questions and developed speed. It is of utmost importance.

Careers360: What was your time management plan for IIFT; both during preparation and during the test?

Ishita:: During preparation, it is very important to give time to practice every section, so that your scores are not disproportionate. The time is also to be taken care of. I worked on weekly goals for the topics from every section that I must complete. Also, I dedicated at least one hour for reading, be it articles or books and kept abreast with the latest  happening. During the examination, as it is a written paper, time is used for marking answers too. I never left the questions to be answered at the end. The paper has four sections: Verbal Ability and Logical Reasoning, Data Interpretation, Quantitative Ability and General Knowledge. I divided equal time for each section and didn’t dwell too much on a question consuming more time.

Careers360: What were your strong and weak areas? How did you tackle your weak areas in the test?

Ishita: My strong areas were Verbal Ability and Logical Reasoning. Also, topics like percentage, ratio and proportion, time and work were some at which I was good at. My weak areas were Probability and Functions. So, from the very start, I focussed on them and extensively practiced  these. I learnt the concepts with the help of mock tests. In exam, I avoided the questions which I was not sure of or which consumed more of time. I optimised my performance through maximum accuracy for attempted questions.

Careers360: Your message/tip for this year’s IIFT aspirants?

Ishita: The greatest tip is to have a clear purpose of why you want to come to IIFT. It will make the rest of the journey very easy. Also, figure out the agenda as to how you will go about preparing for it. It varies from person to person. For me, weekly goals worked. So, prepare for IIFT holistically, building every aspect, not leaving any weak blind spots.