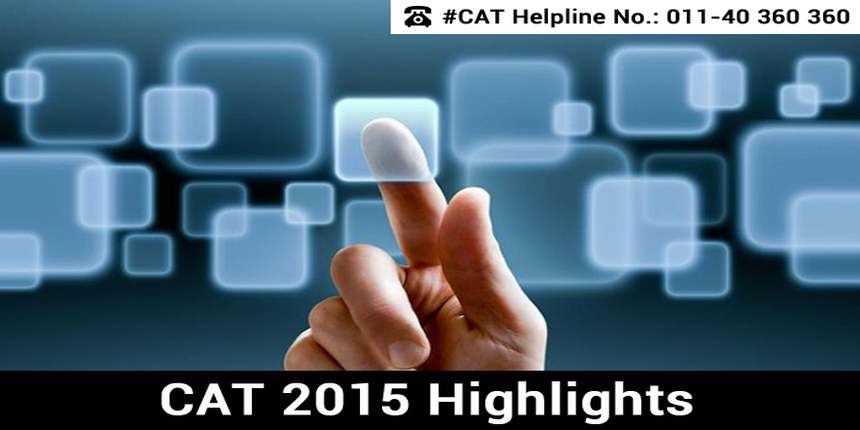 Single Day Window – This is the first time since 2009 that the computer based CAT has been conducted in a single day window. From 2009 to 2013, the exam was held in a 20 day window in 2 slots each. The multiple-day window often led to controversies on equating and normalization process. CAT 2014 saw a shorter window of 2 days and 4 slots but this year the exam was concluded in a single day window in forenoon and afternoon slots.

No technical glitches – There has been no report of technical glitches this year bringing much relief to the test takers as well as the conducting body, IIM Ahmedabad. Tata Consultancy Services (TCS) has been conducting CAT since 2014 and in both the years, the test has been conducted in a glitch free manner.  CAT has a rampant history of facing technical snags since the test’s mode was changed to computer based since 2009. Prometric was the online testing partner for IIMs till 2013 and in there was hardly any glitch free delivery in the 5 year term.

Non-MCQs came as new puzzle – There were a total of 33 non-MCQ questions in the exam from each of the sections. The highest number of non-MCQs was in the Quantitative Ability section, which was 15, followed by the Verbal Ability & Reading Comprehension section (10). The Data Interpretation & Logical Reasoning section had the lowest number of non-MCQs, 8. Although this type of questions confused the students as they could not apply the elimination method. But the positive fact is that there was no negative marking scheme involved with these questions. According to the CAT 2015 Convenor Prof. Tathagata Bandyopadhyay, the non-MCQs would help eliminate the trend of random guessing resulting into candidates losing marks.

Surprise in VARC section – This was the first section to appear on screen with 34 questions. The section was divided into 2 areas, Reading Comprehension and Verbal Ability. There were 5 RC passages with 2 passages with 3 questions and other 3 passages with 6 questions respectively. Till last year, there used to be 4 questions with an RC passage, which was different this year. The VA area had 10 questions, all were non-MCQs. Surprisingly there were no questions on Grammar, Vocabulary or FIJ. Only 3 topics were covered, Para Jumble, Summary and Odd Sentence Out. However, the exact same pattern was followed in the official CAT 2015 Mock Test. Candidates who had gone through the mock test carefully would not have found the question types to be surprising.

Sectional time limit may lower cutoff – According to the experts, the overall difficulty level was higher this year compared to last year. Moreover, this year the sections were time bound for 60 minutes. As Arks Srinivas, CEO, VistaMind Education explains, “By giving 60 minutes to each of the sub areas of the CAT papers viz., Verbal & RC, DI & LR and QA, the IIMs have ensured that the student spends this time only that area. This also means that the cutoffs in each of the sections may be lower than in an exam where there is no time limit given for each section.”

CAT becomes more accommodative towards female candidates– While applying for CAT 2015, applicants had to provide the preference of 4 cities in descending order. The authorities, however, ensured that the female and Differently Abled candidates were allotted center in the most preferred city. It was also observed that the number of female candidates was more in the urban locations. Careers360 reported at 3 test centers located in Sarita Vihar, New Delhi and Greater Noida where the candidates were visibly dominated by female test takers (about more than 90%).

How CAT 2015 Pattern change and difficulty level will reflect in your results?

Stay tuned to bschools.careers.com for more news and updates on CAT 2015.

CAT 2020 Application Form Correction - With the help of the CA...

CAT Login 2020 - Know all the details about CAT candidate logi...

CAT 2020 registration form is available in online mode from Au...

21 hours ago
Read More
View All News and Articles

To download the NIFT previous year question papers refer to the link mentioned below:-