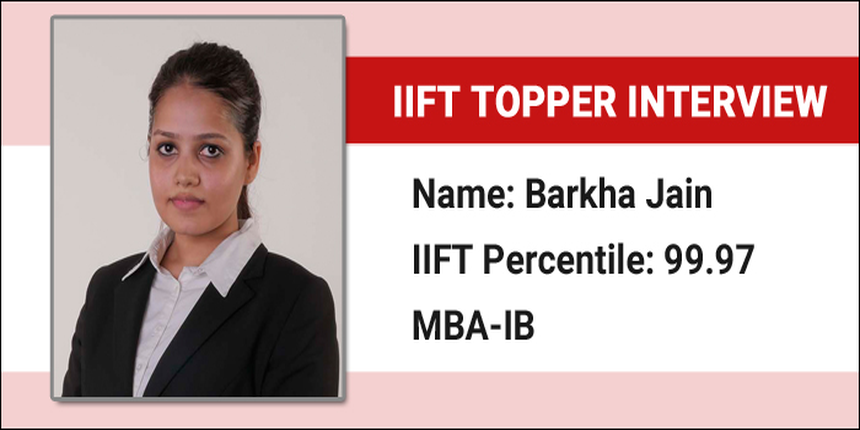 Despite being a conventional paper pencil based exam, IIFT can be quite a challenge to crack owing to the lack of prior knowledge on a number of questions and marking scheme. But for Barkha Jain, who secured a percentile of 99.97 in IIFT 2015, these factors won’t be a hurdle to crack the test if you have done a systematic preparation for the test. Barkha suggests IIFT 2016 aspirants to focus on GK section, which distinguishes IIFT with CAT and be confident while attempting the test.

Barkha also shares how she tackled her weak areas, DI and GK by practicing Vedic Mathematics and reading newspapers and maintaining records on various topics. She has also shared the time management strategy for preparation and exam day. For her, managing time efficiently between all the sections is equally important along with maintaining accuracy since IIFT is generally a lengthy paper and carries sectional cutoff.

Careers360: What made you pursue MBA in International Business from IIFT?

Barkha Jain: I chose IIFT specifically because it is a 53-year-old institute established by the Government of India with a WTO Centre on campus, among other factors. IIFT’s legacy is great and it is different from other B-schools in many ways. The MBA (IB) course at IIFT covers subjects of domestic businesses as well as international. The batch size is small which, in my opinion, provides for more concentrated attention and a higher number of opportunities, and also for a more integrated campus life.

Careers360: Since when did you start preparing for IIFT, and what was your preparation strategy?

Barkha Jain: I started preparing from June. I felt that six months was enough to cover the syllabus. Initially, I just studied the concepts and practiced basic questions and my pace was casual, 1-2 hours a day. In the last month, I practiced lots of questions and took 2-3 mock tests. During this time, I studied for 6-8 hours a day. In the last two-three days before the exam, I didn’t study anything. This freshened up my mind for the exam.

Careers360: Do you think IIFT should bring some changes in its pattern in terms of sections, mode of conduct, use of calculator, along with defining a definitive set of questions and marks?

Barkha Jain: No, I don’t think IIFT should follow along the lines of CAT or any other management entrance test. IIFT has a GK section, which is very important for upcoming managers. Calculators should not be allowed in the exam. The questions and marks, too, should not be defined. Future managers should be able to handle some uncertainty.

However, going digital is one count where IIFT should also follow.

Barkha Jain: Maths and LRDI: I just studied the concepts and then practiced 1-2 questions of each topic.

Verbal: I used to read one book a week. The books I chose were classic literature, which has a better language than the modern novels. I made flash cards to learn difficult words. I practiced a few exercises in the last month.

GK: This is one area where I lacked preparation. It is an absolute must to read the newspaper every day, something which I wasn’t very diligent about. So, I feel that my GK wasn’t as strong as it could have been.

Careers360: What was your Time Management for IIFT; both during preparations and during the test?

Barkha Jain: I used to attend college while I was preparing for the exam. Initially, it wasn’t tough to manage as I gave only 1-2 hours in a day. However, near the exam, when I had to take out 6-8 hours, it was tough, especially because my college exams were overlapping as well. To manage both, I just had to study for even more hours. After studying for IIFT and other exams, I used to study for college as well. Also, it helps to save time when you can. Whenever I was travelling, I used to revise my flash cards, or revise my notes.

As soon as the test started, I hurried because I knew that time might be a constraint. I divided the time between the sections. First of all, I did the sections that I know I am fast at. I finished Verbal, GK and LR pretty fast. Then, I did the Maths and DI sections. I switched from one to the other after a while because I was afraid time would be less and there is a sectional cut off. But I was able to finish the other section and then come back and finish this one too. In the end, I had seven minutes left, during which I did the tough questions that I had skipped earlier.

Barkha Jain: My strong areas are Verbal, Math’s and LR. I might call DI a tad bit weaker than these. My GK was quite weak.

I practiced a lot of DI and learnt Vedic Math tricks to make myself faster. For GK, I just studied the recent news, countries and capitals, rivers, books, major politicians, etc. Anything I could find in the newspaper, e.g. a Chief Minister’s name, I used to make a category out of it and studied it, i.e. I would study the Chief Ministers of major states.

Careers360: Your message for this year’s IIFT aspirants?

Barkha Jain: Read a lot, be clear on your basic concepts, it really isn’t as tough as they say. Just have fun with your preparation and be confident in your interview. And don’t forget to read the newspaper every day. Best of luck!