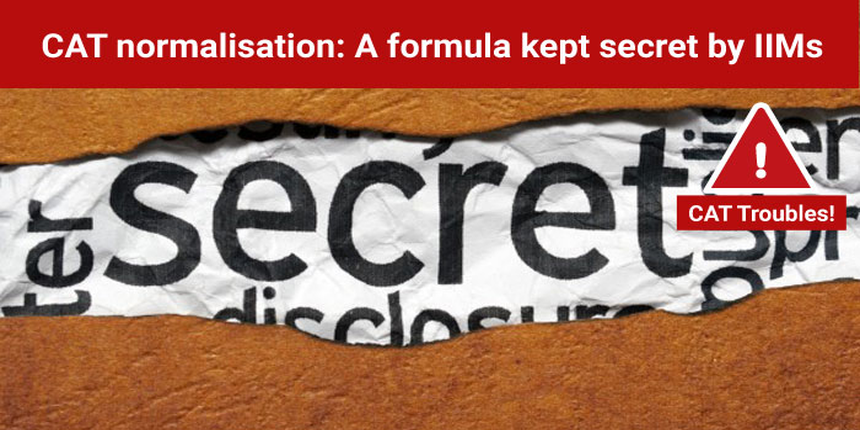 What is the CAT normalisation process? How are CAT takers from different testing slots evaluated? How is raw score of CAT changed into percentile?

Though Indian Institutes of Management (IIMs) broadly answer these questions, they keep specifics of the evaluation process confined to themselves only.  Ever since the CAT was introduced in computer based-mode in multi slots in 2009, the evaluation of CAT paper through normalisation has remained a secret with IIMs.

What do IIMs say on CAT evaluation process?

Further, scaled scores for each section - Verbal Ability and Reading Comprehension (VARC); Data Interpretation and Logical Reasoning (DILR); Quantitative Ability (QA) and Total along with the Percentiles are published.

How does CAT Normalisation work?

No authorised explanation of CAT normalisation is available till date.

The CAT normalisation, according to IIMs, is an established practice for comparing candidate scores across multiple Forms and is similar to those being adopted in other large educational selection tests conducted in India, such as Graduate Aptitude Test in Engineering (GATE).

Yet, none of the experts have been able to decode the secret normalisation formula applied by IIMs for CAT evaluation process. A few domain experts, though, interpret the process; they first put a disclaimer that their logic might not be correct.  Experts suggest that very little information published in this regard by IIMs makes it a mysterious element of CAT as CAT coaching institute T.I.M.E. terms it a “conceptually cryptic statement”.

IIM Ahmedabad alumnus Deepak Mehta who secured 100 Percentile in CAT 2010, before explaining the process on Quora, begins with a disclaimer: “Anything I say would just be an educated guess at best.”

He, however, adds that there is no validation to any explanation, like his own, unless they (IIMs) voluntarily disclose the methodology.

GATE normalisation details are put on official website. Why don’t IIMs do this?