How to prepare for General Awareness section in MBA Exams 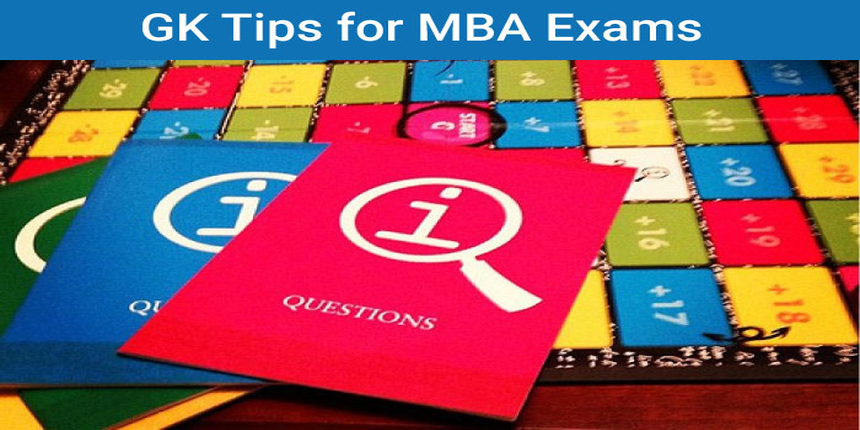 General Awareness or General Knowledge is such dynamic area, in which you cannot limit your preparation even after the end of an exam. It is that subject, whose preparation is continuous and unending. No matter how much you prepare, it seems there is still a lot to be prepared. If you are an MBA aspirant, and soon appearing in some of the top management entrance tests like- CAT, XAT, IIFT, and SNAP, preparing for GK section is a must to score high. This article of Careers360 will give you an in-depth exam wise analysis and weight-age of the General Awareness section and tips for preparation.

Apart from CAT, the other national MBA entrance exams which have a section on GK. The exams and the name of the section and number of questions are given in the table below.

The General Awareness section questions are more or less similar in all the MBA entrance exams. The questions are mainly a mix of current affairs and static GK. However, the question types vary according to the conducting institute as well. For e.g. IRMA or the Institute of Rural Management Anand, which offers a niche programme in Rural Management, asks questions specific to that area. Similar is the case with TISSNET, which is conducted by Tata Institute of Social Sciences and MICAT, conducted by MICA, Ahmedabad.

Now we will have a look at the analysis of the General Awareness section specific to the exams.

The General Awareness section was reintroduced in XAT from 2013 onwards. Though the section existed way back in 2004, which was the last year to feature the section after which it was scrapped since XAT 2005 only to make a comeback in 2013. In 2016, some major changes were introduced in XAT. The Paper 1 of XAT has 78 questions to be attempted in 170 minutes. This paper has 3 sections - Quantitative Ability & Data Interpretation, Verbal Ability and Decision Making & Analytical Reasoning having 26, 23 and 29 questions respectively.

Paper 2 has general knowledge and essay writing questions. There will be 25 questions to be completed in 35 minutes. The topics on which the questions are asked include, but not limited to the following:

The IIFT entrance exam’s General Awareness section remains on the easier side. There will be arpund 25-28 questions in the GA section. Out of these questions, 9 will be on current affairs and the rest of the questions will be on static GK. The topics will be on the generic lines of politics and business.

The above-mentioned topics appeared for the current affairs part. The static GK questions were from the following areas:

The overall difficulty level of the CMAT exam is easy to moderate. Among all the sections, the General Awareness section of CMAT can be easily cracked by the candidates who are regularly update themselves with current affairs. The topics of the questions generally range on the following areas:

The questions are asked from the topics of national and social interest compared to politics, business, sports, arts & culture etc. The common topics from which the questions can be expected include:

The sample questions which are been shared by IRMA are as follows:

Q: Which of the following statement(s) best describes what ‘poverty’ is?

(B) It is a condition in which a person / family does not have full-time employment.

(C) It is a condition in which the income of the family falls below the average income of a family in the country.

Q: Which of the following schemes of the Govt. of India is / are designed specially to help farmers in India?

Q: Farmers in India certainly get a subsidy on which of the following commodities of Agricultural use?

According to Vinayak Kudva, Head- PG India & Mumbai Region, IMS Learning, preparation for General Awareness is not a matter of 1 or 2 months but a continuous process.  The most tried and tested method to prepare for GK is to read the newspapers, watch at least 1 standard TV news bulletin.

Kudva says, “As General Awareness is a very vast area, it makes sense to follow the top stories as and when they happen. Candidates should start enhancing their general awareness full-time by reading newspapers and magazines such as Outlook and Outlook Business. While reading up on news making events, candidates should consider various aspects and arguments and use their own judgement to decide what their stand should be.”

Keep a close watch on the major political and economic developments which should also include sports, art, culture, literature, social issues and media. Though you will definitely expect area specific and niche questions in case you are taking the entrance exams for IRMA or TISS or MICA, but you should not rule out the chance to come across such a question in the other exams like XAT, SNAP etc. too.

Subscribing to one general newspaper and a pink paper would suffice your needs. For in-depth subjective analysis, read magazines like Frontline, Outlook, The Week, The Economist to name a few. For static GK, referring to the yearbook or GK encyclopedia of a reputed publication would be enough.

Remember, there is no end to the preparation for GK. You are bound to not know certain aspects, be it static GK or current affairs. Give your best shot but don’t cram up your memory with excess knowledge which you may not bear.

Since a majority of the exams follow the negative marking policy, it is best not to answer questions which you are not sure of. However, make sure you attempt enough questions to not only clear the cutoff but to score maximum marks possible as well.

Top MBA Exams you must take