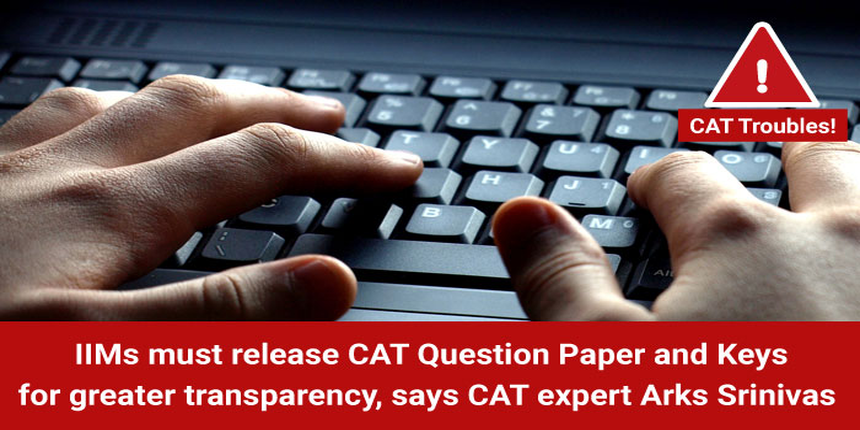 Ever since the mode of CAT or Common Admission Test changed to computer based, CAT takers have been raising questions on the credibility of the evaluation process and other testing areas. Careers360 has already reported on the array of problems faced by CAT takers every year and the probable solutions IIMs could offer. We approached CAT experts to know their take on the seriousness of trouble areas in CAT 2016 and the ways it can be improved.

In this special interview on the CAT trouble areas, CAT expert Arks Srinivas who is the CEO of VistaMind Education and Director of Vanguard Business School, Bangalore advocates for the release of question paper and answer key, and also speaks on changes that IIMs need to bring in CAT for making it more transparent. He believes that conducting the test in a single slot and releasing question paper and answer keys are some of the steps if taken by IIMs, can address major concerns.

Careers360: In recent years, there have been multiple concerns on different areas of CAT including its evaluation and credibility of the testing process. How can CAT be better from students’ perspective?

Arks Srinivas: In my view, the following steps can be taken by IIMs to make the test better from the test takers’ point of view.

Careers360: IIMs claim to have modified question pattern and question type for bringing greater academic diversity on campus. How do you see this change?

Arks Srinivas: There is hardly any change that the IIMs have done in the CAT pattern. If one looks at the CAT patterns from 1999 to 2008, the overall pattern has been almost the same. Only when Prometric took over as the conducting body of CAT exam, did the pattern change.

The IIMs are anyway giving more weight-age to gender (read women) and non-engineering students. Their cutoff should be announced early enough so that students know exactly what to expect.

Careers360: Do you think normalization process in CAT is fair?

Arks Srinivas: Normalization continues to be a contentious issue! With the exam being conducted in two slots, an element of luck is always associated as to which slot you get. For example, in the Slot 1 of CAT 2015, there was a question set on Cubes combined with Progressions. Students who were good in Cubes would have got full marks, while those not good in that area would have had to skip the set. In Slot 2, there was no question on Cubes set. So the entire batch of test takers, who wrote the test in the second slot was deprived of this set.

Now, the issue is that Logical Reasoning as an area is not an open and shut case kind of section. Different type of questions commands different levels of easiness or difficulty (for the entire student base). In this case, there is NO UNIFORMITY in the paper and hence one set of people lost out.

Careers360: What are the key areas that IIMs can work upon to bring more transparency in the CAT testing system?

Arks Srinivas: IIMs should release the question paper along with the key within a short period (post the CAT exam). They should also allow students to check their answers online.

Careers360: Given a chance to overhaul CAT, what are the fundamental changes you would suggest for the coveted MBA entrance exam?

Arks Srinivas: If given a chance, I would like to make the following amends in the test: