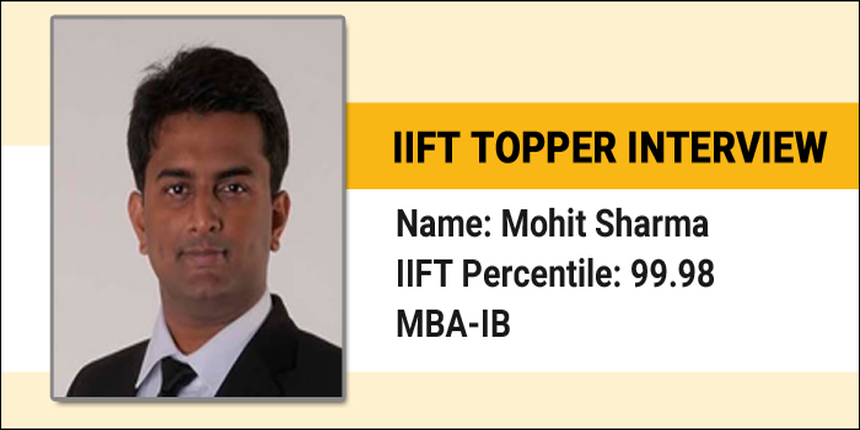 For Mohit Sharma, who cracked IIFT 2015 entrance exam with a high percentile of 99.98, the section of General Knowledge can help you get some extra marks if prepared properly. According to him, most of the candidates ignore the GK section but it can be critical in getting a good score in the IIFT Exam.

An Electronics and Communication engineer, Mohit’s strength lied in Verbal Ability and he started the exam with this section. Since IIFT gives you the advantage to attempt the paper according to your convenience, he suggests you to start with your strong areas and gradually move towards the weaker sections. He also stresses on attempting the paper in a balanced way to clear sectional cutoffs of IIFT with maximum questions in the strength area.

Careers360: Since when did you start preparing for IIFT? What was the strategy you followed?

Mohit: The IIFT exam was held on 22nd November, 2015. I started my preparation in earnest from July 2015. I first analysed the exam notification and started working on my strategies. I found out my weak and strong sections and focused first on the weaker parts. I also made time table for when to start giving the mocks.

Careers360: From last two years, CAT has been in news for its changes in the test pattern, whereas IIFT pattern has remained on the similar lines. Do you think IIFT should also bring some changes in its pattern in terms of sections, mode of conduct, use of calculator, along with
defining definitive set of questions and marks?

Mohit: I believe IIFT is one of the best conducted competitive examinations in India. According to me, aptitude tests are best conducted in paper-pen format. Most of the questions which appear in IIFT test are conceptual in nature and not very calculation intensive. IIFT exam also gives the aspirant the freedom to choose the section of test which he wants to solve first and in the process, make and implement their strategies.

Careers360: What was your time management strategy for IIFT; both during preparations and during the test?

Mohit: Since, I was weak in Quants, I dedicated most of my time to brush up the basics of quants and also solve multitude of problems. I chose the topics cautiously and solved every related
problem so that I was sure that I will be able to solve most of the questions pertaining to that topic.

As far as LR & DI goes, practice is the key. I made it a habit to solve at least five caselets every day of different type so that I felt comfortable with the topic. The key here is to solve problems
of almost every kind imaginable so that you don’t have to waste much time during exam to analyse the data.

I was pretty confident of my verbal skills, hence I just revised the Barron’s word list and made it a habit to solve multiple reading comprehensions and also brushed up basics of Grammar.

For General Knowledge, I struck to reading newspapers like Hindu and Mint and they didn’t disappoint me in the exam.

In exam, I first pounced on the Verbal section, followed by General Knowledge, LR & DI and lastly Quants.

Mohit: I was strong in Verbal and General Knowledge section but lagged behind in Quants. To remedy the situation, I devoted majority of time during the early phases of my preparation to brushing up my Quants basics and deciding on which topic to focus and which topics to leave altogether. I picked up high scoring and formulae based topics like Geometry,  Probability, etc.

Careers360: After the exam, how did you prepare for the selection rounds?

Mohit: After the examination, I was very confident of my chances of getting through. So, I almost immediately started preparing for the next selection rounds. I read newspapers like Hindu and Mint religiously because having good grasp of current affairs will give you an upper hand over other aspirants. I also read a few good books to provide a solid base for my mentioned hobby, which is reading.

Careers360: What are the key factors, you think, that influenced your selection at the GD-PI stage?

Mohit: According to me, you should have confidence on your ability to shine at critical moments. In the essay round, I refrained from using flowery language and stayed on the point. Group Discussions in IIFT are one of the longest you will ever face. Everybody gets enough time to elucidate his or her point. Knowing the subject matter is most important in such cases.

My interview was mostly cantered on my hobby which is reading and I was able to comfortably answer most of the questions they asked.

Careers360: What was your essay topic and how did you structure your write up?

Mohit: My essay topic was ‘Public-Private partnerships: a boon or bane’. I first introduced the subject and mentioned some of the latest happenings in the field that might have triggered
this topic. I then went on to enunciate the benefits of PPP by giving examples. I also mentioned some of the projects that were not able to achieve the desired results and concluded by mentioning how PPP were the way to go and though there are still some creases, it will not be beneficial to term PPP as a bane.

The important thing will writing the essay is to make sure that your sentences are coherent and your change of paragraphs are smooth and flawless.

Careers360: What made you pursue MBA in International Business from IIFT?

Mohit: As it is widely said, "No business is domestic; all businesses are international." No business in today's world is a domestic business. Every business has global ambitions and even the businesses not going global face competition from multinational companies.

The curriculum for International Business is very closely linked to the industry expectations and thus holds you in good stride for future.

Careers360: What is your message for this year’s IIFT aspirants?

Mohit: I would suggest the aspirants to focus on their strengths and try to maximize their marks in these areas. But, this should not mean that they ignore any section altogether for the fear of
losing out on sectional cutoffs. It is also mostly noticed that aspirants totally ignore the general knowledge part. The general knowledge section can be critical for getting you some extra marks and that too without taking much time.