Open Letter: IIMs! Will you bring transparency in CAT? 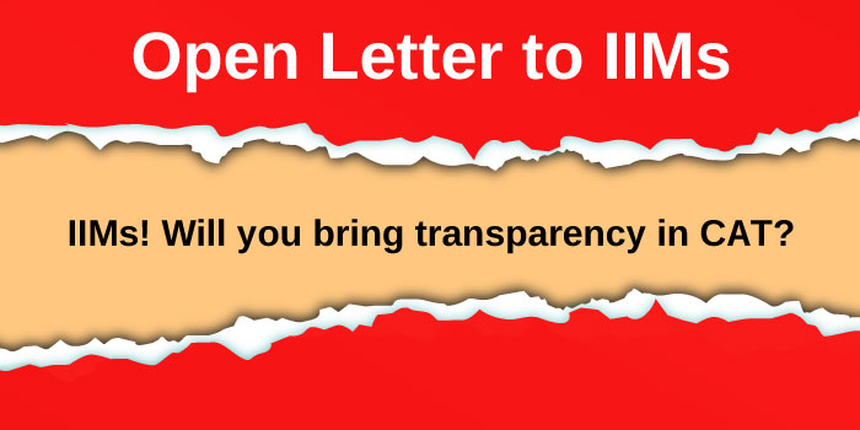 Careers360 has earlier reported on different issues related to transparency in CAT. We have now written an open letter to CAT 2016 Convenor seeking his response on the concerns raised by CAT takers.

It has been seven years since the Common Admission Test (CAT) was turned into a computer-based test with multiple testing slots. During this period, the scope of this national-level MBA entrance exam has only widened with increased capacity of existing IIMs and addition of 12 new IIMs. The efforts that IIMs have put towards making CAT scores acceptable for MBA admissions to more than 100 top B-schools in India is also laudable.

Unfortunately, along this journey, the IIMs have been increasingly inviting controversies for the way it conducts CAT. Doubts related to transparency of the testing system have mounted in the last seven years. This might also be one of the reasons behind stagnancy in the number of CAT registrations over the past seven years.

Sir, you would accept that there have been instances of technical glitches and wrong questions being asked in CAT in the past. There are also instances where IIMs have faced RTI (Right to Information) requests regarding issues related to transparency in CAT. With IIMs turning down requests for access to CAT raw scores and evaluation methodology, such issues have been reaching different High Courts also, leading to mistrust between IIMs and CAT takers.

We at Careers360 believe that aspirants have valid concerns. Transparency is missing from the CAT testing system at multiple fronts. As a public management institution and a torch bearer of best management practices, you also have an obligation to set high standards of transparency.

Through this ‘Open Letter’, we would like to know if the concerns of the aspirants, with regard to transparency in the CAT examination and result process would be addressed. We are listing out the concerns and hope that you would respond to them.

Why IIMs do not release Answer Key/Question Paper?

Ever since CAT turned into a computer-based examination, the question papers have not been made accessible to candidates. This puts a question mark on the credibility of CAT evaluation and scoring process as the test takers do not get any chance to revisit test questions and predict their scores. Candidates get the final scores which they are asked not to doubt.

Also, we know that it is a standard practice with many top exams in India to release answer keys. It is done for exams like UPSC Civil Services, JEE Main and NEET where the numbers are much higher than CAT. For example, JEE Main is taken by more than 12 lakh candidates which is about six times the volume of CAT takers. So, what prevents you from releasing the CAT answer keys and question paper?

Why IIMs do not give access to CAT raw scores?

The IIMs have been denying CAT takers access to their own raw scores despite a Supreme Court (SC) order asking public examination authorities to release evaluated response sheets which carries raw scores.  IIMs have been evading CAT answer key requests and other RTI requests related to CAT evaluation process in the name of RTI exemption clauses.  However, this does not stand legal scrutiny as the SC order relating to answer key release, says that “no exemption under section 8 is available in respect of evaluated answer books” and hence “the examining bodies will have to permit inspection sought by the examinees.”

The position that IIMs have taken on holding back the answer keys and response sheet is in complete violation of the SC order of August 9, 2011, where the apex court says that the provisions of the RTI Act will prevail over the provisions of the by-laws/rules of the examining bodies regarding examinations. I would like to remind you that the SC in its crucial order maintains that the response sheet, which is evaluated by exam authorities, is a record of information which essentially falls under the purview of RTI.

Further, IIMs also cite commercial interest of testing partners as the reason behind not allowing candidates to access raw scores. On different occasions in past, IIMs have argued that the announcement of answer keys/response sheet or allowing access to raw scores will create confusion among test takers.

None of the above logics stand in the face of the SC order in this regard. The SC order is attached here for your reference.

Why do you compel CAT takers to sign Non-Disclosure Agreement?

CAT was made computer-based in the year 2009. Simultaneously, it was made a multiple-session test, which would be held in 20 to 25 day window. The purpose of non-disclosure agreement was to restrict advantage to test takers who could gauge difficulty level and question types from the experiences of candidates appearing in earlier testing slots.

Now that the testing window has been reduced to one-day-two-session only, there could not be any such advantage or disadvantage to any candidates as a test taker of the second session can hardly get any time to comprehend questions of first session. Thus, the non-disclosure clause becomes irrelevant today.

Also, when Non-Disclosure Agreement (NDA) restricts CAT takers from discussing and disclosing CAT questions or answers, it also means that any anomaly in the question paper like wrong question or wrong answer options can’t be discussed and shared in public. With this clause, you reserve the right to decide if a question asked was right or wrong; and ensure that there is no public scrutiny of your decision.

Thus, the controversial Non-Disclosure Agreement (NDA) for CAT only raises doubts on the transparency of the testing system. Isn’t it time for IIMs to scrap the mandatory non-disclosure agreement?

Why IIMs do not publish normalisation methodology?

What is the CAT normalisation process? How are CAT takers from different testing slots evaluated? How is raw score of CAT converted into percentile?

Though IIMs broadly answer these questions, the specifics of the evaluation process have so far been kept a secret. No authorised explanation of CAT normalisation is available till date.

Further, IIMs claim that CAT normalisation is similar to the normalisation process of Graduate Aptitude Test in Engineering (GATE). Ironically, despite this claim, IIMs do not publish this detailed methodology of normalisation which is publicly available for GATE.

Will you make the CAT normalisation methodology transparent?

Why do not you classify re-testing criteria?

Last but not the least, you have announced that conducting retest is a possibility for candidates who might be affected due to technical glitch or any other test related problems. We would like to know what are the circumstances under which candidates become eligible for retesting? What is the procedure of application for a retest?  IIMs must come clean on criteria for retesting so that candidates may properly understand this, and claim accordingly for a retest in case of any trouble during their tests.

Being an elite league of management institutions, IIMs are looked up to.  You are expected to lead from the front when it comes to transparency. We expect you to come clean on the above issues related to transparency in CAT and IIM admission process.

MBA Aspirants and Educators look for your response on why the IIMs which are held in high esteem, are themselves failing in the transparency test?