The new year continues to bring cheer for the engineering graduate who continues to scale new heights. First a CAT topper and now XAT 2021 topper Ravi Prinshu who scored 99.85 percentile in the latter is all set to make his way to the premier management institutes as he gears up for the next round of the selection process. In a candid conversation with Careers360, XAT 2021 topper Ravi Prinshu talks about the preparation strategy, comparison between the CAT and the XAT exam and urges the future aspirants to prepare for the exam without any stress. 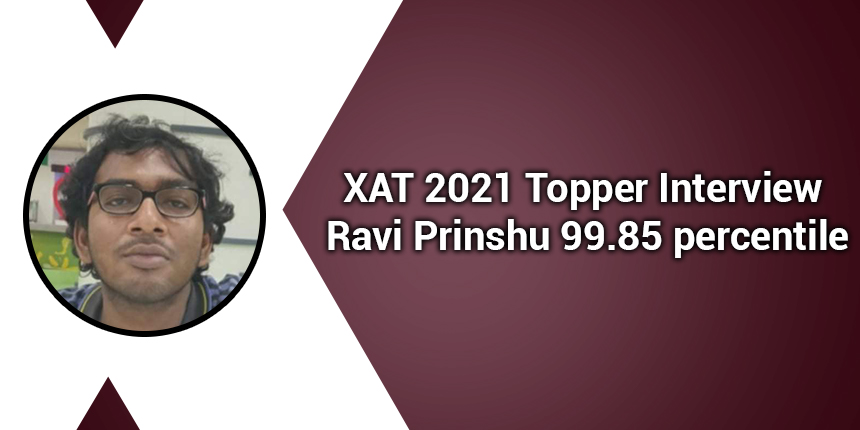 Careers360: Why XLRI over other B-schools?

Ravi Prinshu: It's not about choosing XLRI over other B-Schools . XLRI is among one of the top among the top B-schools with great brand image and placement records. The brand name of XLRI in the corporate world is big.Along with it being from Bihar and completing some part of studies in Jharkhand ,whenever talk of MBA use to come, the name of XLRI use to come to my mind.So this is among one of my personal preferred choices of college.

Careers360: Tell us something about yourself?

Ravi Prinshu: I hail from Bhagalpur and have done my schooling from DAV Public School, Khagaria and Jawahar Vidya Mandir, Ranchi. I am an Electronics and Communication Engineer from Birla Institute of Technology, Mesra.I have a decent academic record with 95% 91.2% and 80.9% in 10th 12th and B.Tech. respectively. After completing my Engineering, I was placed in Cognizant and worked there till November 2020 and left to focus on CAT. Recently I have joined a startup company named Simpragma Solutions.

Careers360: What was your XAT 2021 overall and sectional percentile? Apart from XAT, which other entrances you appeared for and what were your percentiles?

Careers360: When did you start preparing for XAT? Please share in detail your month-wise preparation strategy you followed.

Ravi Prinshu: Actually I started my preparation for MBA in April May . I was working so I could only prepare during weekends. My major focus was to give mocks and analyse them well and work accordingly.

VARC- This was one of my strong areas as I used to read a lot of novels and while preparing for VARC, I used to just give the mock tests. I had attempted all the questions in this section as I was confident that I would do well.

DI and LR - While preparing for data interpretation and logical reasoning, I had taken the test series by Career Launcher since they have sectional questions as well as tipc based questions also.

Quantitative Ability - This section was my main focus as it was one of my weakest. I gave sectionals ,topic tests and mock regularly for this. I searched Facebook groups from where I could get to know about the formulae and their short cut and I could execute them while solving the questions.

I started my XAT preparation once the CAT exam got over . In XAT the question level is little higher especially in VARC and decision making is a new section which is not there in CAT. For these things I just decided to see the mocks and analyse them .

Careers360: How did you manage your time during the test? What were your strong and weak areas? How did you tackle your weak area of the test?

Ravi Prinshu: In XAT time is never an issue . Though questions are tougher but we have ample time to solve it . Personally I started with DM and VARC since these sections can be solved faster . It helped in managing time in Quant easier. I think since I have so much time in Quant that's one of the reasons I scored so well in that even though it's my weakest area. And one other that worked for me was that CAT result was announced a day before XAT exam and I did really well in CAT . So in the XAT exam I was totally stress free.

Ravi Prinshu: Any exam, whichever you are taking, being stress free is always important . Secondly many people think the exam pattern of CAT and XAT is very different but the reality is 2 sections are exactly the same . So do not start with XAT preparation exclusively at start. Once your CAT exam gets over you have ample time to fine tune your XAT strategy.Another thing people say is that XAT is tough but it's tough for everyone . So do not worry about the toughness of the exam just focus on your preparation

How to fill XAT 2022 Application Form - Step by Step Guide

How to fill XAT 2022 Application Form - XLRI Jamshedpur will r...

XAT 2022 registration form will be available in online mode te...

According to your percentile you can get following colleges easily -

You have a very good percentile, as well as your overall marks are very good, so you will not face any problem.

I hope it helps,

The eligibilty criteria for getting admission in MBA is that you must obtain aggregate of 50% at the end of your Degree (50% should be the total of all the semesters which you get in your final year).

And if we talk about your XAT result then 22 percentile is not a satisfactory percentile which the authorities demand through these entrance exams.

Do check the cutoff once for your satisfaction  the link is here:

So I would suggest you to try for an second attempt if you truly wanted to get admitted in a good college.

You have very good  percentile in XAT which is 86 According to previous year cut off of XAT of KJ somaiya institute you have good chances as previous year the cut off was 75 for all the pg courses.Apart from this other parameters will also be counted like personal interview(25%),CA(17%)achievements(8%),work experience(5%),past academic record(10%) and 35% for XAT exam so you have good chances based on your percentile,and CA and PI as these have more weightage  you can visit below for more detail https://bschool.careers360.com/articles/simsr-cutoff/amp

suggest me a cat and xat books or send plz

A Modern Approach to Verbal & Non-Verbal Reasoning by R.S. Aggarwal.

Following are the books of XAT

Following are the CAT books

How to start XAT 2022 Preparation?