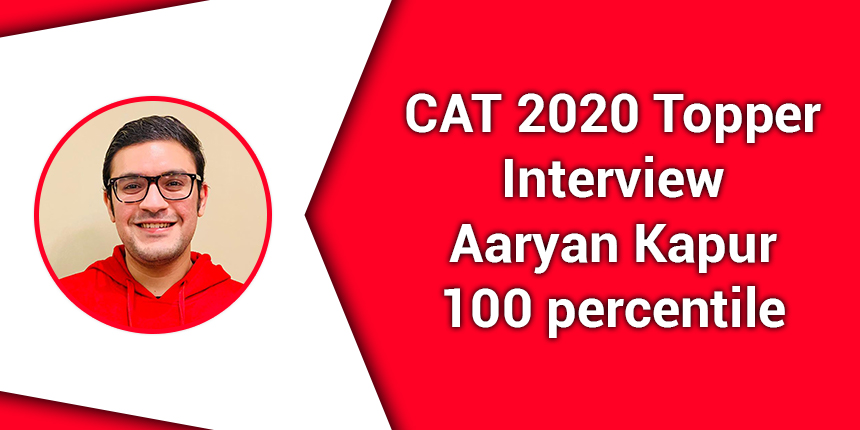 Careers360- Congratulations on securing 100 percentile in CAT 2020! What was your reaction? Were you expecting this?

Aaryan Kapur - Thank you very much! I would have been happy with a 99.8 and expecting the same but the 100 was unexpected and thus even happier.

Careers360- What are your overall and sectional percentile and scaled scores?

Careers360- Tell us something about your background.

Aaryan Kapur - I am a resident of Garhshankar in Punjab. I am a final year student of Electronics and Instrumentation at BITS Pilani. My father is a businessman and my mother is a teacher in our hometown.

Careers360- How was your exam day experience?

Aaryan Kapur - It was filled with anxiety as I had the Slot-1 which meant I did not know the details about the number of questions. For the most part of it, I wanted to distract myself about thinking too much of it. I found my nemesis VARC tricky and which ended up in a slow start to DILR, but I, fortunately, managed to complete it. QA was lengthy again, I was so numb I didn’t even check how much I had attempted.

Aaryan Kapur - “Mock till you drop”, let no one tell you otherwise, are the numero uno source for prep. I took mocks every weekend and analysed them diligently. Analysing CAT mock and fine-tuning accordingly is more important than attempting the mock. I tried to maintain an error log for mistakes I committed and worked on them. In addition to it, I think even a small notebook for smart tips and tricks in quants can be very helpful. I was weak in VARC, hence I had joined a specific course for it. I joined 2 test series and an online coaching class to help me. Plus I was fortunate enough to have an awesome peer group which helped me a lot. Also, previous year papers are very important.

Careers360- What according to you were the toughest and easiest sections?

Aaryan Kapur - In my slot, I think VARC was tricky and DILR was relatively easier than in the other sections.

Careers360- How did you tackle your strong and weak areas?

Aaryan Kapur - As I mentioned earlier, VARC was my nemesis, so I joined a specific course for it. To add to it, I read a few books and articles online and attempted sectionals.

For QA, which was my strongest suit, it was important to not make any silly mistakes, so I focused on my accuracy there.

Careers360- What was your time management strategy with respect to preparation as well as exam day?

Aaryan Kapur - This exam is for MBA, and thus time management is generally required. I was balancing my internship alongside this and studied on weekends for the most part. In the exam, it is important to keep the ego aside and leave the tough questions as the clock doesn’t stop.

Careers360- What was your take on the changed CAT 2020 exam pattern?

Aaryan Kapur - The changed CAT 2020 exam pattern was a new challenge, it felt worrisome at first, but with enough practice, I think one would have been comfortable enough to encounter anything on the D-day. Minutes per question was decreased which shows in the lower scores relatively this year.

Careers360- How helpful was your coaching institute for you? Is it possible to succeed through self-study?

Aaryan Kapur - As I said I needed classes for VARC and another online course for strengthening the core concepts. If someone feels confident enough, and I have seen many friends doing the same, you can succeed through self-study too and one can do away with coaching.

Careers360- What are the factors behind your success?

Aaryan Kapur - My parents have been a strong support system throughout my prep. Plus all the friends, the list is so long, who have supported me and stuck with me. I am thankful to all of them. A huge shoutout to all of them. This is as much their success as it is mine.

Careers360- Have you started preparing for GD/PI/WAT?

Careers360- Which other MBA entrance exam have you appeared/appearing for?

Aaryan Kapur - I have taken XAT for XLRI Jamshedpur.

Careers360- What is your dream B-School? After that, what career do you want to pursue?

Aaryan Kapur - My dream B-schools almost like everyone else, are Ahmedabad and Calcutta. I wish to pursue a career in Finance, preferably Investment Banking at the moment.

Careers360- What are your hobbies?

Aaryan Kapur - I am an avid Real Madrid fan, I have spent many sleepless nights watching them play. Also I follow Formula 1 as well. Recently, I have been trying out baking and cycling as hobbies.

Careers360- What were your relaxation and recreation methods you followed amidst preparation?

Aaryan Kapur- I listened to songs by Satinder Sartaaj or played some games to relax. Also, I used to take a walk if I needed to zone out.

Careers360- Do you have any idol who you follow?

Aaryan Kapur - My family is my greatest idol. I have learnt a lot from them and still have a lot to learn.

Careers360- What is your message for next year's CAT takers?

Aaryan Kapur - Believe in yourself and stay calm. It is ok to be nervous, but it should not rule over you. Build on your low mock scores, and be confident.

How to prepare for PI-WAT rounds of top B-schools – WAT and P...

How to prepare for GK section of CMAT, IIFT, and XAT in 2021

6 days ago
Read More
View All News and Articles

depending on the previous years cutoff, there is a good chance you will be able to fetch yourself a seat at IIT Kharagpur based on your CAT percentile. Some of the other colleges you are eligible to secure a seat in are,

As you are well aware the cutoff for each year differs depending upon various criteria hence to get a more accurate prediction kindly visit the link given below.

is it compulsory to give GAT and CAT to appear for NIFT exam 2022 ?

National Institute of Fashion Technology ( NIFT ) entrance test consists of three phases - Creative Ability Test (CAT), General Ability Test (GAT) and Situation Test.
However if you want to take admission in Bachelor of Technology will have to appear GAT only.

So, yes for nift 2021 or nift 2022, you have to clear the three phases first CAT, GAT and situation test, respectively.
NIFT exam pattern for CAT may include three questions and you will have to answer in three hours. The maximum marks allocated for the exam is 100.

Gat exam will be conducted for two hours and you will get 100 questions. And the subjects will be English Comprehension, Quantitative Ability, Communication Ability, Analytical Ability, General Knowledge and Current Affairs.

my percentile in cat is 59 , female , non eng. should i apply for MNIT JAIPUR?

As per the previos trends for MNIT Jaipur cutoff range was arond 65- 70% . But it can change according to number of candidates applied for exam and candidate joining MNIT Jaipur, The cut off depends upon the number of seats available, the difficulty level of paper and number of candidates writing the examination. And, hence varies every year depending on these factors.

You can apply for this college and prepare for the next step. For more information you can visit the following link.

The NIFT Entrance Test is conducted by the National Institute of Fashion Technology for which you need to apply online.The mode of exam is offline.You can find previous years papers on our website:

Hope this helped you.

ALL THE VERY BEST.

Common Admission Test, in short CAT is conducted by any of the IIM in rotation every year , it is a computer-based entrance exam conducted for MBA/PGDM admissions at 20 IIMs and 1000+ B-Schools in India. Candidates who have completed graduation with 50% of marks are eligible to apply for IIM CAT 2021. As per the new paper pattern the paper is of total 228 marks and it will consists of 76 total number of questions divided in three sections namely VARC, DILR and QA. Out of these 76 questions, 54 question will be of MCQ type and other 22 will be Non-MCQ. For every correct answer 3 marks will be awarded and on incorrect answer -1 will be deducted only from MCQs not from Non-MCQs. For complete exam pattern(latest) of CAT kindly check out the link given below :-

You can get complete information about CAT 2021 from the link given below :-

Don't worry if your Mathematics part is weak because there is no mathematics section in CAT but yes there are some questions of either quantitative ability or logical reasoning which uses basic mathematics and only for the reason that you are weak in Mathematics part you should not leave the CAT exam because everything will give you some experience if you are prepared well for all then you might get good score which can take you to good B-Schools.

So let us discuss how to prepare for above three sections so that we can get the best score which can take us to the best B-Schools of the country.

> For this section your pre-requisite is the complete understanding of basics of Mathematics.

> You should have proper command on topics like profit and loss, number system, geometry.

> Practice as many as sample papers you can and go for some mock tests as well.

For complete details about preparation of QA section kindly check out the link given below :-

> Reading skill is the pre-requisite for this section, so try to read different English story books, magazines, etc.

> Go through newspapers, journals, blogs, articles, etc to enhance your reading skills and watch some English visuals such as English News, web series, movies and likewise.

> Try solving questions based on comprehension, inferences and para jumbles. You can purchase some booklets for the same from market.

For complete details about preparation of VARC section kindly check out the link given below :-

> This section seems to be the toughest section in CAT exam, but it is not if you practice a lots of questions on logical reasoning and practice solving different hard core problems so that your problem solving ability will increase, which is the pre-requisite for this section.

> Go through some basic topics like seating arrangements, blood relations, syllogisms, etc to get familiar with this section.

> For complete details about preparation of DI&LR section kindly check out the link given below :-

SNAP Result 2020 (OUT): Get Score Card and Know Steps to Download Results