XAT 2016 - Xavier Aptitude Test (XAT), conducted by XLRI Jamshedpur, is one of the biggest national level MBA entrance exam aspired by the majority of the MBA aspirants. Last year the exam was taken by over 90,000 candidates. XAT 2016 scores are accepted by XLRI Jamshedpur and 140 B-schools across India for admission. XAT 2016 was conducted on Sunday, January 3, 2016. The official answer key for Paper 1 and Paper 2, along with explanations have been declared by XLRI Jamshedpur. The result has been declared on January 26, 2016. After the analysis of the Answer Keys, it was found out that there was a wrong question in the question paper, whose answer did not match with any of the 4 answer options. As per XAT officials, Question No 77 (Set A) in the XAT 2016 paper had none of its options correct. 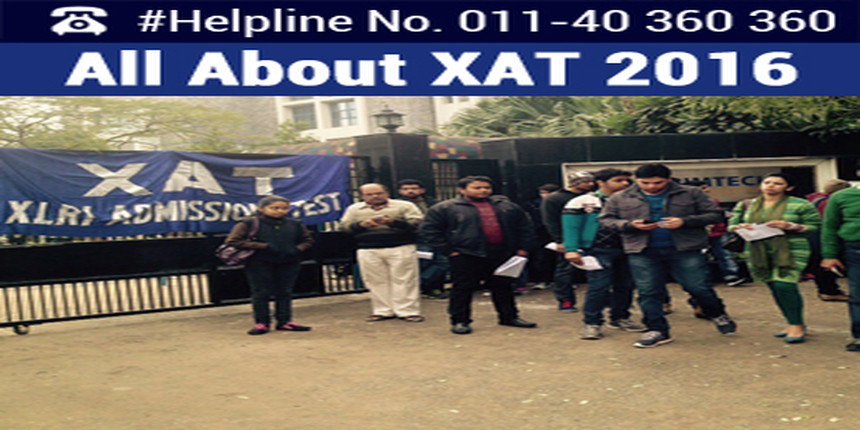 On January 22, XLRI had released the OMR Answer Sheets of each candidate where the test takers could check their sectional and overall scores. The result is expected to be declared in the last week of January, 2016. The final result shares the sectional and overall percentages and percentiles of the candidates.

XAT 2016 Eligibility: The XAT 2016 aspirants should be graduates in any discipline from a recognized university or institute. Final year students would also be eligible to take XAT 2016 provided they complete their final exam by June 10, 2016.

XAT 2016 Exam Pattern: XAT 2016 has gone through some of the changes. The Paper 1 of XAT had 78 questions to be attempted in 170 minutes. This paper had 3 sections - Quantitative Ability & Data Interpretation, Verbal Ability and Decision Making & Analytical Reasoning having 26, 23 and 29 questions respectively.

Paper 2 had general knowledge and essay writing questions. There were 25 questions to be completed in 35 minutes. The difficulty level of XAT 2016 was easier to attempt. There had also been a few changes in the marking scheme. After 13 un-attempted questions, there will be a negative marking of 0.05 marks from  the 14th question onwards. There will also be negative marking of 0.25 marks for any wrong answer.

Date of commencement of application: September 4, 2015

XAT 2016 Result: The result has been declared on Tuesday, January 26, 2016. Although the date was not announced initially, it was expected that the result would be out by the third week of January. The scores of the candidates were announced on January 22 in the form of the OMR Answer Sheets. The overall and sectional percentages and percentiles have been declared in the score cards.

How to prepare for XAT 2021 while working?
View All Articles

XAT 2021 Preparation Tips from Toppers - Know how to prepare f...

XAT 2021 Question Paper - Know the details related to the ques...

can we get admission through cmat xat and mat in pgdm in pr and event management?

University of Technology and Management

So this are the colleges which accept CAT/MAT/XAT

IF I HAVENT GIVEN ANY EXAM LIKE CAT,MAT,XAT E.T.C THEN , HAVE I ANY CHANCE TO GET A SEAT IN MBA

You can give the May MAT 2020 Entrance exam. Many colleges do accept May MAT Score. You can look for the IILM Lodhi road as one of your options. IILM Lodhi road is the oldest campus located in central Delhi. The alumni base is phenomenal which is a strong strength. The alumni of IILM are placed in a very senior position in the corporates that gives an advantage to the institute both in terms of placement, industry connections and engagement. Senior alumni conducting placement workshops, delivering guest lectures and guiding summer projects could be very useful to students with work experience and industry mentors. There are a lot of foreign partner institutes and semester exchange students from around the world make classes diverse and interesting. Faculty members have got both industry and international exposure which makes classes more interesting and relevant. With a huge alumni base of 12000+ with most of them at senior positions. The faculty-student ratio is the best here, a lot of one-on-one mentoring is provided to develop student personalities, CVs and also prepare them for the selection processes. We have some of the good companies on campus for SIP & placements like Amazon, RB, ICICI, Oppo, HDFC, Loreal, Khimji Ramdas, Modelez, Deloitte etc.

what is the success rate of CAT/XAT?

Hello
CAT and XAT exams are conducted every year for admission to MBA courses in IIMs and other top Bussiness schools of the country.
Every year around 2-3 lakh students apply for this exam for admission to premiere institutions of the country.
Sucess rate means the number of students passing the exam per 100 students who appear for it.
For CAT the success rate is around 2% i.e around 2 out of every 100 students who appear clear this examination.
However its better to focus on preparation.

Follow this link for more information on CAT and preparation tips
https://bschool.careers360.com/exams/cat

Should I stop preparation for entrance exam and focused on remain 10+2 board exam as I heard that due to corona virus covid 19 universities can be cancelled the exam and noticed that the admission will based on 10+2 marks?


Let me assure you one thing that there is absolutely no chance of admission in engineering colleges based on class 12th board examination.JEE mains is postponed not canceled and even if gets cancelled there is no way that admission will take place based on 12th marks.So, just forget about these thing and focus on preparations because sooner or later all the exams will take place once the Covid-19 situation gets under control.

sir presently I am pursuing English Graduation from IGNOU as a final year student and my final exam will be held on June 2021.. Am I eligible to fill forms of cat xAt?

You can fill the exam form of the CAT 2020 if you are in your final year in the year 2020. As you are to be graduated in 2021, that means that you will be in the final year, 5th semester during the CAT 2020 exam form and therefore you are eligible for the exam.