It’s not everyday that one comes across someone who has cracked and aced a myriad of MBA entrance exams in a single attempt. Meet Rohan Joshi, an engineering graduate from Mumbai who outshined in CAT 2017 with 99.63 percentile and went on to secure 99.96 percentile in MAH-CET 2018. He bagged AIR-37 in MAH CET 2018 and appeared for GD PI WAT rounds of top B-schools in India like MDI Gurgaon, IIM Kozhikode and Calcutta. He is yet to appear for the selections at FMS Delhi and JBIMS Mumbai. Rohan understands the pith and core of the MBA entrance exams which he has shared in this interview with Careers360 for the benefit of future aspirants. 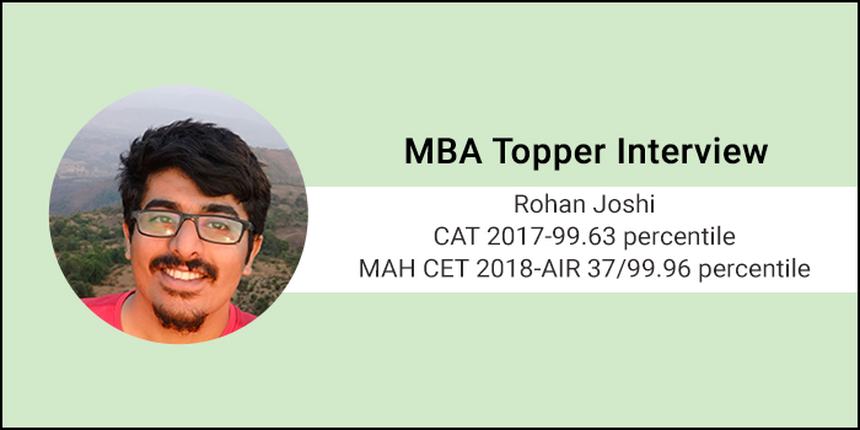 Rohan started preparing almost nine months before the actual test when he understood that the Two-Year MBA program would be a value addition in terms of skills and knowledge, better perspectives, career development and networking. He feels that one must enjoy solving puzzles and do them regularly to get habituated to the Data Interpretation and Logical Reasoning section. He started giving mocks and worked upon his weak areas thereafter. Mocks are the single most important aspect of the preparation as far as CAT is concerned, he says. For both the exams, he adopted a common strategy of solving easy questions first. He recommends that random guessing during PI rounds is clearly a no and answers must be backed up with some reasoning each time. Know more about the topper’s success mantra, exam strategies, WAT GD PI experience and how he maintained a balance between his job and exam preparation.

Careers360: Tell us about yourself in terms of your academic and family background, work experience etc.

Rohan: I graduated in engineering from VJTI in 2016 from VJTI, Mumbai. From there I had two professional stints – one at a proprietary trading firm as a trader and other with an Ed-Tech startup.

Careers360: Why and when did you decide to pursue MBA?

Rohan: I was fortunate enough to get into finance directly after my engineering. I started seeing things with a business perspective. I understood that the Two-Year MBA program would be a value addition for me in terms of skills and knowledge, better perspectives, career development, networking, etc.

Careers360: Which MBA entrances did you appear for and what are your scores and percentiles?

Careers360: Which B-schools have shortlisted you for the WAT/GD PI rounds? How many have you already attended?

Rohan: I have received calls from IIM Calcutta, IIM Kozhikode, FMS Delhi, MDI Gurgaon, etc. Apart from GD PI  rounds at FMS, I have completed rounds of all other institutes. JBIMS will be conducting admission through CAP process so no PI will be conducted.

Careers360: Please share your WAT/GD-PI experiences which you have attended so far, in detail.

Rohan: IIM Calcutta had a WAT-PI process and no GD. WAT topic was on Indian education system for which we were given 25 minutes.

IIM-K and MDI-G had all the three rounds - WAT, GD and PI. The WAT topic in IIM-K was ’Agriculture vs Manufacturing sector in India’. WAT topic in MDI was ‘Protectionism vs ‘Globalisation.’ The topic of GD was same as WAT for both the institutes.

All the three interviews were stressful.

Careers360: How have you prepared for these rounds?

Rohan: A lot of introspection is needed to prepare well for the interviews. One must be clear about how an MBA would be helpful and how does it fit into one’s short term as well as long-term goals. I worked on these aspects, read extensively on current affairs, global happenings and gave a couple of mock interviews.

Careers360: What are the questions you have been asked during PI?

Rohan: There were questions about why do I want to do MBA. I was asked about my hobbies. In all the three interviews I was grilled with questions based on my work-ex and other profile details.

Careers360: Were there any questions which you were not able to answer? How did you tackle them?

Rohan: IIM Calcutta is known for asking tough mathematics questions in the interviews. I was asked probability questions but couldn’t answer all of them. After trying for some time I just told the panel that I’m not able to get the answer. It is always better to say no to questions whose answers one doesn’t know.

Careers360: Any interesting question or incident which you enjoyed answering?

Rohan: In my IIM-C interview there were 3 panel members. I was told that 2 of them are professors and the other one is from the industry. I was asked to find who among the three was from the industry. This was a tricky question. Main motive behind such question is not to know the right answer but the approach in answering the question. Random guessing is a clear no. Answers must be backed up with some reasoning.

Careers360: What was your strategy for cracking the entrances? From when did you start preparing and what was your approach?

Rohan: I started preparing almost 9 months before the actual test. First thing I covered was the basics for quants and verbal. To prepare for Data Interpretation and Logical Reasoning, I feel one must enjoy solving puzzles and do them regularly to get habituated. Then I started giving mocks and worked upon the mistakes and weakness after every mock. Mocks are the single most important aspect of the preparation as far as CAT is concerned. For CET I didn’t give any mocks as had already prepared for CAT but practiced some visual reasoning questions as they are not asked in CAT. For both the exams there’s one common strategy of solving easy questions first.

Careers360: How did you balance time between your job?

Rohan: In the end, these entrances are just aptitude tests. I used to give practice tests and sectional tests during weekdays. During weekends I gave full length tests and analyzed them. In parallel, I kept working on my weaknesses and the areas which I wasn’t comfortable with.

Rohan: It is very important to be calm on the examination day. I was prepared to be ready for the worst in terms of the difficulty level of exam, and the DILR turned out to be arduous. A composed mind helped me avoid being tensed and ace the exam. I made sure that I didn’t spend too much time on a single question.

Careers360: What is your advice to the MBA aspirants preparing for next year's CAT and other tests?

Rohan: Firstly, believe in your abilities and do not consider CAT as an extremely tough examination. Be super disciplined, prepare well, work on developing the ability to grasp and apply concepts in different scenarios. Know your limitations and work on how to overcome them. Remember that it is the difficult path that leads you to a better place.