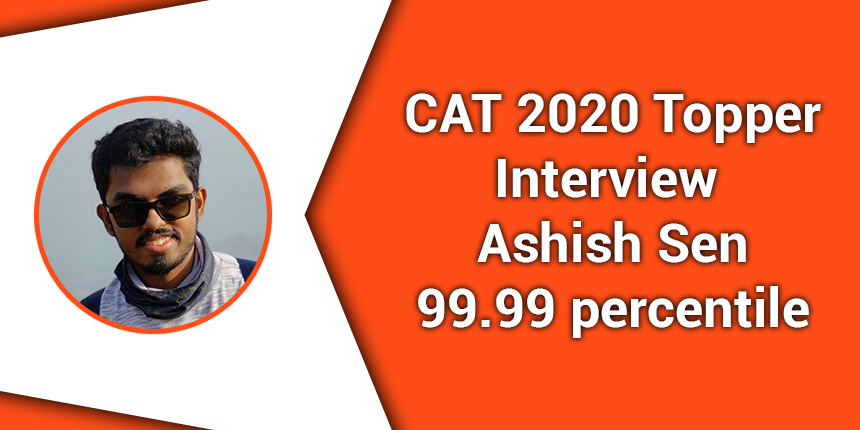 Careers360 - Congratulations on securing over 99.99 percentile in CAT 2020! What was your reaction? Were you expecting this?

Ashish Sen - Thank you! If someone had told me three months ago that I would be scoring 99.9+ in CAT 2020, I would have laughed it off. But my exam went well and after the answer key was released, I knew that I would get a high percentile, but 99.99 was not expected and I was really on cloud nine.

Careers360 - Tell us something about your background.

Ashish Sen - I am a Mechanical Engineering graduate from IIT (BHU) Varanasi. I am currently working as an Analyst in Deloitte Consulting (Offices of the US).

Ashish Sen - Exam day was really smooth. I was allotted slot 2, so I got to know about the number of questions asked section-wise in slot 1 from some friends of mine. So, I had a rough idea of what to expect. The other procedures before the test were seamlessly executed by the team. Proper precautions were taken and social distancing was maintained at the CAT 2020 exam centre.

Ashish Sen - My preparation strategy was different for all three sections. For QA: I first focused on strengthening my concepts in all the topics asked in CAT, for this I completed the entire module provided by TIME, after which I was pretty confident about my Quant. For DILR: I didn't have to work much on this section as I already had a knack for solving such problems.

All I did was practice CAT-level questions by sectional tests, previous year papers, etc. VARC: This was the section that troubled me a lot in mocks and I put a lot of effort into it. I used to read articles daily from sites such as aeon (aeon.co) and aldaily(aldaily.com). Along with that, I used to solve at least 3 RC Passages daily. Consistent practice improved my performance in this section considerably.

After a basic level of prep was reached in all sections, I started giving mock tests and then analyzed them to identify my strong and weak areas. I gave over 40 mock tests. I believe that giving mocks were the most important tool in my cat prep.

Ashish Sen - Honestly, I'm not a good judge of tough or easy, But the VARC section seemed tricky to me. There were a lot of close options and anyone could end up being on the wrong side. I felt that the quant section was relatively on the easier side.

Ashish Sen - I identified my strong and weak areas using mock tests. I paid special attention to my weak areas and took topic wise tests to improve on them. I also learned from the video solution of the mock tests on the best approach to be taken in such cases.

Ashish Sen - My major prep was during weekends, as I was working along with my prep but I had some daily tasks/exercises that I would do without fail like reading one article, solving some RC Passages, Solving one quant exercise, etc. Apart from that, a major chunk of my prep (mostly the mock tests and their analysis) were done on weekends. For the Exam, I just keep an eye out for the timer, so that I don't end up spending too much time on one question. Also, I had kept the last 12 mins of the VARC section solely for the VA questions irrespective of how far I had progressed on the RC part.

Ashish Sen - Initially I was frustrated with the change in the CAT exam pattern as I had given many 3 hr mock tests and my time management strategies were suited to that pattern, but then I took it up as a challenge, rejigged my strategies, and adapted to it. Also, the 2 hr test meant that I could do more mock tests, So that gave me more practice.

Ashish Sen - I was not a classroom student of any coaching, I prepared through self-study, but I was a test series student of TIME, IMS, and CL (Again, these test series helped a lot!). So,

Careers360- What are the factors behind your success?
Ashish Sen- I would attribute this success to the support and the motivation from my parents.

Careers360 - Which other MBA entrance exam have you appeared/appearing for?
Ashish Sen - I only appeared for CAT.

Careers360 - What is your dream B-School? After that, what career do you want to pursue?
Ashish Sen - My dream B-School is IIM Ahmedabad. Post that I would love to pursue a career in consulting, and hope to get an opportunity to work in one of the MBBs.

Ashish Sen - I like reading fiction, I am learning to play guitar, apart from that I follow Formula1 and Cricket.

Ashish Sen - I used to watch F1 races or spend some time on my guitar to unwind myself. Apart from that, I would call up some of my friends or talk with my mom/dad whenever I wanted a break.

Ashish Sen - Strive to develop a proper concept base for the QA section. Be thorough with all the topics that are generally asked and then keep on practicing. For VARC, start early and read good articles to improve your reading speed as well as to augment your inference power. Try to maintain consistency in your prep and you will be good to go.

CAT 2020 Topper Aruneet Dutta Says, "In CAT not only knowledge...

If you are looking to get admission in top MBA colleges and go...

With your overall 95.34 percentile in CAT you have  chances in following  B schools which are listed below :-

Can an indian black cat commando quit his job at age 30??

Yeah! You can but for that you have to apply to your governing authority. After clearance of your request you can leave the job.

I hope my answer helps. All the very best for your future endeavors!
Read More
Answer

Will Delhi University be taking admission via merit this year along with the common aptitude test?

Delhi University Admission 2021 will start in the month of March 2021. An entrance exam known as DUET is organised by NTA (National Testing Agency) to offer admission in various UG and PG programmes in the University.

Merit based admission fees is

Entrance based admission fees is

You can refer to this link for more information.

IIM Ranchi HR program is one of the best in the country and you should not miss the chance if you have got the opportunity. The placement report of the college is stellar (see link below)

You have decent academics and should not face any issue in getting shortlisted for companies. Do not make the decision solely based on the fees or the ROI ratio. The main purpose of doing an MBA from a reputed college is to get a headstart in your career and start your career in management from a top tier company. It will be your launchpad into the corporate world and then you are free to explore on your own.

The post pandemic scenario should not haunt us for too long and the industry will be on its feet in no time. I would urge you to consider this as a good opportunity and consider admission this year only.

Getting a call from a B- School depends upon a number of factors like  your percentile  score in CAT and academic profile i. e.percentage of marks obtained by you in  class 10th, 12th and graduation, work experience. Your academic profile is average

With your overall 89.78 percentile in CAT you have  chances in following B schools which are listed below :-

Which B-schools can I get if my CAT percentile is between 90 and 100?