CAT 2018 Convenor Interview - The application process for CAT 2018 has begun on August 8 and will end on September 19. While candidates are busy preparing for the exam, the CAT 2018 Convenor, Prof. Sumanta Basu, who is also the admission chairperson of IIM Calcutta, is preparing to administer the biggest MBA entrance exam of India in a glitch free manner. In an exclusive interview with Careers360, Prof. Sumanta Basu speaks about the exam pattern and how candidates should prepare themselves for CAT. 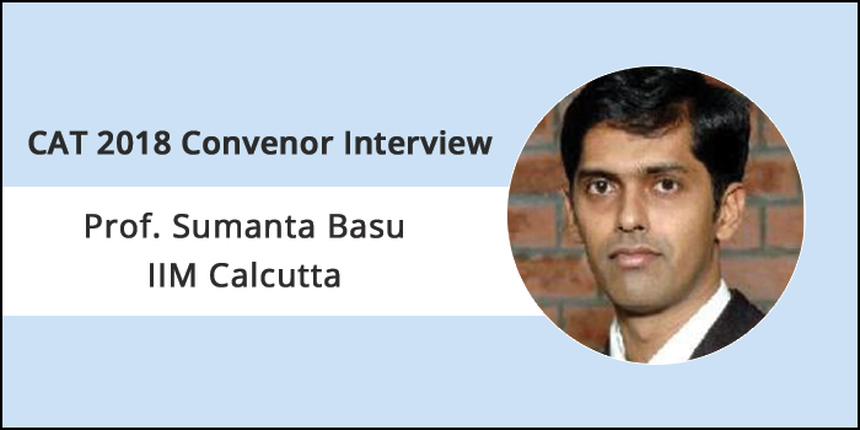 According to Prof. Basu, the CAT exam pattern has reached a stable stage. While IIMs strive to bring diversity in classrooms, there is no compromise on the quality. “We expect academic diversity to play a significant role in improving the management education. That does not mean that the difficulty level will reduce,” says Prof. Basu. Read the full interview below.

Careers360: Unlike the previous year, you have kept the CAT 2018 pattern unchanged this year. What is your thought process behind the same?

Prof. Basu: As I have already mentioned, the broad pattern will remain unchanged as the relevant team will attempt to address the concerns through the question making process itself.

Careers360: Since the exam pattern has remained same, will the difficulty level go up this year?

Prof. Basu: Difficulty level has a subjective interpretation based on candidate's competency set, preparedness etc. The concerned team will attempt to check the relevant skillset of a candidate that are relevant to managerial aptitude, analytical acumen etc.

Careers360: Last year, experts and students shared the view that the difficulty level of CAT was easier, making it more conducive for candidates from non-engineering background. As a result, three candidates belonging to non-engineering education background secured 100 percentile. What is your take on this?

Prof. Basu: We expect academic diversity to play a significant role in improving the management education. That does not mean that the difficulty level will reduce. It expands the role of entrance examination to reach to a broader set of candidates without compromising the quality.

Careers360: What cautions do you suggest for candidates while filling the application form for CAT 2018?

Prof. Basu: Candidates may fill the application form in multiple attempts within the timeline mentioned.

Careers360: Over the last two years, CAT application numbers have increased much compared to the previous years. Do you think CAT 2018 applications will outnumber last year’s applicants?

Prof. Basu: We hope that happens. It indicates that the examination is able to reach to more number of candidates and it increases the chance of getting more suitable candidates. It is happening because of the continued attempt of obtaining geographical expansion (in terms of more number of cities) and of reaching to more prospective candidates through multiple relevant websites like Careers360.

Careers360: The application process of CAT 2018 had started on August 8, 2018, how has been the response so far? What is the total number of registration vis a vis application received so far?

Prof. Basu:  The total number including the of registrations and applications crossed one lakh and we expect an upsurge in the latter half of the deadline.

Careers360: The application process was stalled from August 26 to 27. What was the reason for this, and do you plan to extend the application deadline owing to this?

Prof. Basu: This happened because of some internal process improvement. As of now, there is no change in the deadline but we will see the situation once the deadline is approaching and accordingly deliberate on these issues. The convenience of the candidates during the registration process is of importance to us.

Careers360: Would the candidates get an option to correct the application form information? If yes, what is the schedule for the same?

Prof. Basu: Candidates may get an opportunity to upload photos of better quality in case the currently uploaded photo is not of acceptable quality. Otherwise, candidate may not be able to get an edit window option considering that a candidate is given the choice to complete the application form in multiple attempts with a preview option before submission.

Careers360: As the CAT Convenor, what are the aspects which you want to improve in the test administration?

Prof. Basu: We seek fair, transparent and secure examination in CAT. We also look for increasing the convenience of the candidates in the test day by assisting them in whatever way possible.

Careers360: In a first, the CAT 2017 Question Papers and Answer Keys were released by IIM Lucknow last year. Do you plan to release the documents this year?

Prof. Basu: The concerned authority is working on this issue. This information will be updated once decided.

Careers360: What is your message for the CAT 2018 aspirants?

Prof. Basu: In order to succeed in a test like CAT, strong basics is a must. Hence, focusing on fundamentals will help students preparing for CAT 2018.

8 minutes ago
Read More
View All News and Articles