IIM Personal Interview - How to tackle questions related to your hobbies 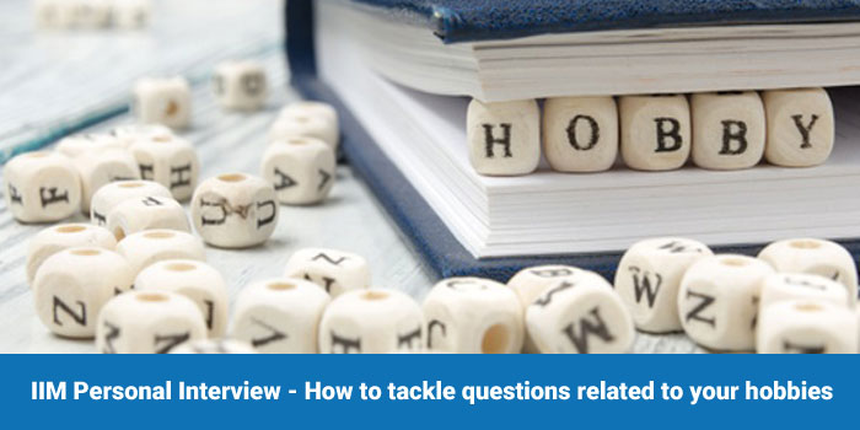 Questions in interviews for IIMs are not merely confined to academic qualifications or professional experiences, but also include those related to your hobbies. It is important that while mentioning one’s hobby, the candidate must be thoroughly aware about it and should answer the questions well. Careers360 brings to you some of the experiences of the candidates related to hobbies so you know the tricks and strategy to face and tackle questions on hobbies.

To answer with ease, do not fake your Hobby

Every individual tries to follow his or her hobbies during their leisure time. However, if one is facing an interview to make it to the IIMs, it is important that the individual does not fake it. At the same time having a thorough knowledge about your hobby does not guarantee you a seat in the IIMs.

Debapriyo Sarkar, who made it to IIM Ahmedabad tells us about his experience on Quora with regard to his hobbies. From the given example, we can see that the candidate was fully aware about his hobby, which was reading books and was able to answer the questions convincingly.

Here we see that the candidate was able to answer to any query of the panellist with ease and without hesitation. He was not beating about the bush.

Sarkar had a very clear thought process. It is important to remember that you just have few minutes to make an impact on the interview panel. Hence, you should be thoroughly prepared. Since sky is the limit for preparing for interview, you must select a few topics with regard to hobbies and devise a plan of action for its preparation.

Sometimes the candidates go through stress interview and they believe that they would not be able to make it to the IIMs. However, the result is just the opposite. At the IIM Ahmedabad interview, towards the end Sambit Debnath, who finally made his way to the coveted institute, was asked to convince the panellist that he was a guitarist. There was no guitar in the interview room.

On Quora, Sambit, narrates his experience about how he showed to the interview panel that he knew how to play guitar.

Earlier, Sambit was low on confidence as according to him the first round of interview was quite stressful. Since, there was no guitar in the room, Sambit was mulling to show them a video on his phone, little realising that they were not allowed to bring their phone inside the interview room.

It was suddenly that Sambit recollected his composure and gave a more than satisfactory answer to the panel. The end result was that he was able to make his way through IIM A.

Need not be an expert in your hobby

A thorough understanding of your hobby is not a guarantee that you will be able to make it to the any of the IIMs. Amit Singh was able to answer the questions about his hobby pretty satisfactorily at the IIM Lucknow interview. The hobby quoted by him was slightly different from what the candidates normally mention such as reading or any particular sport that they pursue.

Amit Singh mentioned on Quora that he had stated ‘Ophiology’ as the hobby, which means the study of snakes. Singh was expecting to be asked questions on ophiology at other IIM interviews. The panellist enquired what it means and then asked him what would happen to an individual if a snake bites him or her.

Though the candidate was able to explain what his hobby is all about. However, making an assumption in an IIM interview is not correct. Singh assumed that in case the question is tricky, then the best way to get away is by stating ‘It depends.’

Singh was asked by one of the panellists as to how much time will it take for him to die. It seems from the answers that are mentioned by Singh on Quora that there was a monologue for almost a minute, where Singh thought that he was in the safe boat as he used “ It depends” to answer every aspect of the question.

Singh was not able to make it to the IIMs, may be because he had either not performed well in the CAT exam or had not answered the other questions upto the satisfaction level of the interview panel. Even in the hobby question, while answering it, there was a monotony. One must remember that, if one is well versed with something in that case the candidate must confidently share the knowledge in an interactive manner.

In India, a large section of the population is cricket buff. Hence, it is important that when a candidate states that cricket is his hobby, he is able to explain it properly. Nishant , who made his way to IIM Ahmedabad in 2015 had stated that he was fond of analysing cricket. Nishant had mentioned on Quora that the panellist who quizzed him about cricket seemed to be very stern and was not among those whom you could take for a ride.

Hobby is something, which each individual enjoys during his or her leisure. Hence, it is important that the candidates, while mentioning their hobbies should explore various questions and answers. At the same time, they should keep their cool while answering questions on hobbies. While answering such questions, candidates need to show how passionate they are about it. Last but not the least, at no point of time, candidates should talk in a frivolous manner about their hobbies.

How to tackle basic questions at B-School interview

What B-schools look for in a Candidate