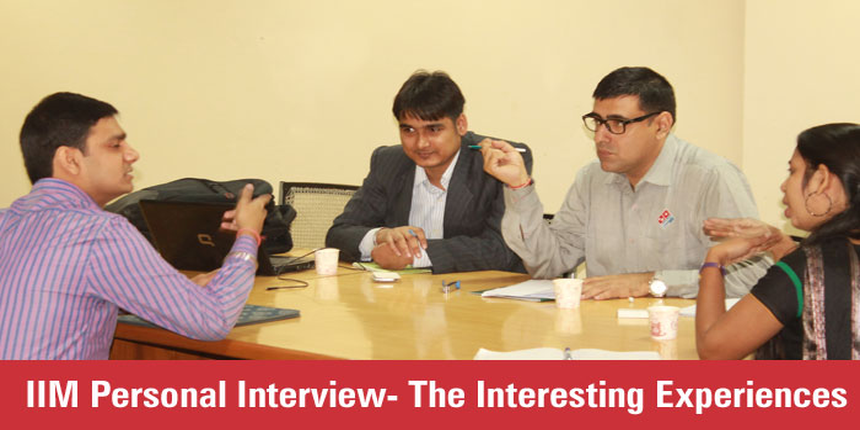 Aspiring management students, who wish to make their way to the coveted Indian Institute of Management (IIM) have to undergo through personal interviews after they overcome the herculean task of clearing the Common Admission Test (CAT).

Those who are able to get admission to the IIMs, recall their interview as a memorable one, while those who are grilled and fail to make it to an IIM prefer to forget it. IIM Personal Interview Experiences by Careers360 showcase the forgettable and unforgettable experience of the students.

The personal interview round is the key stage of an IIM admission process. It is during this final round that the interview panel, at times, grills the candidate about his academic background, professional qualifications, and his general knowledge.

Vinayak Kudva, Head – PG India & Mumbai Region, IMS, on why PI is important says, “A personal interview is the last step to get to know the candidate well. Personality traits that cannot be uncovered through Entrance tests, GD or WAT are evaluated here. The selectors try to understand the candidate’s personality, his/her interests, motivation, aspirations etc.

If you are starting your preparation with the personal interview (PI) the experiences shared by the successful students of the IIMs will prove to be a boon.

Describing each IIM interview unique, Raghav Sehgal, on Quora, says that the interview process of each IIM varies. He opines, “Each one of my interviews was unique and different. I was asked stuff ranging from railway engines, cold war, and geopolitical issues resulting in WW3, cricket, cooking, my academics, entrepreneurship, ethics and what not. They want to know how genuine you are and whether you will be a better person with the education you get.”

Sharing an interesting experience of impressing the interviewer by unexpectedly responding to one of his questions, Anirban Mukherjee, IIM Calcutta says that at times what matters is just answering one of the random questions posed by the panel. Recalling the question, which proved to be a turning point and got him an admission in the IIM, Mukherjee says, “Panel: Name the other Republican candidates. Me: Ted Cruz, Marco Rubio, Jeb Bush. Panel: (delivers a killer burn) Well you could have supported Bush because sometimes you beat around the bush. Interview over, and IIM Calcutta seat booked.”

Another Quora user, Parth Shah, presently studying at IIM Ahmedabad, talks about the response which turned the table in his favour. He shares, “Interviewer: So you play chess. Answer these questions as fast as possible. He had a tablet in front of him. He asked me 15 questions on chess from it which included some like, what is FIDE rating, how is it defined, Against whom Anand lost recently, Anand's rating, Carlsen's rating, my chosen first move, E4-C6 is called what, Fool's mate, Queen's gambit... I answered all questions correctly. “

Sometimes the interviews to IIMs are a cake walk, while on other occasions, it proves to be a nightmarish experience. Sanath Sunny, who despite being selected in IIM Indore, was on tenterhooks till the final result was out as the interview panel grilled him.

Syed Naser, 98 percentiler in CAT, states that interviews are at times a roller coaster ride. But one must always stay confident before the interview panel.

In one of his interviews he was asked a number of questions, to which he did not know the answers. He shares, “One of the interviews went off the course at the very beginning and that roller coaster was my worst experience. I was asked how is the President of India elected? What is the difference between a republic, democratic and sovereign country,? Discussion revolved around Telangana. I was asked about similarities between Chattisgarh and Telangana. One of the questions, which came out of the blue was the National Anthem of Bangladesh(I was asked this question as I had said that I love poetry)...I was completely taken aback as I had no clue about the answer to these questions.

Another candidate who shared his ordeal on Quora was Ankur Garg, who during an interview for IIM, Lucknow was asked if he was from an “Upadravi gotr’(‘Upadravi’means an anarchist). The term was used by Kiran Bedi, when she was competing against Arvind Kejriwal during the 2015 Delhi assembly elections.

Amit Singh expresses his anguish on Quora on how the interview panel at IIM Lucknow gave him a tough time about his hobby ‘Ophiology.’ Despite answering the questions to his satisfaction level and getting positive acknowledgement from the panellists, Singh was rejected.

Though it is a dream for every candidate to make it to the prestigious institute, however, a rejection should not affect his or her confidence.  With the passage of time, it is the experience that you acquire while working.

What B-schools look for in a Candidate

i havent mentioned in 12th boards that i belong to obc cat. so if i will mention it while filling mains form ,will i be eligible for obc cat.

all the best for your exam.

What can be my expected rank( both CRL and cat) if my category is SC and jee main Jan score is 95 percentile.

Hello!!
You may calculate your expected rank by using the formula :
Rank=(100-your total percentile score)* (869010/100) where, 100-your total percentile score is the percentage of people ahead of you. 869010 is the number of students appeared for exam. As it is difficult to predict your actual rank your expected rank is 43450..However, your score is great.. congrats for your success buddy!! So, You can check out for colleges based on your rank using our career360 college predictor and here is the link provided below just go through it:

does NITIE has sectional cutoff for cat?

NITIE considers only the overall CAT percentile and doesn't have any specific cutoff for each section. The shortlisting is strictly based on your performance in CAT. It requires a minimum of 97 percentile in CAT and 60 percent in graduation for general candidates. For reserved candidates it is 75 for OBC and 65 each for SC and ST. But even for reserved candidates it is always better to score more than 80 percentile to be on a safer side as NITIE is a tier 1 college and there's always a huge competition for that.

You can definitely get a call from the newer IIMs like Ranchi, Trichy, Kashipur, Rohtak and others like Bodhgaya, Sambalpur, Sirmaur, Jammu and Vishakhapattnam. You have an excellent profile and a very good CAT score hence you should also consider some older colleges which have a good reputation in industry and are highly trusted by recruiters.
Check out these colleges

They offer an excellent placement and considering your profile you'll be easily able to bag an average compensation package of 10-15 lakhs.

You can calculate your overall rank using the formula

We don't have category ranks now.

Link for using college predictor is given below