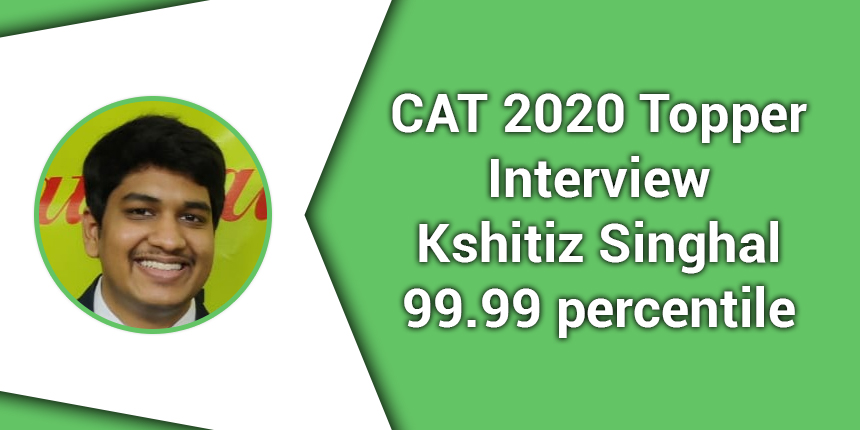 Careers360 - Congratulations on securing over 99.99 percentile in CAT 2020! What was your reaction? Were you expecting this?

Kshitiz Singhal - I was not expecting this at all and I was shocked to see my result. I just started preparing for CAT 2020. I was only focusing on the placements since I am in my 4th yr from IIT Bombay. I didn’t plan it, I just gave it as a mock.

Careers360 -Tell us something about your background.

Kshitiz Singhal - I live in Ahmedabad, and academically, I am graduating in mechanical engineering from IIT Bombay. I am always exploring opportunities, I am a stand-up comedian. I was Mr Fresher in the first year and I do open mics in Mumbai.

Kshitiz Singhal - Honestly, it was frustrating, since my CAT 2020 exam centre was 40 kms away, which took me 2 hours to reach, the COVID-19 scenario was challenging, the masks were problematic since they were itching. Since the CAT exam pattern 2020 has been modified, the number of questions have been increased and the duration of CAT 2020 decreased, so it was difficult to answer all the questions. But, being used to pressure, I was calm and it helped me in maintaining speed.

Kshitiz Singhal - My preparation strategy was to have fundamental knowledge, a good strategy. Since my Quant and DILR were strong, I gave more importance to the CAT 2020 mock tests. Apart from that, I started analyzing the CAT mock tests 2020, I gave 6 to 7 hours in analyzing them, I analyzed the wrong questions. Found various other better methods to attempt the correct answers and then practised those various methods. Basically, I was experimenting with the methods till I got the best and easiest method.

Kshitiz Singhal - Being an engineering student, VARC was quite tough for me. But I won’t say that Quant and DILR were easy, they had random questions, they were moderate.

Kshitiz Singhal - I think that the strong areas don’t become weak, so the weaker areas are what I approach. I practise, give various tests, be it sectional or topical tests, I learn how to get the wrong answers right and other such details.

Kshitiz Singhal - To be honest, the lockdown due to COVID-19 was a golden opportunity to practise, since my classes were held in online mode, there was extra time to work on CAT 2020 preparations. In the beginning, I used to give 4 hours to practise and then I increased the practice duration. I was being regular, since being regular and giving 4-5 hours a day to preparation were enough.

On the exam day, I attempted the easy questions first. I knew that out of 4 passages, 1 passage will be tough, so I didn’t attempt it. Then I tackled the hard questions later.

I mistakenly gave a lot of time on one question. I felt like CAT exam 2020 had easy questions but they were time-taking. What students do is that they take it on their ego to solve it. But being in IIT Bombay, I knew that attempting as many questions as possible was the key.

Kshitiz Singhal - I think it was difficult for everyone as you have to solve more questions in less time. I hope the CAT exam pattern gets normal next year. But this surely helped the candidates in honing their speed and accuracy.

Kshitiz Singhal - I took some test series from Career Launcher and T.I.M.E. as I was instructed to take those. Yes, one can succeed through self-study, but I feel like giving tests is necessary. Since CAT is based on fundamentals.

Careers360 - What are the factors behind your success?

Kshitiz Singhal - Practising the weak areas is one of the most important things. This will help in improving speed and accuracy.

Careers360 - Have you started preparing for GD/PI/WAT?

Kshitiz Singhal - Yes, I have started preparing for CAT 2020 GD/PI/WAT.

Careers360 - Which other MBA entrance exam have you appeared/appearing for?

Careers360 - What is your dream B-School? After that, what career do you want to pursue?

Kshitiz Singhal - They are diverse. I do standup comedy, and I like to explore all the opportunities. IIT Bombay helped me in that. I like music, dancing, I am learning to play guitar, flute, and piano. In IIT Bombay, we used to paint the road. And I have been a teaching assistant for the first-year students of the biology course.

Kshitiz Singhal - I am a night owl, so in the day time, I used to go out on walks and listen to calming music.

Careers360 - Do you have any idol who you follow?

Kshitiz Singhal - Elon Musk is my idol because he says things that seem impossible to achieve, but still, he does it.

Kshitiz Singhal - I would like to tell the aspirants to practice regularly. It is not important to practice for 10 hours a day, but being regular is important. Also, it is important to give as many tests as possible and stay calm. It will help in giving the exam without any haste.

CAT Exam Pattern 2021- Know all the details about the CAT exa...

IIM Fees for MBA and Seats - Know the fee structure of all IIM...

can i give CAT after bsc nursing?

Indian Institute of Management (IIM) will conduct the Common Admission Test (CAT) in an online computer-based mode. The IIM conducting body will begin CAT Registration 2021 from the first week of August 2021.


So, Yes you can apply for CET after completing your BSc Nursing .

Am i eligible for cat exam if i have been failed in class 11?

To be eligible for CAT Candidates must have scored 50 Percent in graduation. Final year students are also eligible to apply. Now coming to your question, if you have passed your 12th then only you can get Admission into Graduation. And only after the completion of Graduation you can appear for CAT or must have reached in the final year of graduation.

Now, if you have failed class 11th, don't worry, you will get easily promoted in 12th. Even if you repeat class 11 and pass class 12th after one year then also it's not a problem at all. Pass your 12th to get admission into Graduation and reach atleast in the final year of graduation to be eligible for CAT. I hope you have understood.

To know more about CAT, Syllabus, eligibility criteria, please go through this link

Here is the steps to apply for CAT 2021 application

4. After entering all the details click on “Generate OTP” button. Using the OTP which is sent to the candidate's registered mail id, complete the CAT 2021 registration process.

5. Go to the dashboard and fill the CAT Exam Application Form 2021.

6. You need choose the IIM Programs & Interview Cities for CAT 2021

If it's expired I will suggest you to get it updated from your nearest block office  as soon as possible in order to avoid any kind of problem in the end or at the time of form filling.

Got 97.95 Percentile in Jee mains 2021 under Obc Ncl Male Cat of Andhra Pradesh what Will be my rank in Obc Ncl

With above rank, you have  chances in NITs  . For example,  you have chances in following NITs

For previous year cut offs of top colleges like NITs, IIITs, GFTIs , you can refer our page at :-

Or alternately you can visit official website of josaa at

Above prediction of colleges is on the basis of past year data but  cut off/closing rank for colleges keeps changing every year depending upon many factors like number of students that appeared in the examination, difficulty level of the JEE main question paper for different shifts etc so

To have a personalised report on your chances of getting a college you can go through our college predictor, it will give you complete list of colleges which you can get on the basis of the category you belong to,  your home state, your gender etc, the link for  jee main college predictor is provided below

If you have any other doubt then you can always reach us to clear them :) we are always available to help you out and guide you