CAT 2019 Topper Interview - IIM Kozhikode has declared CAT 2019 result on January 4, 2020. The difficulty level and status of the paper can be determined by the fact that it is conducted by the IIMs and most of the top Bschools in India accepts CAT score for their admission. To achieve a decent percentile in the paper one have to prepare months prior to the commencement of the examination and securing a 99+ percentile not only requires hard work but also in the proper direction. Sukumar Chowdary final year B.Tech Civil Engineering, NIT Trichy has achieved this goal. Let us see what he has to say regarding his preparation for CAT. Read the full interview to know his journey and how he achieved a milestone 99.03 percentile get without joining any regular coaching classes.
Latest: Know all Details about CAT Result 2019. Also, Check CAT Toppers 2019 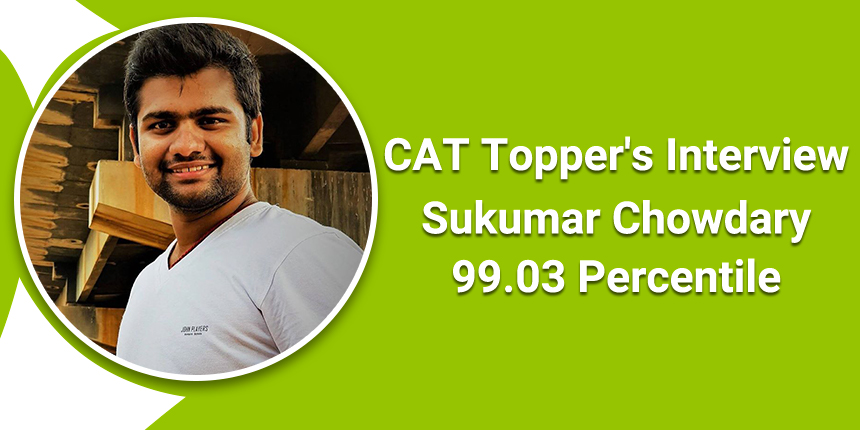 Careers360: What are your overall and sectional percentile and scaled scores in CAT 2019?

Careers360: Tell us something about your background

Sukumar: I am from Nellore, Andhra Pradesh. Currently I am in final year B.Tech Civil Engineering, NIT Trichy.

Sukumar: I appeared for the exam with a pleasant mind and without any expectations and gave my best. As I attempted mocks for CAT with various difficulty levels, I could contain the element of surprise by VARC difficulty level.

Sukumar: Honestly, my idea was to have some work experience to improve my skills and chances of getting into Top tier B-Schools, as I secured placement in a company I wanted to work in. So, I planned to use this year to get some calls and have some Interview experience so that I would know the areas where I have to work on. My preparation strategy was, I took TIME test series and came to know which questions I can do and which questions I should leave rather than preparing for the content because time available for my preparation was limited.

Sukumar: I felt, VARC was the toughest and DILR the easiest. ( Slot-1 ).

Sukumar: As I am strong in DILR. I managed to maintain a bench mark in that section during my mocks while improving other sections. I am weak in VARC, so I tried to improve by doing sectional tests and reading articles online.

Sukumar: I think Time management combined with my knowledge on my strong and weak areas benefited me to get 99+ which I never expected. I managed to schedule the preparation time along with placement preparation. During the exam, I found 2 sections in DILR time taking and chose not to attempt them. Coming to QA, I knew which questions I would solve in 60 minutes and attempted only 20 questions.

Careers360: Have you joined any coaching?How helpful it was for you? Is it possible to succeed through self-study?

Sukumar: I had not joined in any coaching but I took TIME test series and also did previous CAT papers. I think self study is sufficient when one has a clear picture of his/her schedule. That being said, I think a good coaching will definitely improve one's chances provided he/she maintains the self study along with it.

Sukumar: I have started my preparation last month and reading newspapers regularly.

Sukumar: I appeared for CAT only.

Sukumar: Though I won't be in a position to choose among top B-Schools, I would like to join FMS Delhi or IIM Calcutta in coming years, if not this year. I want to have a career in Finance.

Sukumar: I am a Movie Geek. Also I watch and play Cricket, Chess.

Sukumar: Every time I write a mock, I used to watch a movie after that and later work on solutions.

Sukumar: No Idols as of now.

Sukumar: Start the preparation now itself so that you can allot comparatively less time per day in your time of convenience so that the preparation will be efficient. Improve in weak areas and know what not to attempt in the exam.