CAT 2019 Topper Interview: In life, there are instances when hard work accompanied by pleasant surprise comes like an icing on the cake. Similar is the case with CAT 2019 topper Rahul Manglik, who scored 99.9 percentile in CAT. Apart from his dream to make his way to a reputed MBA institute, he is not just confined to books and has Interested in varied sports like skating, basketball, table tennis, and elocution. In a candid conversation with Careers360, CAT 2019 topper Rahul Manglik shares his preparation tips, how his sister guided him and some valuable tips for future aspirants as they aim to take CAT.
Latest: Check CAT 2019 Result Here. Also, know CAT toppers 2019 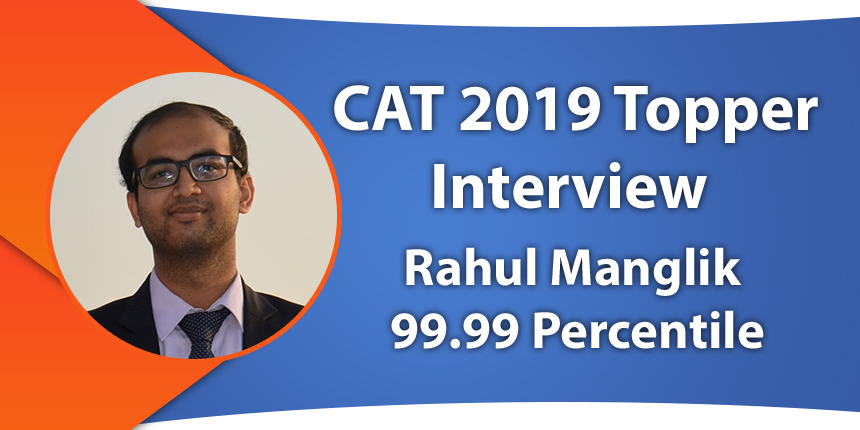 Careers360: Congratulations on securing over 99 percentile in CAT 2019! What was your reaction? Were you expecting this?

Rahul Manglik: I expected a good percentile after calculating my score. But 99.99 is a pleasant surprise.

Careers360: Tell us something about your background

Rahul Manglik: I was born and brought up in Delhi. My father is in a senior position with finance major Motilal Oswal Group and my mother is a chemistry teacher in Ahlcon Public School, Delhi. My sister has done her MBA from IIM Ahmedabad

Rahul Manglik: I focused first on finishing my syllabus to ensure accuracy, then I focused on becoming faster at solving the questions. Solving CAT mock tests was a major part of it

Rahul Manglik: All sections were a challenge in their own way. In VA I had to focus on accuracy and in Quant, I focused on time management.

Rahul Manglik: Initially I used to take a lot of time in solving reading comprehension questions. Then I started reading the questions first before reading the paragraph in depth. This helped me increase speed and accuracy in RC

Careers360: How helpful was your coaching institute for you? Is it possible to succeed through self-study?

Rahul Manglik: Regularly taking mocks and analysing them helped me score better and sped up.

Rahul Manglik: I have joined Career Launcher PDP personalised to prepare for interviews. I'm also making sure to give a lot of mock interviews to prepare myself better.

Rahul Manglik: I am taking the XAT

Rahul Manglik: I have applied for top IIMs and XLRI, based on MBA college rankings and feedback from my sister's friends who are alums of these colleges.

Rahul Manglik: Since school, I've been interested and active in basketball, skating, table tennis, debates, and elocution. Currently, I am a senior member of IIT Bombay’s Racing team which makes electric race cars to compete internationally. I've participated in the Formula Student in Silverstone, UK as part of this team. This year, I'm preparing the business plan and finances of our racing team for this competition.

Rahul Manglik: Spending time with my friends is the best way to relax for me.

Rahul Manglik: Play your strengths and work on your weaknesses. Regular practice and a lot of mocks can help achieve your goals