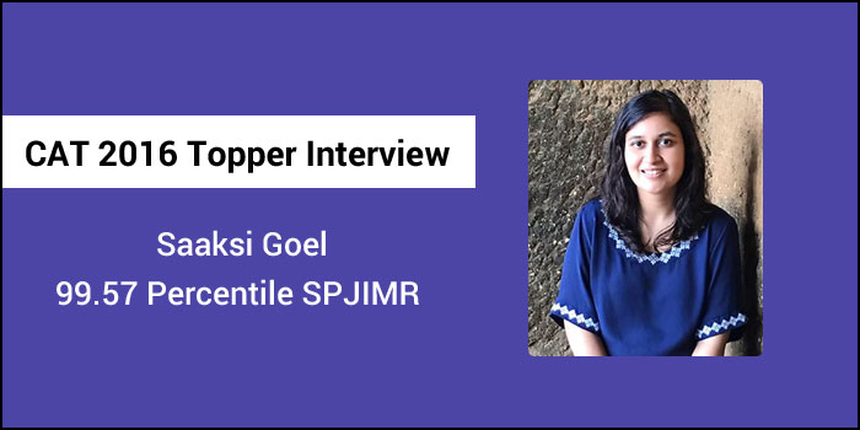 Saakshi Goel, first year PGDM student at SPJIMR Mumbai, hails from a commerce background, nevertheless that did not impede her from obtaining a glorious percentile in CAT. A Chartered Accountant by profession, her journey to success comprised various elements: crash course, regular practice and time management among others. Saakshi's preparation strategy commenced three months before taking the national level entrance exam. During her three months preparation journey, she took around 25 mock test and took note of areas which she was not able to tackle well. Saakshi worked on her weak area such as the QA section by understanding its concepts and devoting more time.

In an interview with Careers360, Saakshi puts forward her CAT 2016 preparation strategy and how prospective applicants preparing for CAT 2017 can learn from her experience.

Careers360: Congratulations on your admissions to SPJIMR. What was your overall and sectional score in CAT 2016? Any other exam you had appeared for, please share the score for the same.

Saakshi: Thank you for your wishes. My overall CAT score was 99.57 percentile with sectional percentiles as follows:

I also appeared for XAT and secured a score of 97.23 percentile.

Careers360: Which was the most challenging and easiest section in CAT according to you?

Saakshi: The easiest section for me in CAT 2016 was VARC. It was manageable to answer all the questions within the given time limit. The toughest was Quantitative Ability (this is the general opinion of almost all students from a commerce background). However, even DI & LR was extremely challenging.

Careers360: Please share your preparation journey. How did you strike a balance between your professional life and preparation for CAT?

Saakshi: I took time off from work for three months, joined a crash course and prepared for CAT. For me, QA was a challenge since I knew I had to compete with Engineers who are well versed with the subject. Hence, I dedicated 75 per cent of my time to QA and the rest of the time was devoted to practicing VARC and DILR. Since I had just three months, I studied full time.

Saakshi: Yes, I joined a crash course with T.I.M.E. In my opinion, coaching classes give students a direction to solve the paper. It is definitely not a prerequisite to bag the top rank. This completely depends on the individual and how proficient and well versed he/she is in these subject areas.

Saakshi: For VARC, solving one comprehensive passage per day was a real bonus. This gave me an idea about how to extract information and inferences from such texts.

DI and LR also required regular practice. The main problem in LR is how to approach a problem. Doing a wide variety of questions helped me get a head start in the exam since I could create an outline approach for every question. Practice is the key in this section.

While in the QA section, I focused on understanding concepts rather than tricks to solve the questions. Solving even half the amount of questions (correctly) in QA can lead to a fairly good score (The amount of time is also such that not all the questions can be solved). So, I focused on the topics which were my strengths and did not give much time to those that I was struggling with.

Saakshi: Mock tests played a huge role. I took about 25 mock tests after I finished my course. One test per day. These tests familiarised me to the CAT pattern and helped me identify problem areas.

Careers360: How did you get the mock tests analysed and modified your strategy after that?

Saakshi: I did not specifically get mock tests analysed. I just identified my problem areas while I took the tests and worked on those. I identified the areas I was strong in and solved those questions first in the final paper.

Above all, mock tests helped me in planning the allocation of time for each type of question.

Saakshi: Calculator was barely used as it’s a mouse operated calculator and consumes a lot of time.

Non-MCQs carry no negative marking but are very lengthy. So I left these questions for the end.

Careers360: What is your suggestion for CAT 2017 aspirants?

Saakshi: There are a number of important things I learnt from the entire process. Some I implemented and some I wished I had. The most important thing is time management, both during preparations and during the exam. It’s a game of how one performs best in a limited time. Second is playing on your strengths. Apart from all this, try not to get worked up. Remain focused and be calm.

Stay tuned to bschool.careers360.com for more information on CAT 2016 toppers

when wiil be Mat xam conducted

The next MAT will be conducted in the month of May.

MAT is conducted four times a year namely February, May, September, December.
Eligibility is passed graduation in any discipline from a recognized university, even final year students are eligible.
As of now , no official dates have been announced regarding the exam or any other details related to it. You can stay updated at the official website at https://www.aima.in/index.html
Read More
Answer
Answer Later
Report
7 Views

which books are good for CAT exam

In CAT Exam the questions are of a decent level so I recommend you to study from standard books.

These are some of the standard books for preparation of CAT Exam:-

You may refer to this article for more information about Best Books for CAT Preparation.

which are the best private colleges for intrigated MBA (BBA+MBA) ???

Whats the CAT cutoff for MBA in DSM, DTU?

DSM, DTU for MBA takes only CAT scores. The safe CAT percentile for all the courses is 65 percentile. Although different courses have different cut offs.

Its a below average college. (íts not recommended to join this, but if you don't have any options left then go)

For more details visit the below link:

what are the benefits for CATS

Hi Chung!! Hope you are doing well!! CAT is one of the most important exams of our country. CAT was initially started by Indian institute of Management. It is a computer based test. The benefits of giving CATs and cracking it are that you will be eligible to take admission for a graduate management program in colleges across the country. CAT score is considered by a large amount of management Colleges of our country and many students try their best to crack it as it gives them a chance to move towards their management learning goal.