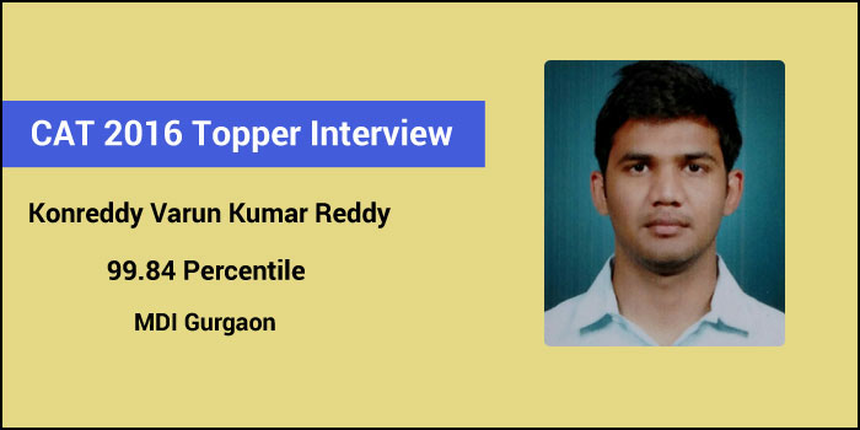 Konreddy Varun, a first year student of MDI Gurgaon, attributes his CAT result to a persistent preparation strategy and a 'never give up' attitude. A BITS Pilani graduate with a degree in BE Manufacturing Engineering, Konreddy had already tried his hand at a couple of startups, following which he decided to pursue MBA and appeared for CAT, securing 99.84 percentile in the process. He began his preparation four months prior to taking CAT 2016. The first two months were dedicated to solving three sectional tests of 30 minutes duration each every day, while the other two months were dedicated to writing full length mock tests every week. The fact that Konreddy did not join any coaching institute and still bagged a high percentile is a success story in itself.

Careers360: Congratulations on your admission to MDI. What was your overall and sectional score in CAT 2016? Were there any other exams you had appeared for? If yes, please share the score for the same.

Konreddy: Thank you so much. I had only appeared for CAT. The following are my sectional scores and percentiles in CAT 2016.

Careers360: Talking of sections, which were the most challenging and easiest sections in the test for you?

Konreddy: I personally felt that DILR was the trickiest among all the sections this year. I was comfortable with Quant and I felt that QA was the easiest of all. The VA section was of moderate difficulty level this year.

Careers360: Please share more about your preparation journey. How did you strike a balance between your professional life and preparing for an entrance exam?

Careers360: Did you join any coaching institute? Do you think coaching is necessary for aspirants to bag the top rank?

Konreddy: I didn’t join any classroom coaching as such. According to me, coaching is not necessary to bag a top rank but it certainly is useful. Apart from getting your concepts clear by the faculty members, you also tend to meet a lot of individuals who are aiming for a top rank. Having this kind of a peer group around keeps you motivated and fosters a spirit of healthy competition. Also, the instructions of coaching institutes help a lot through the GD-PI rounds.

Konreddy: For the VARC section, I realised that the RC part was my strength and Verbal Reasoning, particularly para-jumbles was my weak area. During the exam I tried to attempt the 24 questions of RC section first. After that I moved on to the Verbal Reasoning part.

Between DI & LR, the latter is my strong area and I attempted it first. For DI, I normally used to do the calculation intensive sets towards the end. However, in this CAT paper, there were hardly any DI sets that were purely calculation intensive. Every set had a lttle bit of both – the logic part and the interpretation part. That is what made this section tricky. What I did was pick a set I thought was easy based on a cursory read, and then attempt questions from it. Don’t try to solve all questions from a particular set. Solve the ones you can and move on to the next set. This strategy helped me score well in this section.

QA was my strength and I didn’t have any strategy as such. One thing I followed was to stick to the two minute rule. If you can’t solve a question within two minutes, move on to the next one. Practicing a lot of questions helps for Quant in the sense that it becomes easy to decide which question is doable and which one is not.

Careers360: How did you tackle the sections and topics which were challenging for you?

Konreddy: I was comfortable with QA and just practiced it from the mocks. I initially faced some problems with VA. My accuracy with RCs used to dwindle a lot. However, with practice, it got stabilised. Para-jumbles remained a weak area till the end and I attempted it last in the exam.

In the DILR section, the toughest part is picking the right set based on a scan of the data given. One wrong choice of set can have an adverse impact on your performance. Even within the sets, if you are not able to solve all the questions, its OK. Move on to the next set.

Konreddy: Materials provided by the coaching institutes usually prove to be sufficient for understanding all the requisite concepts. After that, solving sectional tests help. Since these are time-bound, they go a long way in improv\ing your speed. Also, with the sectional tests, you can experiment with different strategies, something that people are apprehensive of doing in a full-fledged mock.

Careers360: What is the significance of mock tests in your success? When did you start taking mock tests and what was the frequency?

Konreddy: Mocks help you in identifying your weak and strong areas, which in turn help in devising a strategy that suits you. Apart from exposing you to a wide array of questions, mocks also help you in improving your strategy and test-taking mentality.

I started taking mocks two months before CAT. I used to take two mocks a week and analyse them thoroughly. If there was a certain area of weakness, I used to work on it before attempting the next mock. I personally feel that giving 20 mocks should suffice.

Konreddy: I used to go through the solution of each and every question irrespective of whether I answered them correctly or not. It exposes you to different ways of approaching the same question. I used to keep a tab on my accuracy on each topic so that I could invest some time on my weak areas and increase the accuracy going forward.

Careers360: What was your time management strategy for section-wise preparation vis-à-vis exam day?

In the case of QA, I made sure that I do not lose marks on the easy questions and don't waste time on the difficult questions.

Careers360: How did you utilise features like calculator and non-MCQs in CAT?

Konreddy: Calculator use varies from person to person. I personally feel using the onscreen calculator consumes a lot of time. In CAT 2016, there was no set that required a lot of calculation. As for the non-MCQs, since there is no negative marking, even if you can’t attempt do try to solve them.

Careers360: Any other tips or suggestions that you would like to share with aspirants?
Konreddy: CAT is not as difficult as it is made out to be. Prepare a time-table that suits your work timings/academic rigor and religiously follow it. Be motivated and consistent throughout the preparation. Do not let your mock scores have an influence over your preparation. Mocks are only to practice a variety of problems and to devise a strategy for the final exam. Remember the fact that the paper is the same for everyone and do not panic in the exam. Have mock interviews before the actual ones and improve yourself based on the feedback.

Stay tuned to bschool.careers360.com for more information on CAT 2016 toppers

VGSOM IIT Kharagpur requires a minimum of 90 percentile in CAT and it only considers the overall percentile and not the sectional ones. So it may be a little difficult to get a call from there. But since you've a pretty decent CAT percentile so you can still get some very good colleges like

All of them are good in terms of academics and placements with strong alumni base. So you must try to appear for their GD/PI processes, given that you've registered for them.

Moreover among these colleges also BIM Trichy, BIMTECH Noida and LBSIM Delhi will offer you placement opportunities as good as IIT Kharagpur with an average compensation package of 10-12 lakhs.

should i start cat preperation in my 1st year ,of bba

Yes you can start, it is upto you if you can complete it in 1 year then you can start during the final year of your Bachelors. But if you want to start now you can start and it is a good option. By preparing from 1st year you will have good advantage to get good percentile and admission in good colleges.
Read More
Answer
Answer Later
Report
9 Views

With your scores, it is quite probable that you. An seek admission into IMI, Delhi for pursuing PDGHRM considering the fact that the cut-off CAT score for admission is expected to be around 80-85%

Hope this helps you. Careers360 wishes you the best for your future endeavours!

Your plans are great and its really appreciable that you are ready so early.
Now if we talk about your 1st plan then here the most important thing is that you will have to get good marks in your boards to get selected in a good college in DU.
You said you want to do CA and prepare for CAT after graduation.This is where you will get stuck.See,CA itself is very time consuming and one of the toughest exams in india and you need special preparation for it.And on the other hand you said you want to prepare for CAT too which is also a tough exam.My opinion for you is that you should choose any one. If you are interested in management then simply take admission in B.Com and start preparing for CAT and if you are interested in Accounting then prepare only for CA after taking admission in B.Com.

Your 2nd option is good because you are keeping a backup with you so if you will fail in the entrance of DU JAT then you can go for CA but make sure you take admission in B.Com.

You will have to choose one between CA and CAT.
You can do MBA after CA so i would say if you are really interested in management then go for CAT.
If you will aim for both at the same time then you might end up messing both.

Sorry to disappoint you, it is quite difficult to get into the top IIMs. Students generally get the call when there score is above 96 in particular for IIM-ABC. 96 might be less as well.

But don't get disappointed, with 84 percentile you can still apply for the other top institutions of India. Or else, you can sit for the entrance exams of other institutions like FMS delhi, NMIMS etc.