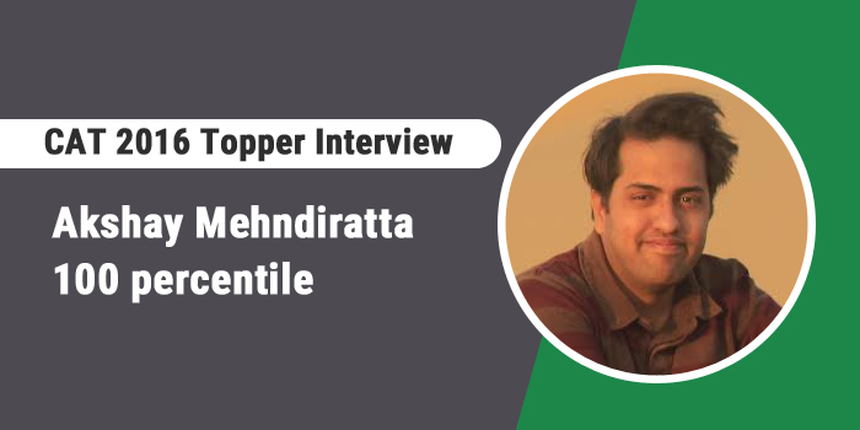 A chemical engineer from IIT Delhi, Akshay devoted his weekends to clearing his concepts as well as taking mock tests. He now aspires to get through IIM Ahmedabad to pursue his MBA in Finance.

Read the excerpts of the interview:

Careers 360: Congratulations! How are you celebrating? Were you expecting this score?

Akshay: Thank you! It is indeed an achievement, but still, there is a long way to go before I can reap the rewards of my results. Currently, my focus is to clear the WAT and PI rounds. I do have a big celebration scheduled for the weekend. I was expecting a good percentile, somewhere in the range of 99.7 and more, but getting the perfect percentile was like a golden moment for me.

Careers 360: What is your sectional and overall percentile?

Careers 360: How was your exam taking experience? Which were the toughest and weakest sections according to you?

Akshay: My initial thoughts were that the test did not go as per my expectations since I considered Quantitative Ability as my biggest strength and I had missed quite a lot of questions. This was not the case while I was taking the mock tests. After going through the reviews of the exam, I realised that I had done fairly well. Verbal Ability was the easiest of all the sections.

Careers 360: How did you prepare for CAT? Did you opt for mock tests? How much time did you give for your preparation?

Akshay: Since I am working, I used to get time to prepare only during weekends. I used to work on the Verbal Ability section and other weak areas on Saturday. On Sundays, I used to take mock tests and analyse it comprehensively. I followed this routine from June onwards.

Careers 360: Which is your preferred IIM? Which specialisation are you interested in?

Akshay:  I aspire to get admission in IIM Ahmedabad. Though it is too early to say anything, but fingers crossed. I would like to have a specialisation in Finance.

Careers 360: How is your preparation for the next rounds of admission?

Akshay: For the future rounds, I have enrolled with some of the coaching institutes. There are still two months left for the interview process to commence. I have a fair idea about the process from my classes. Let’s see how it works out.

Careers 360: Were you active on social websites during your preparation?

Akshay: I was quite active on the social media platforms as it helped me to de-stress. I was active on Facebook, Instagram and WhatsApp.

Careers 360: What are the tips that you would like to give those who plan to take up CAT the coming year?

Akshay: It is important to identify your weak areas as early as possible and start working on it. In the initial days of preparation use some good materials. Once you start taking the mock exams and test series, then there should be improvement. Take as many mock tests as possible as it will help in maintaining consistency, devising correct strategy and improving accuracy.

is there any scholorship available for cat top scrores

GITAM Hyderabad Business School has no scholarship facilities for students who have been toppers. CAT is not only the entrance exam that is accepted in this college so CAT toppers or any exam toppers for MBA entrance exam do not get any scholarships. But Gitam College, Visakhapatnam offers merit scholarships and you can check them at: https://gim.gitam.edu/admissions/merit-scholarship