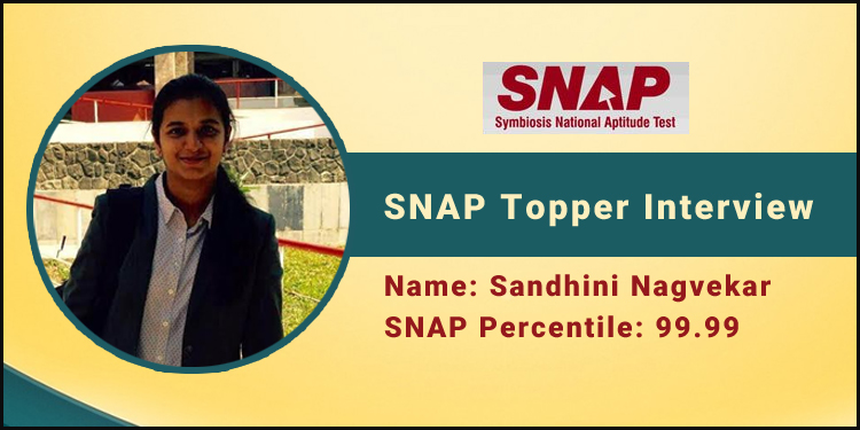 Sandhini Nagvekar, SIBM Pune student shares how she prepared for SNAP while having a full-time job. For Sandhini, the key was to maximise speed and minimise errors. She was quick to identify the weak areas and work on them.

In this interview with Careers360, Sandhini, an alumnus of NMIMS University also shares why she chose to join SIBM Pune and the specific preparation strategy she followed for SNAP. According to her, before appearing for the paper you must have a proper strategy in place so that you can focus on the exam itself rather than spending time on which section to start with and how much time to spend on a question.

Careers360: How was your experience of taking SNAP?

Sandhini: For an institute like SIBM Pune I expected to face intense competition and hence I knew I had to prepare and channelise all my energy in the right direction. In my opinion with such a huge amount of expectations and aspirations weighing on my shoulders I needed to maintain my composure so that I could perform to the best of my abilities on the test day. In the hours leading upto SNAP I focused all my energy towards staying calm and delivering my best during the test.

All in all the overall experience of taking SNAP was thrilling and exciting. A smooth process starting from registration to the D-Day of taking the exam, everything was very well organised and systematic.

Careers360: Why did you choose Symbiosis over other B-schools?

Sandhini: SIBM Pune not only looks at scholastically oriented candidates; it also values well-rounded individuals with confidence and the ability to think on their feet, thus SIBM.

Careers360: Since when you started preparing for SNAP.

Sandhini: My test preparation strategy involved starting with individual chapters and having a clear understanding of the pattern. Moving ahead, I practice and took several Mock SNAP Tests. Later, and most importantly, speed maximisation and error minimization was my aim. Accuracy was initially an issue I faced, but with practice and better understanding of the paper I got habituated with a style of solving the mock papers.

Careers360: What is your take on SNAP test pattern? Do you think the mode should change from the traditional paper pencil based test?

Sandhini: Granted that in a paper and pencil test, it tends to get more time consuming as you need to darken the circles instead of just clicking on the right option, but to me it was a far better option, as I am more of a pen-and-paper person. Symbiosis has continued administering its test offline since the test efficiently gauges the actual acumen of the student. Personally, I can read and solve better when the questions are in front of me on paper and not on the screen. I can calculate faster and make notes right next to the questions, which worked in my favour and helped me compensate and overcome the time factor. It’s more flexible towards various kind of test taking strategies that students might want to implement and SNAP gives them the liberty to do so, as candidates can hop-skip-jump sections according to their preference.

Sandhini: For an exam as competitive as SNAP, I wanted to discover the best strategy for the individual sections. For Quants my strategy was to maximise speed and minimise errors this involved constant practice. Since Logic and Verbal was my strong suit I planned to attempt them first and capitalise on it.

I attempted the Data Interpretation and General Awareness later, and since I had worked hard over the last few months in keeping myself updated on the current events, I fared well in the General Awareness Section which was a game changer for me.

Careers360: How did you manage your time during the test? What were your strong and weak areas? How did you tackle your weak area of the test?

Sandhini: Logic being my forte, I started the paper with it followed by Verbal, Quant and GK being the last. I always start with my strength, as it gives my morale a boost while attempting the paper. Although GK section hardly takes time, but not knowing an answer affects me adversely and tends to have a domino effect on my overall performance.

Playing to my strengths was the strategy I adopted and the mock SNAP tests that I took helped me keep a track of time, which is vital for cracking SNAP, and eventually, that strategy did wonders for me.

Giving up was not an option and since a spot at SIBM Pune was what I was striving for, slowly and steadily with more and more practice and taking mock tests, I became familiar with the kind of sums that were asked and prepared accordingly.

Hence, understanding the SNAP paper was something I invested my time in. For instance, the Logic Section carries a lot of weight-age, so I strategised and built upon that section.

Careers360: Your message/tip for this year’s SNAP aspirants?

Sandhini: Clarity of thought along with ability to express is appreciated and that is all SIBM looks for. Content and Confidence are a must-have for facing the GD rounds for which reading and staying updated is necessary. Practice as many mock papers you can, with time limit. Stay focused and do not over exert yourself.

Stay tuned to bschool.careers360.com for more news and updates on SNAP 2016.

SNAP Selection Procedure 2020 - The exam authority will start the SNAP 2020 selection procedure a...

Hi, I have 95.8 for SNAP. Will I get a call from SCMHRD for business analytics and how should I prepare for its computer exam.

these are the colleges, from which you would get a call on the basis of your SNAP percentile.

My SNAP score is 59.75 and Percentile is 74.62. What are my chances? I wish to get into SIIB Blore. Will I get in? Also, is the percentile too low according to the score this year?

Aashvi, some colleges that accept a score of 74.62 percentile have been listed here:

Also please note that you can get a call from any of these institutions only if you had applied for it during the registration period.