CAT 2019 Topper Interview - The suspense over the declaration of CAT result is over as IIM Kozikhode announced it in online mode in the first half on January 4. With the announcement of the result, some of them scaled a perfect 100 percentile with sheer hard work and maintaining consistency during the course of the preparation. CAT 2019 topper Rahul Gupta, scored 100 percentile and his aim is to make his way to IIM Ahmedabad or IIM Bangalore. An ardent reader of fiction novels, CAT 2019 topper Rahul Gupta emphasised on learning from one’s mistakes while preparing for the exam. He also stressed on starting the prepration for CAT early and not leaving anything for the fag end. In order to destress himself, he used to listen to music and go for a walk and then used to get back to his preparation, much more rejuvenated. CAT 2019 topper Rahul Gupta spoke exclusively to Careers360 and shared his experience about the exam and how he prepared for the exam.
Latest: Know all Details about CAT Result 2019. Also Check CAT Toppers 2019 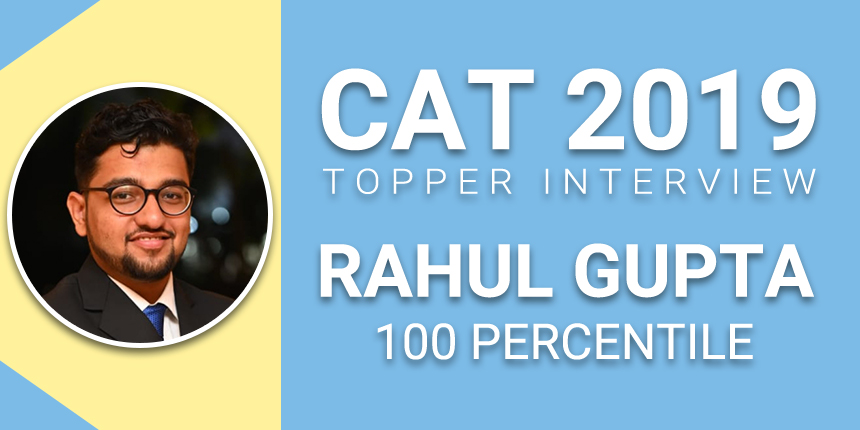 Careers360: Congratulations on securing over 100 percentile in CAT 2019! What was your reaction? Were you expecting this?

Rahul Gupta: My overall percentile is 100 and the overall scaled score is 238. 95 in CAT 2019. In Verbal Ability and Reading Comprehension (VARC) section I have scored 99.91 percentile, in data interpretation and logical reasoning I have got 99.95 and in quantitative ability I have got 99.97

Careers360: Tell us something about your background.

Rahul Gupta: My test centre was at least thirty to forty kilometres away. However, on the day of the exam I reached on time. At the CAT test centre, everything was very systematic and I did not face any problem. As far as the exam was concerned, I found the English section slightly difficult as compared to data interpretation and logical reasoning and quantitative ability one.

English - As far as my preparation for reading comprehension and verbal ability is concerned, I used to read a lot of fiction novels as well as newspaper. In order to ensure that I could answer the questions with ease, again I used to practice CAT mock test.

Quantitative Ability - I studied the basic theory,number systems, arithmetic. Two months before the exam I used to regularly take mock test and used to devote at least four to five hours. I practised a lot of questions on Geometry so that I am able to solve it with ease as solving more questions gave me confidence to respond correctly on the day of the exam.

DI and LR - I used to practice a lot of questions from particular topics and also focussed a lot on them while taking the mock test.

Rahul Gupta: I found the English section tough as compared to last year. It was not easy to answer the questions after reading the passage at one go. Meanwhile quantitative ability was easy. Data interpretation and logical reasoning questions were tricky, though I found them easy as compared to what I used to answer in the mock tests.

Rahul Gupta: Before the exam, somehow I was not able to score very well in the quantitative ability section and I used to be not satisfied with my performance. I practised a lot of mock tests and gradually I started doing well.

With regards to English, I used to think logically and then answer the questions. I used to analyse my mistakes and ensure that I do not repeat it.

My performance gradually improved in the data interpretation and logical reasoning section. I practised a lot from sectional and mock tests and the questions that were there in the study material from which I was preparing.

During the exam, with regards to the English section, I went with the flow. First I answered three passages out of the six and then moved to the verbal ability section. First I solved those questions which were easy and about which I was confident. Later on I moved to other questions which I found slightly puzzling.

Logical Reasoning and Data Interpretation - I scaled through the questions and first answered those about which I was 100 per cent sure. Then those that were moderately difficulty ones and last the doable ones.

Quantitative Ability - This section I found easy and I was able to answer the questions in sequence.

Careers360: How helpful was your coaching institute for you? Is it possible to succeed through self-study?

Rahul Gupta: I took coaching from T.I.M.E. As performance was good in mock test, I got an opportunity to meet the head of the institute at Chennai and he gave me feedback which was very useful for me. As far as self-study is concerned, one needs to have a proper study material for the same and one has to maintain consistency while covering the syllabus. A test series from a good coaching institute will prove beneficial along with the CAT mock tests.

Rahul Gupta: I think I was very disciplined while giving the CAT mock tests and I used to quickly learn after analysing my mistakes. This is one of the most important factors for my success.

Rahul Gupta: I have not started preparing on a very serious note but I am going through various topics.

Rahul Gupta: I am not appearing for any other exam except XAT.

Rahul Gupta: As such there is no particular institute in mind, but I would like to make my way either to IIM Ahmedabad or IIM Bangalore. I want to do MBA in finance as it always fascinated me even during the time when I was pursuing my engineering.

Rahul Gupta: I like to play badminton and read fictional novels and at other times, I used to watch television.

Rahul Gupta: If i used to get stuck and feel a bit stressed while preparing for the exam, I used to listen to music or go for a walk. I used to not force myself.

Rahul: Not particularly, but as far as academics are concerned I used look upto my father as he was very particular about my education from the very beginning.

Rahul Gupta: My message to the future aspirants is start your preparation early and do not wait till the last stage. Most importantly, what will make you get an edge over others is consistency. You must take your preparation seriously, quickly identify your mistakes and also take the mock tests on a regular basis.