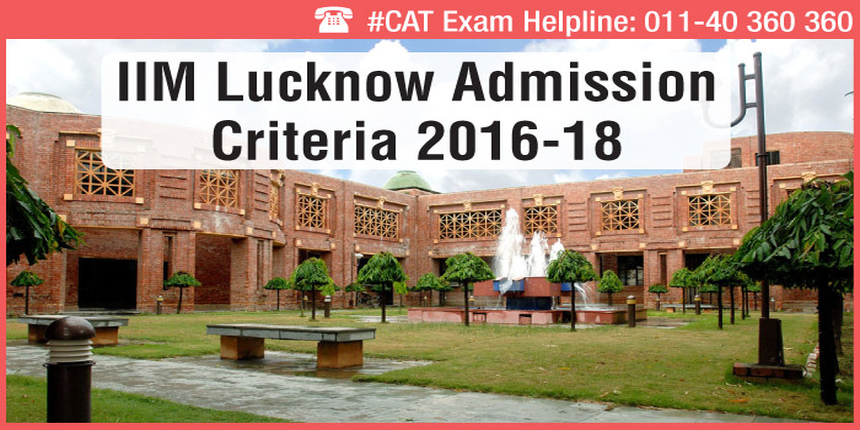 IIM Lucknow has declared the admission criteria for the PGP batch of 2016. There will be a 2 step process for shortlisting and selecting the students. According to the IIM Lucknow admission criteria, this year the Group Discussion (GD) round will not be held. The shortlisted candidates will have to appear for Written Ability Test (WAT) and Personal Interview (PI) rounds. Till last year, the institute conducted, GD, WAT and PI rounds.

Let us have a look at the shortlist and selection procedure for the PGP, PGP ABM and PGP SM at IIM Lucknow.

The following table brings to you the CAT 2015 cutoffs.

After shortlisting the candidates on the basis of the cutoff, a merit list will be generated based on the weights and factors given in the following table.

Unlike last year, Class X scores are not considered for preparing the merit list of shortlisted candidates. Instead, the Class XII weight has been doubled compared to that of last year. The weight of the Diversity factor under the PGP ABM programme has been increased from 5 to 13.

The following weights will be assigned to be various components during the WAT-PI rounds.

Candidates participating in WAT-PI rounds should obtain minimum score of 12 out of 40 in PI rounds in order to pass.

IIM Lucknow Admission Criteria 2020-22: IIM Lucknow has announced the admission criteria for the ...

If you're planning to appear for CAT in 2020 then you still have some time. Try to work on your profile like participating in national events or doing certain internships as that will increase your chances of getting a call and will also help in further career expansion.

You've a pretty good chance of getting IIM Calcutta considering your CAT percentile and your academic background. The final selection process of IIM C is a little easier than that of IIM L which focuses more on the knowledge  of general business .

Moreover IIM C usually considers  the diversity and provides good platform to ews,sc or st students . So you definitely have good chances. So just give your best in the interview and you can easily get through it.

Do the new and baby IIMs provide dual specialization? What is the criteria? Please explain.

They provide dual degree program to some selected students. For IIM calcutta:- the process is selection through CAT/GMAT score. Then going through other screening tests. If you qualify then  you will get an admission. The process will be same for all the IIMs but may be the cutoff mark will vary with respect to campus location.

New IIMs are worth joining as said by the students who joined and they had a good experience there and they adventured many new things. Fee structure and hostel facilities are also good.

Can I directly take admission in IIM Lucknow without appearing in any of the competitive exams like CAT MAT etc.

hope you are doing great

If you are thinking that you are going to get admission in any of the IIM without going for the entrance exam then I must say that you are totally mistaken dear because there is no such rule by which you can admission directly into an IIM.

The Best and only way to get into an IIM is to go by clearing the exam of CAT like the rest of the students are doing in their career.

Eligibility criteria for CAT is as follows :-1. Graduation from a recognized university 2. Percentage :- 50% or more 3. No Subject Bar 4. No Age Bar

View All Questions
Have a question related to IIM Lucknow ?

Your IIM Lucknow brochure has been successfully mailed to your registered email id .