CAT 2017 Topper Interview: Practicing as much as you can is an imperative and crucial to success in CAT, says FMS Delhi student Saswat Gupta

CAT 2017 Topper Interview - As the clock ticks and CAT 2018 draws nearer, MBA aspirants are constantly seeking inspiration for how to crack CAT 2018 in 4 months. This interview of CAT 2017 Topper Saswat Gupta is an exemplary case of acing CAT, when one has a handful of months left in hand.

Saswat’s success of securing 99.91 percentile in CAT 2017, mainly revolved around regular practice and mock tests. “I studied on my own mostly, since I started preparing for the exam 100 days before the day of the exam” he says. Additionally, to aid his preparation, he joined the three-month batch at Career Launcher for topics in which needed more guidance in. Read this CAT 2017 topper interview to know the topper’s success story of CAT preparation strategy including mock tests, its analysis and section-wise preparation strategy. 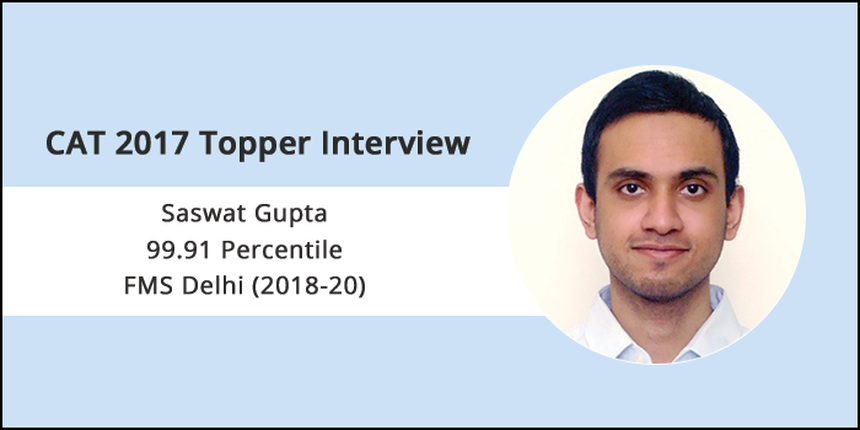 Saswat: My scores are as follows:

I also appeared for the following exams:

Careers360: How did you prepare – Self-study or Coaching?

Saswat: I studied on my own mostly, since I started preparing for the exam 100 days before the day of the exam. I joined the three month batch at Career Launcher and attended quant and verbal classes of the topics for which I needed more guidance.

Careers360: When did you start preparing for CAT? Please share in detail your month-wise preparation strategy for CAT in terms of 3 months, 2 months, 1 month and last minute strategy you followed.

Saswat: I started preparing for the exam in August 2017.

I did not follow a specific time table. However, I spent five to seven hours studying daily.

Careers360: What was the one thing that you did consistently during your preparation?

Saswat: I practiced and studied on a consistent basis. Practicing as much as you can for this exam is an imperative and crucial to success in this examination.

Saswat: I used the following sources:

Careers360: When did you start taking mock test and what was the frequency?

Saswat: I started giving mock tests in the last week of August. During the next 90 days - until the exam in last week of November - I gave around 20 full mock tests and around 50 sectional tests. The frequency initially was once in more than 10 days. However, as time passed by, this frequency became more like sectional to full tests everyday.

Saswat: To prepare for Engligh, I recommend read newspapers, listening to news, and conversing in English.

Saswat: One should keep his/her calm by remembering the obstacles they have previously overcome and take confidence from them.

If one feels that he/she does not have previous inspiring achievement, then they can take satisfaction from mock tests and from the week on week improvement in preparation level.

Saswat: I wish the best of luck to all CAT 2018 aspirants. Give your best and do not take your result to your heart, be it good or bad. There are multiple routes to reach your dreams. Success in this exam is not an indicator of how well or how many dreams you will be able to fulfill.

39 minutes ago
Read More
View All News and Articles