Jessie Lemos was just another CAT aspirant when she started preparing for the biggest exam a year back. Nevertheless, with a formulated preparation, regular practice and faculty’s guidance, she topped CAT 2016 with 99.08 Percentile and grabbed admission in one of the finest management schools in the country- MDI Gurgaon. Jessie, a Electronics and Telecommunication engineer and a fresher by experience, says that taking a lot of mock tests was the single most important factor that aided her CAT preparation. 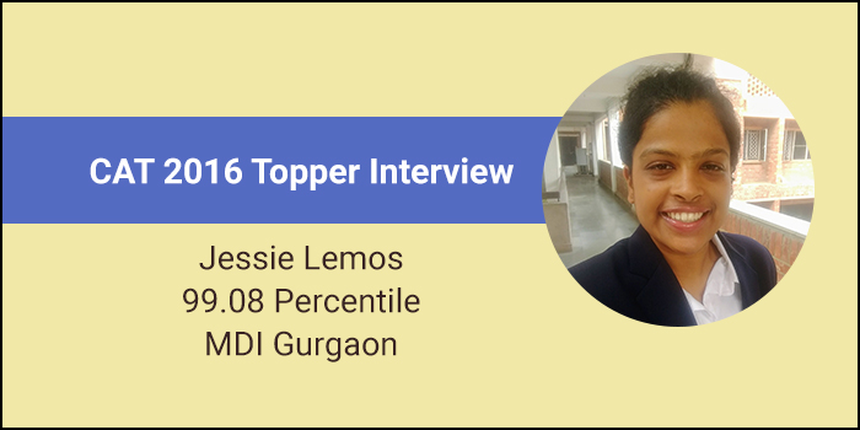 In an interview with Careers360, Jessie tells us how she managed to study engineering and prepare for CAT at the same time. Let’s know more about her preparation experiences which made her excel the exam.

Careers360: Congratulations on your admissions to MDI Gurgaon. What was your overall and sectional score in CAT 2016? Did you appear for any other exam besides CAT? What was the result?

Careers360: Talking of sections, which was the most challenging and easiest section in the test?

Jessie: CAT’16 will always be remembered for its difficult DILR section. Many people could not solve anything. However, for me, Quantitative Ability (QA) was toughest. The easiest section was VARC.

Careers360: Please share your preparation journey. How did you strike a balance between your academic life/professional and preparation for an entrance exam?

Jessie: I started my preparation around the month of October. So, I had more than a year to prepare. However, I did not seriously prepare until April 2016. I really pushed my boundaries during the post-CAT period.  I was an engineering student and it was not easy to manage both college and CAT. My project group mates and my classmates helped me greatly by sharing my workload whenever they could.

Jessie: I was a full-time classroom student with TIME. While being in TIME aided my preparation to a great extent, I do not think that it is imperative for aspirants to join coaching classes. CAT is based on what we have learnt till class 12th and hence, we need not be taught all that again. But, coaching institutes do provide you with a direction to study and help you in disciplining your preparation.

Jessie: VARC: Ever since my childhood, I have had a strong reading habit and hence, I did not have to put much effort into this section. However, those who do not have this habit yet should start reading as much as they can, preferably something in non-fiction. Also, just reading will not help. One must also learn to comprehend what they read. For the verbal ability part, practise is the key.

DILR: I just kept practising a wide variety of sets so that no kind of question could surprise me in the main exam.

QA: This is the section that I had trouble with. I used to practise the questions from the TIME material and then take section wise tests. After every test, I used to ask my peers and teachers to help me with the question that I could not solve.

Jessie: In QA, I had a tough time with topics like Statistics, Probability and Time and Distance. In DILR, the games and tournaments based caselets were too difficult for me. For both these issues, I just kept on practising as many questions as I could. I also used to discuss these with the seniors for a better understanding.

Jessie: The single most important factor that aided my CAT preparation was taking a lot of mock tests. I started taking mock tests in January 2016. Initially, I used to take the mock tests after every 15 days. After that, I moved to a mock test every week. In the last two weeks of preparation, I took only three mock tests. I focussed more on formulating a proper strategy for the same.

Jessie: TIME used to publish a video analysis of every question asked in the mock tests. I used to watch those and come up with a strategy specific to it.

Careers360: What was your time management strategy for section wise preparation vis a vis exam day?

In DILR, I spent the first 5 minutes in going through all the sets and deciding which ones to attempt. After that, I spent 20 minutes on each of the sections and I left the last 15 minutes to think about the questions that I could not solve in the first attempt.

In QA, I allotted a time based on the number of questions. I used to move on to the next one if I could not solve a question and then come back to it later.

Jessie: I used the calculator to solve data based questions in DILR. I attempted all the MCQs even if I did not know the answers as they had no negative marking.

Careers360: What were the topics of WAT and GD at B-schools you had appeared for? Also, mention the PI questions you were asked?

Jessie: Some of the topics that I can recollect are:

Most of my PI questions revolved around academics. I was asked basic questions on electronics and telecommunications. Apart from that, I was asked about why I want to do an MBA and my opinions on the trending topics.

Jessie: My only suggestion would be to take all the mock tests very seriously. I diligently took every mock test and mapped my progress. In the end, the actual CAT felt like just another mock test and hence, I felt no pressure. All the best to all the CAT 2017 aspirants!