Ankit Khandelwal quit his job to pursue his dream of cracking CAT. When he started his preparation for the exam, he scored quite low. But his engineering skills and systematic approach towards preparing for one of the most competitive exams made him a topper in the end. With 98.84 Percentile, Ankit topped CAT 2016 to get admission in MDI, Gurgaon – one of the top B-schools in India. He also scored high in other management entrance examinations including SNAP and IIFT. Ankit says that coaching and guidance from experienced faculties helped him immensely throughout the preparation. 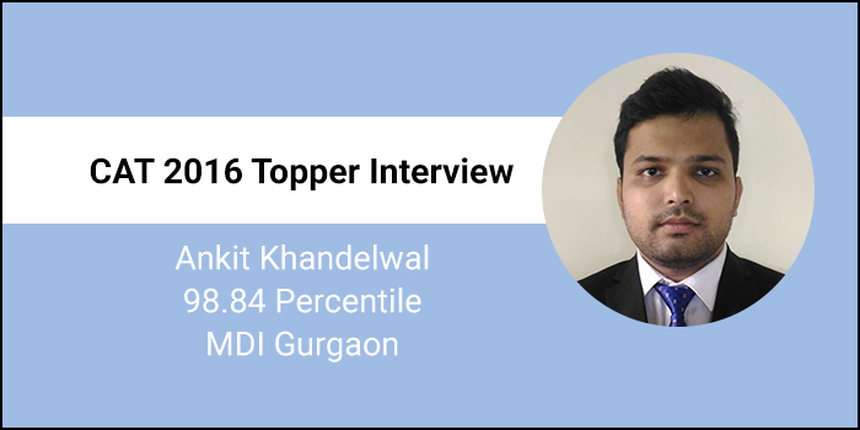 Ankit’s success in CAT shows that no dream is too big if you really have the courage to pursue them. In this interview with Careers360, he shares his journey from scoring low in mock tests to topping CAT 2016.

Careers360: Congratulations on your admission to MDI, Gurgaon. What was your overall and sectional score in CAT 2016? What other exams did you appear for, please share the score for the same.

Ankit: Thank you so much. Here are my scores:

Careers360: What was the most challenging and easiest section in the test?

Ankit: The most challenging section for me was DI, as the sets were bit tricky and time-consuming and selecting the sets was the key point. Being an engineer, I found QA to be on the easier side and managed to score well by selecting questions and prioritising them. CAT has recently reduced the toughness level for QA section to balance the level for non-engineering students. So, it’s easy to score good marks in this section.

Ankit: I started preparing for CAT around August after quitting my job. So, my only focus at that time was CAT. The first thing I did when I started preparing was taking mock tests. I scored just 52 per cent with score as low as 67. This was an eye opener for me. I knew I had to make a strategy for the next six months to get admission in one of the top B-schools. I focused on my strength which was QA and tried to solve as many questions. I also used to give 30-minute mock test for every topic so that I won’t make silly mistakes and can complete the test on time with decent accuracy. I normally studied five to six hours daily and dividing these hours into smaller task, focusing on all sections equally. I used to score around 80 per cent in the starting with VA percentile on the lower side, but analysing the mock test and learning new fundas to solve problems improved my score and in the D-day, I aced it.

Ankit: Yes, I joined Alchemist coaching in Delhi. There, I was guided by one of the best faculties who helped me in realising my weaknesses and strengths especially in Verbal Ability. It helped me improve my mock test scores. So, I believe coaching in today’s scenario is important because you can have a systematic approach towards your preparation.

Ankit: My first score in VA mock test was around 40 Percent. I consulted this with my faculty and he guided me to spend at least one hour on one paragraph. Earlier, I used to read a paragraph in three to four minutes and in the end wasn't able to understand the nuances of it. My purpose was not to understand the meaning of every word or sentences but to understand what the author actually wanted to convey through the passage. This strategy helped me to solve questions with accuracy, slowly and steadily, I increased my reading speed and was able to solve the questions easily on time.

For DI/LR, I solved as many sets as possible available on the internet. This cleared my basics and gave me an idea about the question being asked in the exam. Time was never the constraint in the starting of preparation. Accuracy was my aim while solving the sets. Test series of IMS really helped in sailing this section.

There is no shortcut for QA. You have to first improve your basics by not just learning the concepts but also solving hundreds of questions and I did exactly the same. After learning the basics of any topic, I solved around 50 questions and developed a holistic understanding of those topics. For QA, there is a misconception that non-MCQs are tough to solve, but these are questions which are extremely easy and one should always attempt.

Ankit: I tried doing the challenging section again and again until I was able to solve the questions in the mock tests. I did practice from IMS 500 book, online questions, and other material. I didn’t leave any topic because you never know which question can change your entire score.

Ankit: Although, I mostly used my coaching materials and IMS questions available on its portal. But, you can refer the books mentioned here to brush up your concepts.

Ankit: Giving Mock tests are like facing the reality. It’s must to give mock tests for a CAT aspirant. I have learned how to improve my scores by eliminating silly mistakes and selecting questions to optimise my performance by saving time. Managing to do only half of the questions accurately will fetch you 99 percent. So, for increasing accuracy and managing time, mock should be attempted once a week and after doing it, one should thoroughly analyse the whole mock test and write down the mistakes made. Also, note new types of question which you find in the mock test. The main significance of taking mock is to make new mistakes and never to repeat the previous ones. This really helped me in CAT.

Ankit: Mock analysis is the key to success. I always used to give around six to eight hours for a three-hour test. Mock analysis should not be done only for the questions which were not attempted or were wrong, but also for the ones which were right, because it's also very important to learn how to do that question with a better approach which can save time and that saved time can be utilised for the tough or tricky questions.

Ankit: My main focus while solving the VA section was on Reading Comprehension because I knew that it is the most important part of this section. I chose the comprehension based on my familiarity with the topic and solved it one by one. On an average, I attempted around 20 questions with accuracy being varied in every mock. But in the end, by practising more and more, I managed to get around 90 per cent accuracy in the final exam.

DI/LR - Get hold of all type of sets and questions so that no set surprises you in the exam. With this strategy, I used to solve many questions and gave numerous mock tests which helped me in the CAT.

QA was my forte but trying to find a new approach for certain types of questions helped me saving time and increase efficiency which led to increase in the overall score.

Ankit: Calculator is not much required in QA sections, but it might come handy in LRDI section. I mostly did mental calculation because I feel the CAT calculator to be not that user-friendly. So, I didn’t waste my time by using it in more than two to three questions.

MCQ in VA - I normally avoid because its very time consuming and also have very less accuracy but in QA and LRDI, I attempted them because the level of non-MCQs in these sections are quite easy.

Ankit: If you haven't started preparing for CAT yet, you can still do it by following the above guidelines. You can easily get the desired percentile if you study and practice every day. You will face many problems in the beginning but if you break those problems into smaller parts and start working on them, then no dream is too big. Last but not the least, good luck to CAT 2017 aspirants.