Kevin Chu, one of the toppers of MAH CET 2017, knew that clarity of concepts and practice are going to take him ahead in the management entrance exams. In the final days of his preparation, he used to practice two mock tests every day, and that helped him topping the exam with flying colours. Currently pursuing his passion for finance at JBIMS Mumbai through MMS in Finance programme, Kevin says that MAH CET MBA is all about how quickly you solve a question and move on to the next question as quickly as possible. He says that he solved 30-40 mock tests before appearing for the final exam. Kevin believes that if you’re not able to solve a question in the first glance, move on. Do not waste your time on a question that’s taking too much time to get solved. 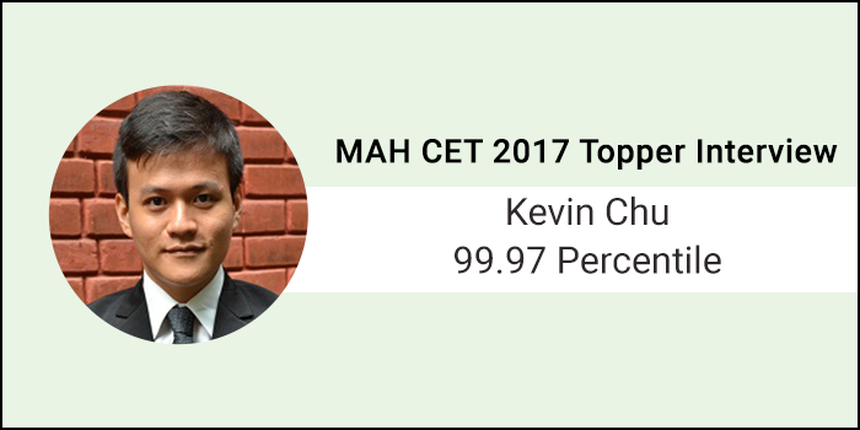 In conversation with Careers360, Kevin reveals what worked for him and what did not during the preparation and on the exam day. Read to know how he prepared and what advise he has for MAH CET 2018 aspirants.

Careers360: Which other MBA entrance exams did you appear for and what were your results in those exams?

Careers360: Why did you decide to join JBIMS? Apart from this B-School, which other admission offers did you have?

Kevin: For me, it was JBIMS all the way. Right from starting my MBA prep, JBIMS was always my end goal. This was due to the fact that it has a rich base of over 3700+ alumni, its proximity to financial hub, located in the heart of Mumbai and highest ROI being the other factors. I had calls from XLRI and MDI Gurgaon but as I was sure of converting JBIMS, I decided to not go for the interviews and instead focused on preparing for CFA Level 1 exam (In my personal opinion, all those who wants to do masters in Finance should consider doing CFA)

Careers360: What was your preparation strategy for MAH CET? When did you start preparing? How was it different from the other exams you took?

Kevin: Since I had already prepared for other entrance exams, my concepts were clear. So far, it was just about learning concepts that were not tested in other entrance exams and I started giving mock CET. During the last 10 days, I built the capacity of giving 2 mocks a day and also thoroughly analyzing them. I gave about 30-40 mocks. CET is about moving on as quickly as possible. At first glance, if you feel a particular question is not clicking, move on. Once you go through the entire paper, come back and see if anything clicks.

Careers360: Did you go for self study or took guidance from coaching institute?

Kevin: As I mentioned earlier, I was through with my concepts and hence for CET, it was all about self studying.

P.S: The strategy worked for me. It MAY or MAY NOT work for you. Instead of using this strategy, see what strategy suits you best.

Careers360: What were your strong and weak areas? How did you tackle them?

Kevin: For me, VARC had a few questions which used to trouble me. I used to give sectionals for those areas to improve myself.

Careers360: Please share your section wise preparation strategy? What are the books that you referred for each section?

Kevin: Didn’t refer to any books. All books are the same! Driving knowledge from the books is what matters.

Careers360: What is your advice for the MAH CET 2018 candidates?

Kevin: Don’t go with any prejudice about the difficulty of the paper. Play it like you’re playing in your backyard and give respect to difficult questions and quietly move on. You do not want to fight a tiger while everyone is busy fighting deer.