How IIM Calcutta Students Cracked PI WAT Rounds? - Deciding to move onto a mountain even after knowing that it will be laborious is challenging. Similarly cracking CAT and moving onto the next selection stages is onerous. All candidates who clear CAT successfully aim for IIM A, IIM B, or IIM C as their first preference. But not everyone can crack the PI WAT rounds of these A, B, C IIMs. Hence, in this article of How IIM Calcutta Students Cracked PI WAT Rounds? Careers360 brings to the future aspirants the tips and tricks on how to crack PI WAT rounds. Along with that link of interview experience of selected candidates in IIM Calcutta is also provided for detailed information. CAT is a national level exam and for the year 2020 was conducted by IIM Indore. Since CAT 2020 is around the corner, hence it is imperative for candidates to be prepared for further stages of admission. 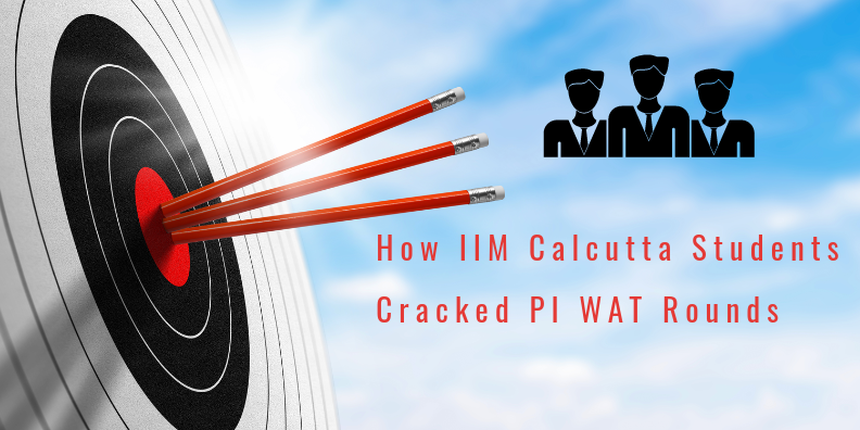 All candidates who will be appearing in the IIM admission criteria 2021-2023, must be aware of the CAT 2020 exam dates. Details pertaining to exam, result, cutoff, the start of selection are all provided under the exam dates of CAT 2020. The table below updated accordingly.

Let us look at each step one by one

In order to be a part of PI WAT rounds of IIM Calcutta or any other IIM, candidates need to clear CAT 2020 with a good score. For the year 2020, IIM Indore has conducted the CAT 2020 exam on November 29.

On successfully clearing CAT 2020, candidates will be called upon as per IIM Calcutta Admission Criteria. Usually, IIM Calcutta conducts a Writing Ability Test (WAT) followed by a Personal Interview (PI). However, last year due to COVID 19 pandemic, WAT component was scraped off from the final selection criteria.

As per topper Palash Godbole who made it to IIM Calcutta, Apart from WAT-PI and CAT, candidate’s final selection in IIM Calcutta is based upon their performance in work experience and academic diversity as well.

Weightage Given By IIM Calcutta

Let us look at what some previous year CAT 2019 toppers who made it to IIM Calcutta have to say on coaching or self study for cracking PI WAT rounds.

Palash Godbole who started his preparation in mid-December for PI WAT rounds says that he had enrolled himself with a coaching institute for mock PI and WAT practice and also took help from his seniors and friends.

For Writing Ability Test (WAT), he followed some online forums wherein essays on various topics were given. He used to write down an essay on any one topic on a daily basis. For him, writing the essay should be divided into three parts and personal ideas should be in sync with the given topic -

For Personal Interview, the focus should be on five areas namely -

Note that for PI, attending mock Personal Interviews are of utmost importance. Candidates must try to analyze the interviewer’s feedback and rectify the mistakes.

Madhuporna Pal Who Made it to IIM-C, says that she attended the mock GD sessions, practised WAT regularly since December. She also took mock interview sessions and utilized the feedback in improving herself. Madhuporna Pal thinks that it is important to introspect yourself and build your own unique strategy in order to excel in PI round of IIM Calcutta.

CAT 2019 Topper Sanjana Rout, says that talking to people/seniors with similar interests is beneficial to crack the Personal Interviews. She attended some briefing sessions at TIME and IMS. Also took part in mock personal interviews to know where she was going wrong and corrected the same by working on the weaknesses.

How to Handle a Situation if you don’t Know the Answer? - How IIM Calcutta Students Cracked PI WAT Rounds

As per the IIM Calcutta students, in a situation where one does not know the answer to any specific question or given topic, it is better not to bluff and admit it honestly rather than playing. Remember that the interviewers are very experienced in their job and can easily analyze your answer. However, if you have a little knowledge then you can make an educated guess and not a random one. In case of no knowledge, clearly say you do not know.

As per most of the students who appeared in PI WAT rounds, the panel who takes the interview is friendly. People usually have this misconception that interviews at IIMs are about Q&A sessions. However, in reality, panellists want to have one on one conversation and want to know candidates. The interviewers at IIM Calcutta will keep the interviewees on their toes. The panel usually has 2-3 members who are polite and allow candidates to think and answer.

How to crack GD PI WAT rounds of top B-schools

Topper Sanjana Rout says that she was asked a question which she never anticipated. The question that was asked by IIM Calcutta panel was “If you could be any item in a kitchen, what would you like to be?” As compared to other B-Schools, IIMs put more emphasis on academics and try to get to know students better.

Palash Godbole who appeared in IIM Calcutta’s personal interview in online mode has only two interviewers in the panel. For him, the panel was very amicable and raised questions related to hackathon idea, academic background. The panel at IIM Calcutta was ready to listen to the answers in a steady manner.

“I was asked to defend the stance of Mata Sita for wanting the GOLDEN deer (golden is the keyword here) in Ramayana,” says Madhuporna Pal who will join IIM Calcutta this year.

IIM will not release CAT exam syllabus 2023 for MBA admission....

neetpg 2022 rank is 87k,st cat ,any possibility to get MD/MS seat in mp gov medical colg?

Hey,
That's a too far rank...may be you could achieve seat in a private college...
To know rank college predictor, check out the link provided
https://medicine.careers360.com/neet-pg-college-predictor?utm_source=qna&utm_medium=neet_pg_cp
And also stay updated through careers360.
Hope it helps .
Read More
Answer

Do we have any fees concessions in Mba by clearing exams like CAT, GMAT ETC

No. We don't get any fees concessions by clearing these entrance exams. Although if you have scored extremely well both in your entrance exams as well in your undergraduate, then you might get a scholarships from the universities. You can also apply for other outer scholarships that are given to the students that have good scores and talent.

Hi, what percentile an NC-OBC female candidate should aim in CAT 2022 to get into IIM Ahmedabad? My profile is : 95/97/83. And I am from Arts background.

See since you are from arts background, and you also have a good academic record (barring your graduation percentage), so you can get a call for interview even a slightly lower percentile.

According to the previous trends, you can easily get into IIM Ahmedabad even at a percentile in the range of 92 to 95, which is a safe estimate for your admission in the OBC NCL category.

Hope I have answered your question. All the best!