MAH CET MBA 2020 Topper Interview, Jay Maru 99.99 Percentiler - It is a moment of joy when you are competing with more than a lakh students and you are among those who score 99.99 percentile. MAH CET MBA topper Jay Maru, learnt from his past hiccups where he was not able to perform well in the entrance exam and rectified those mistakes to come out in flying colours. It was living in a dream world when Jay Maru came to know that he had scored 99.99 percentile in the Maharashtra CET MBA exam as his aim is to make it to the top 15 MBA colleges of the country. Preparing for any competitive exam can be stressful for any candidate and in order to beat it, MAH CET MBA topper Jay Maru used to go in for running, do workout and also watch youtube. In an exclusive interview with Careers360, Jay Maru shares his experience about how he prepared for the MAH CET exam, for the interview, the pivotal role played by IMS coaching and the guidance that he got from mentors. Read the full interview of Maharashtra CET MBA 2020 topper Jay Maru, to know different aspects of preparation for the competitive exam so that one can crack it with ease. 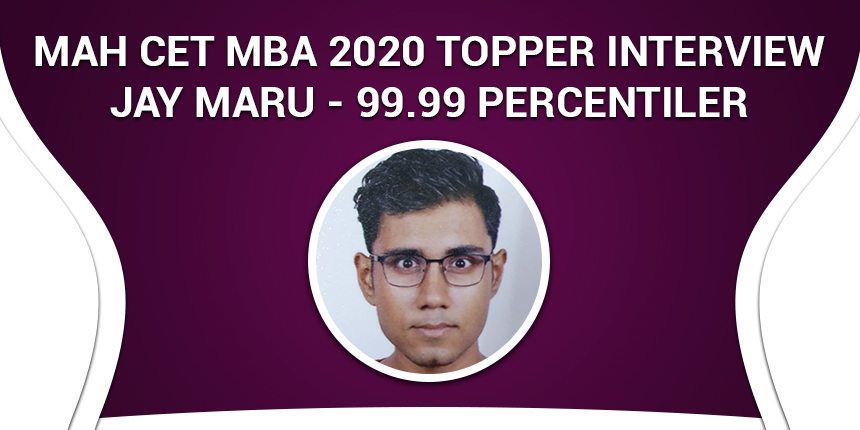 Careers360: Congrats for scoring 99.99 percentile at MAH CET 2020. How does it feel? Were you expecting this result?

Jay Maru: It feels really good. Yes, I was confident that I would clear the cut offs for JBIMS but getting a 99.99 percentile at such a score was totally unexpected.

Careers360: Tell us more about yourself.

Jay Maru: I have been a resident of Mumbai all my life. I completed my higher secondary from R. A. Podar college and my graduation in Bachelor of Management Studies from Mithibai college. In the last year of my graduation, I started preparing for various entrance exams but failed to get a good college. After that, I started working in my father's company. Along with that, I also started preparation for my second attempt and cleared it thankfully.

Careers360: Why did you decide to pursue management education?

Jay Maru: During my school vacations, I used to accompany my father to his place of work and since then, I have always been attracted to business and commerce. This is why I chose commerce stream in my higher secondary and later, decided to pursue my graduation in BMS. An MBA, for me, is one more step in the same direction.

Careers360: Apart from MAH CET, which other MBA entrances did you appear for? Did you follow any specific or exclusive preparation strategy for MAH CET vis a vis other exams?

Jay Maru: I also took CAT, NMAT, SNAP and XAT apart from CET. MAH CET, unlike most of the other exams, is a time based test. It requires focus on building a strategy after preparing concepts. After taking a mock, apart from analysing each question on its own, I also used to look at my overall strategy- what are the areas I spent most time on, were there some easy questions that I missed, was I able to at least have a look at each question etc. I also used to discuss this with my mentors at IMS and they helped me improve.

Careers360: Are you appearing/appeared in the GD/WAT-PI rounds of any other top B-schools? If yes, how are you preparing for the same and how has been your experience so far?

Jay Maru: For GD PI WAT, I focused on revising my graduation subjects, working on commonly asked questions and started going through current affairs as I hardly used to read any newspapers. It was actually very difficult to catch up with all the news as it was new for me. The lectures on current affairs, economics etc. taken by IMS helped me a lot. I also used to appear for mock PIs and GDs and the reviews from the mentors helped me improve my weak areas.

Careers360: Did you join any coaching for the entrance exam? If yes. Then was it helpful for the MAH CET entrance test?

Jay Maru: I have been a student at IMS since 2018. There were several workshops taken by IMS before CET for areas like Visual Reasoning. They proved to be very helpful. And IMS mocks were perfectly designed for CET. It gave a flavour of the actual exam so that there were no surprises.

Careers360: How did you prepare for the exam? What were the books that you consulted for each section and would recommend for future aspirants?

Jay Maru: Overall, I studied from IMS materials and for quants I referred to Arun Sharma. It is a wonderful book though it requires a lot of dedication to go through it entirely. Along with that, I took CET mock tests and analysed each one thoroughly.

Careers360: How was your exam-taking experience? Did you face any technical glitch?

Jay Maru: The exam experience was surprisingly smooth. In my first attempt though, I faced many problems like there was a fest going on in the college where the test was happening, a concert started downstairs in the middle of the test and it became really difficult to concentrate with all the sound.

Careers360: What was your exam strategy for MAH CET?

Jay Maru: I started with Abstract Reasoning, dedicated 20-22 minutes to it. Later, moved to verbal, LR and quants sections and focused on solving stand alone questions. I also used to skim through RCs, LR and DI sets and mark for review the ones that appeared easy at the first glance, rather than actually solving them right away. After round one, I moved to the marked for review questions. I used to randomly mark the questions which I knew I would not be able to attempt in the first round itself. I strictly left a question if I had spent more than 60 seconds on it and was going nowhere.

Careers360: Which is your dream B-School where you are targeting admission in?

Jay Maru: I don't have a specific dream B-School in my mind. But the college I would take admission in must be in the top 15 of the country.

Careers360: What is your career plan after completing MBA?

Jay Maru: I would like to decide that during the two years of my MBA.

Careers360: How do you unwind yourself after hectic study routines?

Jay Maru: For me, running and working out would be the go to activities to relax my mind after a long day. It also helps me stay healthy. Apart from that, some YouTube used to help me.

Careers360: What is your advice for the MAH CET aspirants who would be appearing for the test next year?

Jay Maru: In my opinion, one needs two things to perform well in CET - perseverance and discipline - perseverance to keep taking mocks and preparing even if one gets a bad score in a few of them; and discipline to realise that it is not one question that is going to help clear the cut-offs, but rather, the paper on its whole. One needs to learn to leave questions. Apart from that, I would highly recommend the students to get in touch with a mentor and keep discussing the progress with him/her. It is really helpful.

i have 95.9 in CMAT general category oms well what college i can get into

Congratulation for your result. You have really scored well. Based on your percentile in CMAT, you can get top B Schools of India. To know where you have good chances you can use http://bschool.careers360.com/pathfinder/cmat Going by last year's cutoffs, you can expect Xavier Institute of Social Service, Ranchi; Acharya Bangalore Business School, Bangalore; Goa Institute of Management, IPE Hyderabad etc. Now this is according to last years' cutoffs and you know the cutoffs vary every year as it depend on few factors. Based on your cutoff, you have chances in PUMBA also as last year the cutoff was 96 percentile.
http://bschool.careers360.com/articles/cmat-cutoff
Read More
Answer

i got 79 percentile for mba cet.which all colleges can i get into?

You can apply for PGDM colleges, through which you can get good colleges like MET, IES, INDIRA Pune

You can also use our college predictor tool

I want pumba college but I got 93 percentile in CET exam and I am OBC candidate is there any chance for admission....?

you have good percentile but admission is done on the basis of  rank. your categorical rank will be comparatively lower then general rank, so you can apply for admission using category rank.

apply for PUMBA college in first priority and apply for some other good option in 2nd and 3rd priority for security.

where can I download my scorecard from? Im applying to N L Dalmia college and they are asking for a scorecard as well. please help asap

Actually your scorecard is nothing but your result in any entrance exam .

College is asking for the scorecard (result) of entrance exam like CAT , XAT , CMAT , MH-CET etc , you can download your scorecard by downloading result from result section of your respective exam and then convert it in jpg and upload it .

For example if you wants admission through MH-CET score then search for MH-CET result on Google you will get link from various websites that redirects you there and then login in your account with your MH-CET user id and password and see option of scorecard or result. Now download it as pdf and then convert in jpg ( a format for image ) format and upload it there .

You can visit this link to know step by step procedure of downloading result :-

I have got 87.72 percentile in MAH CET 2020, which mba colleges can I get into in all India category, (general), Also what is the counselling process and its dates?

Since you are an all india category student, its very difficult for you to get a seat in MMS course under mahcet. However, you have chances to get into following colleges pgdm course:

For Pgdm you need to apply to colleges separately. For MMS the admission will be done by CAP rounds in July.

MAH MBA CET 2020 - CAP Counselling, Result Out on May 23
View All Articles