IBSAT 2015 Cutoff – The Cutoff of IBSAT 2015 will be declared by exam conducting body after the exam ends. The IBSAT 2015 exam started from Saturday, December 12, 2015, onwards. The computer-based exam was held in a window of 12 days, till Wednesday, December 23. IBSAT is conducted by IBS Business School for the MBA/PGDM admission for the academic year 2016-18. 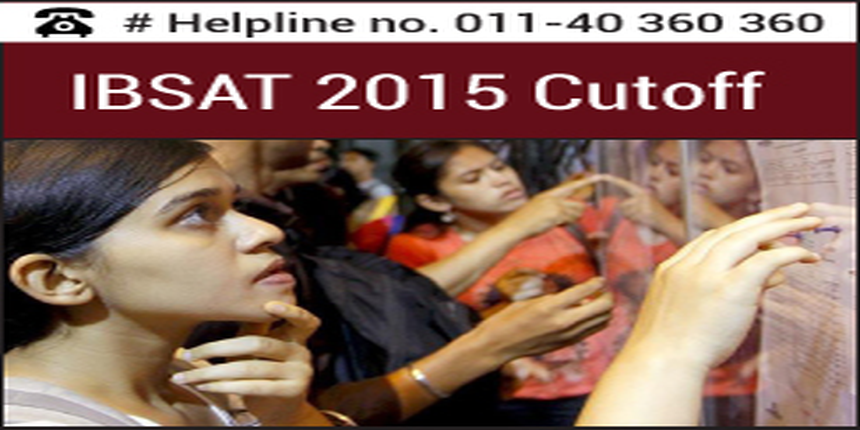 If you appeared for the IBSAT 2015 exam, you must be curious to know about the IBSAT 2015 Cutoff. It is expected that the participating B-schools will declare the cutoff after the exam is conducted or along with the result.

[How to ensure a positive outcome in your GD/PI/WAT. Click here and enroll to get Tips/Tricks and Smart Techniques to deal with situations smartly]

Based on last year, the following table brings to you the IBSAT 2015 Cutoff for the top institutes.

On the basis of the IBSAT cutoff score, the candidates will be shortlisted for the next round of selection process, Group Discussion (GD) and Personal Interview (PI) rounds. The cutoff will depend on various factors such as difficulty level of the exam, the number of test takers, number of seats in the B-schools etc.

The result will be declared on Tuesday, January 19, 2016. The selection process will be held from February 18 to 26 in IBS Hyderabad campus.

Stay tuned to bschool.careers360.com for more news and updates on IBSAT 2015.

IBSAT Participating Institute 2020 - There are 9 affiliated in...

will IBSAT score is accepted for admission in IBS colleges??

Yes the IBSAT score is accepted for admission in IBS colleges. The exam through which you can get into IBS colleges are

I have written ibsat well,and being called on first day for gd/pi ( is the interview date matters based on Ibsat score?)my gd performance is average as I took 2 chances to speak and PI was pretty good. will I be able to get Hyderabad campus?

One thing you should learn before doing MBA course is to be positive at all situation doesn't matter how difficult it is, So I suggest you to be positive for your result. What my opinion is about the selection of candidate through GD-PI process is that selection weightage is more for PI than GD, Telling about my experience I have been rejected to all those college where my interview was horrible like NIA, But I have got selected in Welingkar despite of giving average GD because of a good personal interview.

So don't take tension be positive for your result.

can any of you tell me the preference of college of ibsat?? eg ibs Mumbai, Hyderabad and etc

Thee best campus is the Hyderabad campus it is being one of good B- School with good ranking. According to rank it would be:
1. Hyderabad
2. Mumbai
3. Pune
4. Gurgaon

what is cat and xat percentile cut off required for IBS?

Cutoff refers to the minimum marks a candidate should obtain to be qualified to get admissions. The cut-offs vary every year depending on different factors. You will get the details about cutoff in the link provided below and then, you can make an idea of the score needed by you.

Answer later
Report
View All Questions
Have a question related to IBSAT ? Ask

Your IBSAT brochure has been successfully mailed to your registered email id .