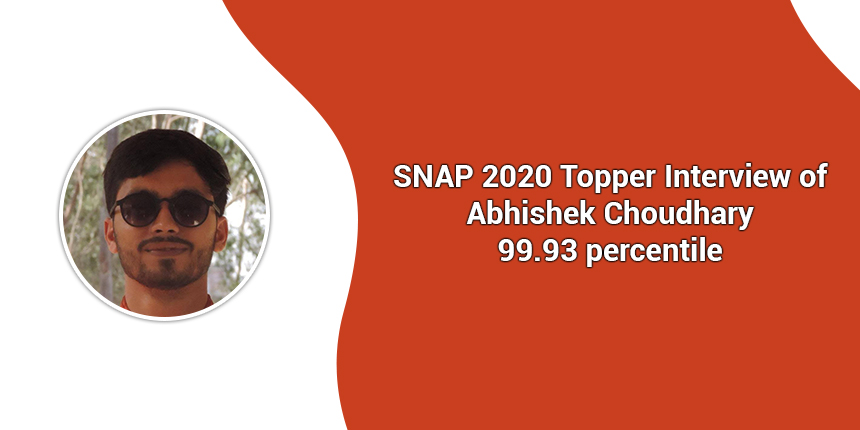 Careers360: Tell us something about yourself.

Abhishek: I am an Engineering graduate and I passed out in 2019. I did my engineering from IET DAVV, Indore and schooling from Bhopal. I work in an Analytics firm in Bangalore.

Careers360: What was your SNAP 2020 overall percentile? Apart from SNAP, which other entrance exams you appeared for and what were your scores?

Careers360: What were your sectional scores in SNAP 2020?

Careers360: For which SNAP slots did you appear?

Careers360: What was your preparation strategy? Please share the section-wise strategy in detail.
Abhishek: This was my third attempt for CAT and XAT. I appeared for CAT and XAT in 2018, 2019. SNAP was my second attempt. Last year also I appeared for the SNAP exam and scored 97 percentile. But I only applied to SIBM Pune and I didnt get a call. I took coaching during my college days but mostly for the last two years with the job, I enrolled in test series and I used to give various tests. Based on my mocks, the analysis helped me. This year SNAP exam was reduced to one hour and earlier it was two hours and with the change in SNAP pattern with 60 questions in 60 minutes, it was more like a sprint race. So you need to solve questions as fast you can. You do not have time to analyse whether I have to attempt or not because on an average it took one minute to solve the question.

Careers360: With the change in SNAP 2020 exam pattern did it affect your preparation strategy?

Abhishek: No it did not affect my preparation. But in order to make myself familiar with the changed pattern, I took as many mock tests as possible. I appeared for five to seven mocks and it was a couple of mocks by the time I appeared for the SNAP test so I got comfortable with the SNAP pattern. I got to know in order to get a high score, solve as many questions as you can. Specifically if you are looking at the level of SNAP compared to CAT, it is the easiest, you can solve the questions pretty much easily.

Careers360: How did you prepare - Self-study or Coaching? If you took coaching then from where? Please explain which one is better- self-study or coaching?
Abhishek: During my initial days, two to three years back, I took coaching from TIME Indore and it helped me in my initial level of preparation. But one should not be just dependent on coaching itself, one should try to attempt as many mock tests as one can. This is what I have been doing for preparation from past years, giving mocks and analysing the paper after the test.

Careers360: Are you working? If yes then how did you balance your preparation with a job? Please share your timetable.

Abhishek: Yes I am currently working. I just tried to manage the couple hours during the weekdays. On the weekend, I used to take 5-6 hours at least for my preparation. I mostly prepared for CAT because CAT is a comprehensive exam. Once you have prepared for it , then for any management entrance test you need not prepare much.

Careers360: According to you, what is the most important aspect of preparation?
Abhishek: According to me, the most important aspect of preparation is like in between you might feel rejected by getting a low percentile in mocks, you might get demotivated after some time. But just hold on to it, keep preparing. Get the feedback from the experts, try to figure out your weaknesses, your strengths. Most importantly I would like to say that, take a chill pill and appear for the examination because I assume under pressure most often people who are prepared as well tend to stumble under pressure and under perform in the exam. Don't let that pressure affect you.

Careers360: What are the best study materials for SNAP or other exams? Please name some study materials you had referred to during preparation which includes the names of books which you consulted for each section.

Abhishek: Not any book as such. For me the whole study material was the mock that I used to write. Mock tests and the previous year papers are the best source. For SNAP also, I analysed my strong and weak areas with the help of mock tests and how to go about the paper.

Careers360: How does one with non-English background prepare him/herself for the exam as the mode of the exam is only English?

Abhishek: Obviously for someone who is from a non-English background preparing from scratch will definitely take some time. But I dont think it's impossible. I have seen various other candidates as well who have done this and did the exam very well. The only thing is they need to practice regularly. Developing your English skills is not something that can be done in one month. So by reading daily newspapers, blogs, articles, books, within some period of time they will have good command over the language. So I think practicing daily for a longer term may actually work.

Abhishek: I decided if the paper will be on the easier side then for example there are 15 questions in English section, I have to finish this section in seven to eight minutes. Out of 15, if I am attempting 12-13 questions in 7 to 8 minutes then I have an extra edge in other sections. If you are then left with time, you can devote it to other sections like DILR and maths. So like there are questions in QA and LR which might take more than 2 minutes to solve. So on an average if you are looking at the paper, you only have one minute to solve each question. So the time you save from each section, you can use it in another section.

Careers360: How do you suggest one should keep his/her calm and confidence during the long and tiring preparation process for a management entrance exam?

Abhishek: Take a break for a couple of days. Go out with friends, party, take a vacation because considering this covid situation, it was pretty much mentally challenging all throughout your day you are sitting at home, you are studying, doing office. There are not many activities to do and there are no any such places to hangout. But a person who feels bound up in between his/her preparation, I would suggest to take a break for a couple of days and enjoy with friends.

Careers360: What is your message for future SNAP aspirants?

Abhishek: My message for future SNAP aspirants or for anyone appearing for MBA exams is that you just need to improve your speed and accuracy. Try to focus on both of them. And compared to CAT this is a very easy exam and we have to solve as many questions as we can.

SNAP Preparation Guide 2021 - Learn all the important tips and...

How to prepare for SNAP 2021 in two months

SNAP 2020 topper Minkesh Devani says “A leader should have kno...

Yes, I believe having a percentile of 92.14 in SNAP 2021, and an average GD-PI/WAT, besides having a strong profile with a work experience of 39 months, you still have fair chances in securing admission at SIOM Nashik. Trust your Preparation and hope for the best.

For more information about SIOM Nashik do follow the link below

i got 70 any chance to get college in mass communications

As per the details mentioned by you, your query is not clear. Please mention more details of the institute and the examination in which you appeared and get 70 marks. Please elaborate your question and feel free to ask your doubts here for quick resolution of your query. The cut off depends upon the number of seats available, the difficulty level of paper and number of candidates writing the examination. And, hence varies every year depending on these factors.

I want to know about xat, snap and nmat exam.

Xavier Aptitute Test (XAT) is the admission test for admission to MBA/PGDM program in XLRI and other top MBA colleges.

SNAP is a postgraduate entrance examination conducted by Symbiosis International University for admission into the 28 programme offered at its 16 institutes.

NMAT is a national level MBA entrance test conducted for admission to NMIMS University and other reputed B-Schools in India.

I got 94.5 percentile in SNAP. Can I get a call from scmhrd pune?

If we analyze the last yea cutoff your SYMBIOSIS CENTRE FOR MANAGEMENT & HUMAN RESOURCE DEVELOPMENT(SCMHRD) chances are less SCMHRD is expected to have a cutoff of 97-98 percentile. But don’t get your hopes down, as there may be variations in the percentile required for calls, this year. SCMHRD is a fantastic college full of brilliant students with both work experience and freshers. For more information you can visit the following link.

I have got 92.9 percentile in snap. Can i expect a call from sibm Pune or scmhrd

The cutoffs are decided based on various factors like number of applicants, number of seats available, difficulty level of the exam etc.The expected percentile cutoff for SIBM, Pune is 98.5 and for SCMHRD, Pune is around 96. So in your case chances may be little low for a call from both institutes but the cutoffs may vary slightly so you can apply and try , other factors like past academic record, work experience etc will be considered. If you get a call, then do take Group Exercise (GE), Writing Ability Test (WAT) and Personal Interview (PI) rounds seriously as they are considered for final selection.

SNAP Result 2020 (OUT): Get Score Card and Know Steps to Download Results