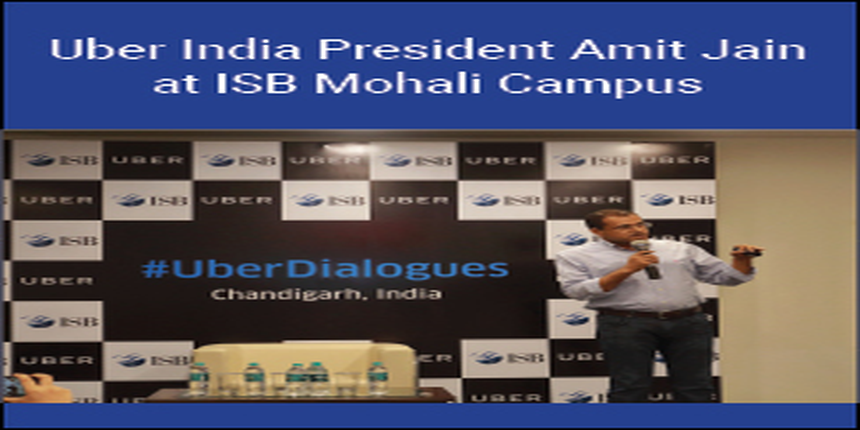 Amit Jain, President, Uber India interacted with the ISB Mohali students on July 28. In his address, Jain talked about Uber India’s journey, future plans and its contribution to India’s economy and creating the culture of micro-entrepreneurs. Jain, an IIT Delhi alumnus said, “Uber started with a very simple idea. How to get people from Point A to Point B. It took 6 years to reach the 1 billionth ride. After that, it took 6 months to get to the 2nd billionth ride.”

According to Jain, an MBA from Stanford Business School, Uber started in India as a luxury cab service, but soon recognized its market here and began to cater to the needs of the clients. 3 years and 28 cities later, Uber in India is a force to be reckoned with. “Our vision is to provide safe reliable convenient affordable transportation available for everyone,” he said. He also shared how Uber has factored in reducing congestion and increasing convenience in the cities it operates in.

As part of a Q&A session that followed, Jain addressed students’ queries about Uber’s operations, intentions and its seemingly bright future in India. "In a developed market you have more means of public transport. In India that delta is even wider,” he said. He also added that Uber is making an attempt to bridge this gap while holding the needs of their driver partners as important as their riders. They allow the masses access to jobs, a livelihood with respect and dignity, in an essence “creating micro-entrepreneurs”. Drivers often start out driving a rented car, and then buy their own car, and many often end up buying multiple cars that others can drive. Uber Dost is a platform that allows drivers to earn money by referring other drivers to Uber.

As a solution to the increasing congestion and pollution in cities, he cited the example of Uber Pool that operates in 5 cities in India. “In Delhi NCR itself, 70% cars have single passenger. 20% of open space is used for parking,” he stated. While public infrastructure and development takes time, Uber is providing a solution until then with its shared cabs.

Further, he commented on the efficiency at Uber that has helped them gain success in India. Jain mentioned that what Uber does differently is to concentrate on customer experience. “Black and yellow are utilised at 5-10%. Disruption happens when you match supply with demand effectively enough to gain almost 50% efficiency, as we have experienced.”

Jain stated that their prime marketing method is word of mouth. “We have never done billboard and TV ads, we’ve always shied away from traditional big campaigns. We just want to build a product that someone will want to refer and will use again.”

He also attempted to remove the stigma against surge pricing. “Surge pricing only matches supply and demand. We pay surge prices every day when we book flights and rooms in hotels. It’s all dynamic pricing,” was what he commented. He also answered questions regarding when Uber plans to go public - “Not any time soon. We are fortunate not to need public capital today. Going public brings a whole lot of external pressure that you don’t have when you’re a private company.”

Stay tuned to bschool.careers360.com for more news and updates on ISB.

Networking with professionals and consultants at campus h...

how to get admission indian school of business and finance ??

View All Questions
Have a question related to Indian School of Business, Mohali Campus ?

Your Indian School of Business, Mohali Campus brochure has been successfully mailed to your registered email id .