How to Crack GD-PI - Akanksha Sharma holds the distinction of topping CAT 2016 secured herself a seat in IIT-Delhi’s Department of Management Studies. An Electronics and Communication Engineer from Guru Gobind Singh Indraprastha University Delhi, she was shortlisted by IIM Indore, SJMSoM, IIT Bombay and SPJIMR Mumbai. In the PI-WAT/GD experience series of Careers360, Akanksha Sharma shares her experience of participating in the Group Discussion and Personal Interview at DMS, IIT Delhi and other B-schools. 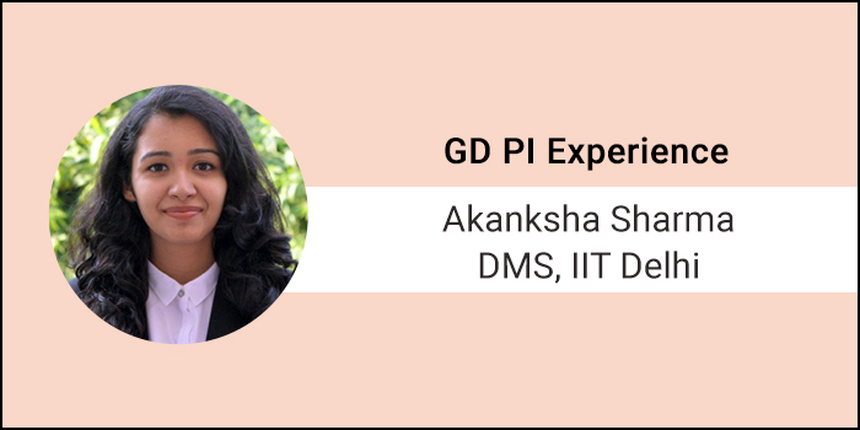 Akaknsha mentions that the GD-PI rounds at DMS, IIT Delhi was much smoother as compared to her experience at other B-schools. According to her, it is mainly because the Admissions Committee of DMS, IIT Delhi comprises of students members, who have themselves gone through the entire selection procedure. She was a fresher during her interviews and most of her questions were on the technical aspects. Although she could not answer several questions related to academics but her panellists were not rude, which eventually made her PI experience at DMS, IIT Delhi the best. Regarding GD, she feels he quality of points is more significant than the quantity.

How to Crack GD-PI

Careers360: What is the basis for selection at DMS, IIT Delhi?

Akanksha: The cumulative score of 10th, 12th, Graduation, CAT, GD and PI is the basis for selection. We also had to write an SOP for the program.

Careers360: Please guide us through your overall experience of the selection procedure at DMS, IIT in detail.

Akanksha: After securing a decent percentile in CAT, I was expecting a call from DMS, IIT Delhi. The overall process went very smoothly, courtesy of the Admissions Team here. The GD topic was very generic - 'Sustainable Development in India'. We were given two minutes to ponder over and then discuss on the topic for another 15 minutes, followed by conclusion and summing up of the entire discussion. I later had my interview for about 30 minutes, which was mostly CV-based. Being an engineer fresher, I was asked most of the technical questions and a few current affairs based questions.

Careers360: How is the selection procedure at IIT Delhi different from the other B-schools where you had appeared for interviews?

Akanksha: The process at DMS was very smooth compared to IIM Indore, SJMSOM or SP Jain, mainly because the Admissions Committee comprises of many current students, who have themselves gone through the entire selection procedure.

Careers360: What about the personal interview? Tell us about your experience, your panel size and how did you feel facing them?

Akanksha: There were two professors in the panel, who were very humble and tried to make me feel at ease. Thus, I wasn't worried during the process.

Careers360: Among all the interviews you have appeared in, which one was the best and why?

Akanksha: The best PI experience was certainly with DMS, IIT Delhi. The questions were not being shot at me, they were very flexible and not out of context. The panellists were cordial and not mocking the interviewees.

Careers360: Did you find any question difficult to answer? How did you tackle them?

Akanksha: A few technical questions pertaining to Analog Electronics were difficult for me to answer. I had to put efforts to think and respond back. Panellists were very humble to give me time to think without stressing me out.

Careers360: When you had no answer to a question, were the interviewers harsh on you?

Akanksha: I faced a hard time with one of the technical questions. I spoke about whatever I could on the topic, but the panel wasn't rude, rather they directed the next question to one of the areas I was at ease with.

Careers360: What were the most interesting questions you were asked? Tell us about your replies to them as well.

Akanksha: They asked me about the working of antenna and my opinions about a few current affairs topics. I gave my opinion about the functioning of Infosys, and the world political environment.

Careers360: How is an IIM interview different from a non-IIM yet top B-School interview?

Akanksha: They are no different, rather there were a few similar questions pertaining to my domain.

Careers360: How did you go about the preparations for PI? Did you look up some questions?

Akanksha: I thoroughly went through my CV, strengths, weaknesses, why MBA, why this college, and two subjects of graduation.

Careers360: What do the panellists look for in a candidate? Any specific qualities, according to you?

Akanksha: Well, I think the jury basically looks for confidence, clarity in life, positive approach towards everything and a slight smile while speaking.

Careers360: How many candidates were there in your GD?

Akanksha: There were 10 candidates in the group.

Careers360: What was your approach towards the topic?

Akanksha: I introduced the topic and structured the discussion along with stating a few aspects about the topic. Each of us had enough time in our hands. There was no hassle in the GD and it was peaceful.

Careers360: How much did you contribute towards in the discussion?

Akanksha: I participated in the discussion numerous times. More than the quantity, I felt the panellists were looking for the quality of points.

Careers360: Did the discussion reach a conclusion?

Akanksha: We mentioned a few key points in the end to sum it up.

Careers360: What was the overall experience of this part?

Akanksha: I had a very good experience. Indeed, all my misconceptions of MBA GDs being tough have been shattered with this one interview. IIT Delhi interview gave me a very good learning in terms of knowledge and also gave me confidence to face many more interviews in the future.

Know the details about when and how to start preparation for C...

To prepare for your CAT in 4 months first you need to Understand the exam pattern  , there will be a total of 100 mcqs.

Your complete CAT paper is divided into three major sections :-

Top books which you can follow for CAT are listed below section wise  :-

* How to prepare for Quantitative Aptitude for the CAT by  Arun Sharma :-

it is a great book covering all  topics as per CAT syllabus, with good and elaborative examples , questiond divided into 3 levels of difficulty .

* Logical Reasoning and Data Interpretation for CAT by K. Sinha Nishit :- it covers both fundamental and advanced topics with explained examples , questions of three difficulty  levels are there etc

* How to Prepare for Data Interpretation for CAT by Arun Sharma :- it has strategy and concepts to solve questions quickly and accurately, excerises are designed in a manner to boost Logical thinking etc

* Mastering the Verbal Ability for CAT by Ajay Singh:- it has more than 200 passages for practice ,test papers of other B-School etc

* How to Prepare for Verbal Ability and Reading Comprehension for the CAT by Arun Sharma and Meenakshi Upadhyay: - it has past years papers analysis , topicwise segregation is there along with mock papers

For detailed information go through

*Make a routine to utilise the time in the best possible way and to avoid procrastination and laziness .

*Keep short breaks of 20 to 25 minutes after every 1.5 to 2 hours between your studies in your routine .Half of the time of your studies must be for practicing questions

*Solve previous  year question papers of CAT :-it will let you know the examination pattern, type and difficulty level of questions, also concepts behind the question often gets repeated, so you should definitely solve year papers

*Once you are done with complete CAT syllabus then go through CAT mock test papers , it will let you know your preparation level and and weak areas so that you can work on them and perform well in your examination

For detailed information go through

I am weak in varc section. How to overcome that section ana how to complete the whole syllabus in 3-4 months

Hello hope you are doing well.

VARC Section of CAT is one of the most scoring section. It requires lot of practice and concentration to choose the correct and accurate option.

Below are the some measures you can take to improve your score in VARC Section:


Below are the steps for completing the whole syllabus in 3 months:


Hope this will help you.
All the best.

What is the CAT Cutoff for IMI Bhubaneswar?

80 Percentile For Merit Scholarship and 55% for Admission

How is Xavier School Of Rural Management Bhubaneswar? What is the required CAT percentile to get a call from this college?

You can use the careers360 platform for finding the review of Xavier School of Rural Management Bhubaneswar. The reviews are written by the students studying in the institute. The link is given below

You can refer the below link to know XIMB cutoff

Regarding your question, the good news is that your CAT marks aren't contingent on your performance in 10,12 Board exams and college exams. Also, if you do well in CAT, you can get into a good management school with 90% above, hopefully an IIM.

All the best! Prepare well