How to Crack GD-PI-WAT: Clarity of thoughts and genuine answers helped me clear interview round, says Shailav Goel of MDI Gurgaon

How to Crack GD-PI-WAT: Shailav Goel a student at MDI Gurgaon who started preparing for his GD PI-WAT a month before the commencement of the interview process says that a proper preparation strategy is required to improve on ones ability to structure their thought and concepts on the given topic.

Shailav appeared for the selection process of both IIMs and non IIM institutes and found the procedure to be similar. He shares with Careers360 his best PI session which revolved around applications of his learning at workplace in an entirely different scenario along with a discussion around life experiences. 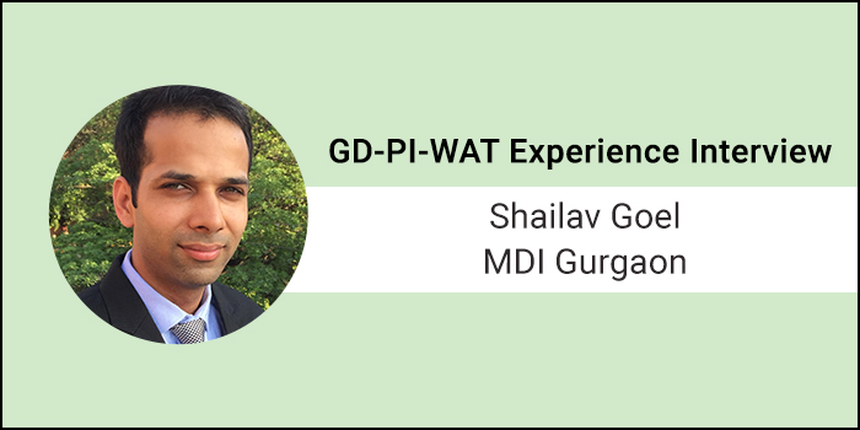 How to Crack GD-PI-WAT

Excerpts from the interview

Careers360: What is the selection procedure at MDI Gurgaon?

Shailav: They called candidates based on the CAT score and profile after which there is a Written Ability Test and Group Discussion followed by personal interview. The topic of WAT and GD remains the same.

Careers360: Could you share in detail your overall experience of attending the selection procedure at MDI?

Shailav: It was a really good experience with a different set of questions asked in the interview. The questions tested not only the academic proficiency but also the life experiences of the candidate.

Careers360: Which other B-Schools’ selection procedure did you appear for? How was your experience in other institutes in contrast to MDI Gurgaon?

Careers360: What was the WAT topic given to you? How did you structure it? How did you find the difficulty level of the topic?

Shailav: The topic given was “The issues in the Indian Education sector”. It was an easy topic and the time given was sufficient to gather and structure my thoughts and concepts.

Careers360: How did you prepare for WAT? When did you start your preparations for the selection rounds?

Shailav: The preparation focused around general reading and keeping in touch with the current happenings in and around the world. I prepared for about a month before the interviews.

Careers360: Do you think that a separate preparation strategy is required for WAT?

Shailav: WAT does require a separate preparation in which one needs to improve on the ability to structure the thoughts and write in a coherent way.

Careers360: Could you share the WAT topics which you were asked during the admission rounds last year?

Shailav: The topics revolved around the education system, GST, and current trends in the industry.

Careers360: According to you what are the possible ways to tackle a WAT topic? What should one do if they do not have sound knowledge about the topic asked to them.

Shailav: It is rare to have a topic that one doesn’t know about. But just in such case you get one,  you could just take it generally and try to incorporate basic stuff.

Careers360: What was your personal interview experience? How big was the panel and how did you feel while facing them?

Shailav: The panel consisted to two professors. Both were quite friendly and made the environment conducive for sharing thoughts.

Careers360: Among all the interviews you have appeared in, which one do you think was the best and why? Share your best PI experience with us.

Shailav: The best experience was definitely at MDI as it revolved around applications of my learnings at workplace in an entirely different scenario along with a discussion around my life experiences.

Careers360: Which according to you were the most difficult questions? What were your answers to those questions?

Shailav: One of the most difficult question according to me was to tell something different about my life that was not reflected in my CV. I was not a prepared for such a question hence the answer I provided was also vague.

Careers360: How did you handle the questions for which you had no answer? What was the panel reaction to it?

Shailav: I just told them about the ones I didn’t have any idea about. The panellists were easy and wanted a genuine reply.

Careers360: What were the most interesting questions you were asked? Please share your answers as well.

Shailav: The most interesting question according to me was a discussion based on a book I had read recently and it went really good.

Careers360: How did you prepare yourself for your PI? What were the PI questions that you searched for as part of your preparations?

Shailav: I just reflected upon my life thoroughly and tried to be clear about why I wanted to enroll for a management role.

Careers360: What factors or qualities, you think does the PI panel looks for in a candidate?

Shailav: I feel clarity of thoughts and genuine answers is what the interview panel looks for.

Careers360: Coming to your GD experience, how many candidates were there in your group and what was your approach?

Shailav: I had around 10 candidates in my group. I tried to get to the basics and approached it in a way different from others. I put forward my points and was able to contribute substantially to the discussion.

Careers360: Did the discussion reach a conclusion? What was the overall experience of this part?

Shailav: Yes it reached a conclusion. The experience was enriching as I got to know the different perspectives of other candidates as well.

Know the details about when and how to start preparation for C...

Regarding your question, the good news is that your CAT marks aren't contingent on your performance in 10,12 Board exams and college exams. Also, if you do well in CAT, you can get into a good management school with 90% above, hopefully an IIM.

All the best! Prepare well

Admissions to all PG Diploma courses of C-DAC are done through C-DAC's computerized Common Admission Test (C-CAT). The applications are opened in December for February admissions. Till now it has not been announced the final date when application start.

Hope My Answer Helped You

Best of Luck for Future.

Can I prepare for CAT exam in 3-4 months is this possible?

yes you can prepare for CAT exam in 3 -4 months . this is possible . you can join crash course of times coaching . you can achieve this goal . you should study only for exam point of view for this you should only study those topic which have huge weightage in cat exam . you should solve past 10 years question paper to get idea.

hope this help you

Hello aspirant,
Don't worry, we are there to help you in a very efficient manner. Please go through this link available here:

- https://bschool.careers360.com/articles/cat-preparation-how-prepare-for-cat-without-coaching
How to Prepare for CAT 2020? Two Modes

There are two modes for CAT 2020 preparation. You can opt for either of the two or can go with a mix of two:

Prepare with Self Study with right CAT material, or

5 Step Preparation Strategy for CAT 2020
Even if you make a choice between self study or joining a coaching, the 5 step strategy as shared below for CAT exam preparation 2020, according to the experts must consist of following components and must be completed at least a fortnight before the CAT exam day.

CAT Exam Preparation without Coaching or Through Coaching? Make a choice

Best of luck!
I hope this was very helpful to you!
Read More
Answer

I am currently pursuing B.com (Hons), i am in the second year. I got 93% in 10th, 83% in 12th and I was planning to give CAT in 2021 without any work experience, is there a chance of getting admission in top IIMs given that i score really good percentile?

Yes definitely, if you score well in CAT then you have chances to get into top IIMs given that you perform equally well in WAT and PI round. Your CAT percentile will help you in your shortlisting but your final selection will depend.upon how well you perform in wat/pi. Your acads are good so you won't face any problem there. Also only 10% weightage is given to work experience, so you still have 90% in your hand to give your best. I'll recommend you to work hard and score at least 98 percentile if you want to get into top IIMs.