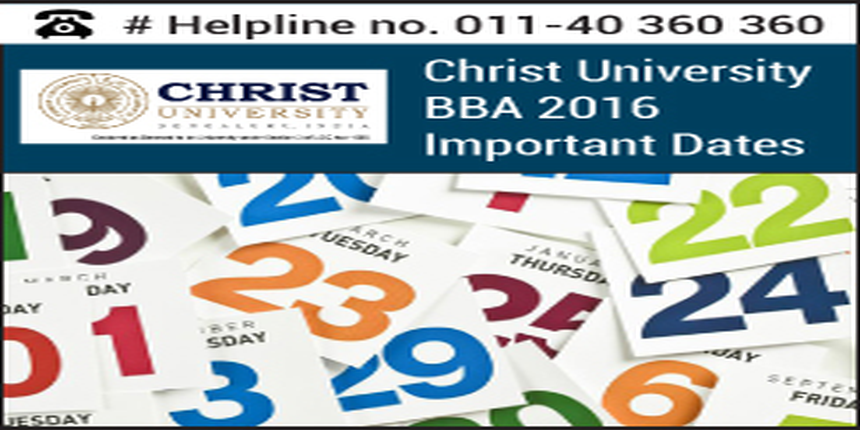 As per the official Christ University BBA 2016 Important Dates, the application process for the test started from December 8 and continued till April 16, 2016. Read the entire exam related important dates in this article below.

As per the official announcement, the Christ University BBA 2016 test was conducted on April 24, 2016. After the test, the list for appearing in the MP and PI will be announced on April 24-28, 2016, and the final selection list will be declared on May 2, 2016. Christ University conducts its BBA entrance test for admissions to its all BBA programmes.

Stay tuned to www.bschool.careers360.com for latest news and updates

I hope you are having a nice day!

So keep studying and keep growing.

All the best for your future.

Is persuing B. Com (Hon) a better option than BBA? Please prefer colleges for the same. (Preferred city Bangalore)

Hello ,first of all it depends on your field of interest and skills. Both the course have different carrer scopes. As per as Better and high salaried job I would recommend you to choose MBA for which doing BBA is more closely related than doing bcom .There are plenty of carrer options after completing BBA. So BBA would be better

Hope it is helpful

what is the syllabus for the entrance exam?

Entrance test for BBA Program at Christ University is of 120 minutes in offline mode, total marks being 120(one mark for each correct answer), there is negative marking scheme.

Syllabus for BBA Entrance Test is as follows-

How difficult is it to qualify Christ University BBA Entrence Exam? What all i should prepare, I am studying right now in 12 Com+M cbse

As you ask about how it is difficult to qualify Christ University BBA entrance exam..

so as you are mentioned that you are in 12 th . So you have enough time to prepare for that exam.. there  is nothing like hard exam ...you can easily qualify that exam by clearing your basics and doing some hard work.. stick to the syllabus of the entrance exam clear your all doubts and go through whole syllabus and revised 2 or 3 time for your entrance exam . This will help you more qualify in exam.

View All Questions
Have a question related to B.B.A ?

Your Christ University Entrance Test brochure has been successfully mailed to your registered email id .