SP Jain Institute of Management & Research (SPJIMR) has released the final placement report for the PGDM Class of 2019 with Consulting being the highest recruiting domain. A total of 111 companies participated in the placement to make job offers to the batch of 239 students. The average salary offered was Rs. 22.90 lakhs per annum. A lot of major companies took part in the process including McKinsey & Company, Boston Consulting Group, Bain & Co., Google, Microsoft, Goldman Sachs, Tata Administrative Services, etc. 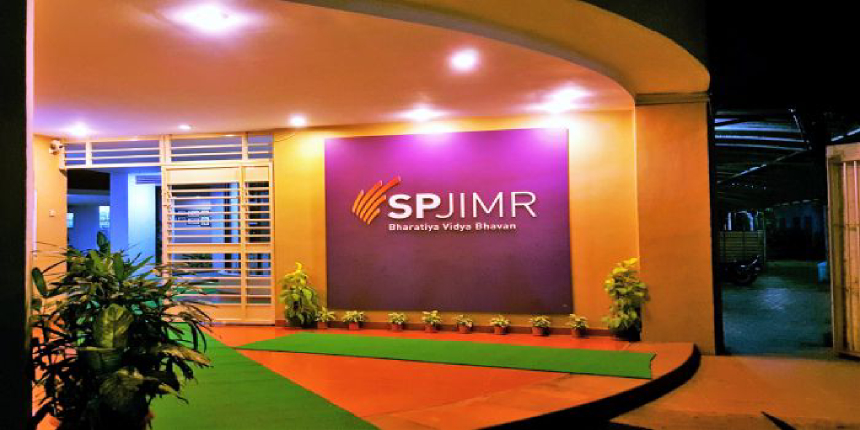 Some other key points of the placement:

The median salary of the batch was Rs. 22 lakhs per annum (LPA), with over 72 per cent of the batch receiving offers of INR 20 LPA or above. Twelve international offers were also made this year.

E-commerce stood out like a sunrise sector with the highest increase in the number of offers made compared to the previous years. Consulting companies hired 35 percent of the batch.
More than 50 per cent of the batch took up PPO/PPI opportunities through their autumns internship with leading companies.

Now, let’s take a look at the function-wise placements.

E-commerce
E-Commerce saw the highest increase in roles offered compared to previous years. About 17 percent of the batch was placed in e-commerce firms, which included regular recruiters like Amazon, Cloudtail, Flipkart, Uber, Paytm and Go-MMT. In addition, this placement season saw participation from growing companies like OYO Rooms, Unacademy, Lenskart and Ninjacart among others. This year recorded a significant increase in the number of Product Management roles offered by these e-commerce companies. Other profiles offered by the e-commerce companies at SPJIMR included Program Management, Digital Marketing, Supply-Chain Management and Operations Analytics.

IT/ITES
IT companies such as Microsoft, Google, Media.net, Wipro, Infosys, and Capgemini offered sales and consulting roles on campus. IT majors made offers to 9 percent of the batch. Companies such as Hindustan Unilever, Asian Paints, Pidilite and Mondelēz offered corporate IT roles. Analytics roles were offered by giants like American Express, Barclays and Philips. Overall, a third of the batch would join IT and E-commerce companies. The average year-on-year increase in compensation for the Information Management specialisation exceeded 21 per cent, reaffirming this as a key growth area.

Name of the major recruiters

Dr. Vasant Sivaraman, Professor and Chairperson PGDM Programme said, “Our programme architecture enables participants to complete courses in their area of specialisation before company internships. While the quality of their internship contribution is strong, the individuals also benefit in terms of more clarity on career roles when it comes to the final placement process.”

“Together with PPOs and PPIs there is a sharper focus on final placements, something reflected this year as well. The roles and companies highlight the underlying shift in the economy- a blend of traditional blue chips and new industries,” Dr. Sivaraman added.

Alumni interview “SPJIMR has added a new perspective towards e...

Know all the details about the life at SPJIMR like infrastruct...

SPJIMR placement reports, check out all the details regarding ...

i have 61% in my 12th can i get top b school like sp jain ,xlri,fms or iims or good b schools in abroad?

Let me make one thing clear. The only thing that you can stop you from getting admission in these reputated institutions is the same who can get you admission. It is you.

Always remember your will power is the one standing between you and your  admission in these colleges.

Now you have already appeared for 12th and youu cannot change that. What you can change is your tenacity and your urge to succeed.

Now I am not a motivational speaker, but you need to realize that if you preapre well and score high marks and acheive high rank, you will definitely get admission in these colleges.

Prepare well, give your best and hope for the best. You will definitely get admission and have a great career.

95 percentile is quite good percentile. IIM call doesn't depend only on CAT score.There are various other factors also:

Even some students who didn't have good academic even get call on the basis of their profile.

All IIM want diversity in their campus .So there is good chance for you for getting call from IIM.

HOPE THIS ANSWER IS HELPFUL FOR YOU.
Read More
Answer

Congratulations for your mock tests score.

The cut-off for top institutions depends upon your background, if you are an Engineer, you are required to score 99 percentile for top 10 colleges of India for MBA which includes IIM A, IIM B , IIM C etc. And if you are from non engineering background then 97-98 percentile also may works for you (general category).

As your 10th and 12th score is also good, you have great Chance of getting Interview calls from old IIMs and definitely from new IIMs too, also Colleges like IMT Ghaziabad, MDI gurgaon will definitely gives you an interview call if you apply for them with 98 percentile.

As currently you are scoring 96-98 percentile, try more hard and don't panic in exam, you may score more than 99 in actual exam.

I hope this information would be helpful for you.

All the best for your bright career ahead.

Basically to get admission in top IIM'S you will have to get at last 99 percentile or above, still there is no guarantee that you will achieve it.

For Final calling they give 10% -20% only and remaining is given to GD, PI and CAT score.

I am pursuing my BBA how much percentile i have to score in CAT to get top tier colleges like IIMs or FMS or sp jain? And i am from General category.

Hello
Percentile that you should score in CAT exam in order to get top business School depends upon your percentage in bachelor or academic record because for the final admission in the top business school your overall record will be seen so if your percentage in bachelor and your intermediate is good enough then you can consider your good chances of admission with 96 or more percentile, if you don't have good enough record in your academics then you will have to score more than 99 percentile to get into top business school.
Best of luck.
Read More
Answer

Your SPJIMR, Mumbai brochure has been successfully mailed to your registered email id .