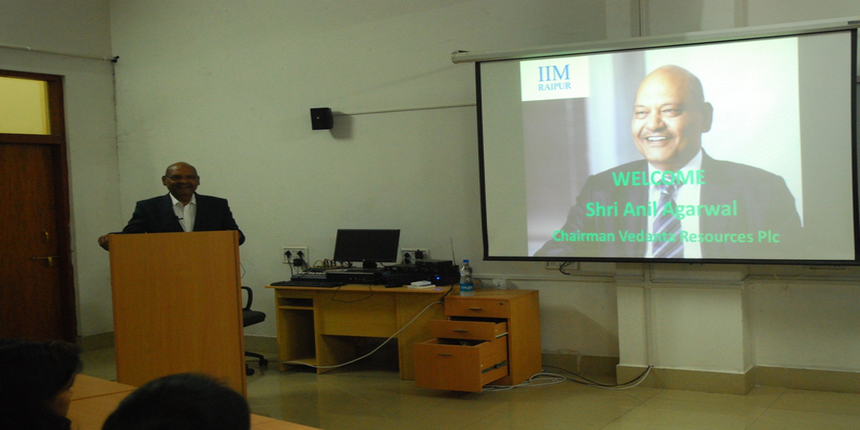 Agarwal shared his experience as an entrepreneur and his mantra for of success with the students of IIM Raipur. He gave an account of the rise of the company from a small scrap cable business to owning a 14 billion dollar company Vedanta, which is India’s first private company to be listed on the London Stock Exchange. He encouraged the students to develop entrepreneurial spirit and the ability to “think” and “explore” widely.

According to him, the health of a country’s GDP lies in the optimum utilization of its natural resources but at the same time the company aims at minimizing the damage to the environment from their projects.

He also emphasized on contributing positively towards social and economic welfare of the society and conservation of the environment. This belief helped him to become the owner of Zamibia’s Copper Company with largest turnover.‘Health, Education and Livelihood’ being one of the main agendas has helped Vedanta reach approximately three million people across 550 villages.

His suggestion to the future entrepreneurs was to find out and work towards the right motivation, hard work and choice of correct path. He concluded his thought by saying, “Everybody has a right to build their own destiny.”

Firstly, I would like to congratulate you on getting such a decent percentile. You have done hard wok throughout the year and this has reflected in your percentile. I addition to that, you have an awesome profile. Being a B-School student, I have seen placement processes where profiles similar to yours are getting shortlisted for interviews for summer placements and final placements. The fact that you got 90+ percentage in both class 10 and 12 would be like icing on the cake where your perfect work experience will pull up your CV. So you won’t be having any kind of problem if you keep your pointers good in academics during your MBA, though it doesn’t matter much.

I am jotting you down some of the top colleges and their CAT cut offs:

These are some of the top colleges and the average placement packages that you can expect at the end of your 2 year MBA program.

You will be getting a call from mostly all of the baby IIMs, namely

What I can say is that, you have a very good chance of converting some of the renowned B-Schools in India. So just start preparing for the initial Group Discussion, Case Presentation and Personal Interview rounds.

I hope I have been able to solve your query. Do write to us in case of any doubts and we will be happy to help. All the best!!!

Hello Everyone, I am a hotel Management Graduate and currently pursuing PGPMWE from IIM Raipur. As I studied a bit of statistics here, it really drew my attention. Now i really wanted to give the JAM exam and pursue MSc. Am I eligible to go ahead?

Dear Rahul, you mentioned that you are a Hotel Management Graduate but haven't mentioned your aggregate in Bachelor's degree. If you belong to General Category or OBC, you should secure a minimum aggregate of 55% and it is 50% for SC,ST,PWD Categories. Now for being eligible for M.Sc Statistics, you should have studied Statistics atleast for 2 years in your Bachelor's degree. Now PGPMWE is a Post Graduation course and that is not considered while evaluating your eligiblity criterIa. So unfortunately, even if you scored the aggregate required against your Category, if you haven't studied Statistics in your Bachelor's degree, you are not eligible for JAM 2020.