IIM Sirmaur Cutoff - Indian Institute of Management (IIM) Sirmaur will release the cutoff for its batch of 2020 after the declaration of CAT 2019 result. The expected cutoff for IIM Sirmaur is 95 for the general category, however based on the previous years records the cutoff changes gradually. IIM Sirmaur cutoff is the minimum percentile both overall and sectional to be scored by the candidates to be considered eligible for the admission process. Candidates can now check their admission status of the MBA (T&HM) programme by entering their CAT registration number and email id. The cutoff of IIM Sirmaur will also include the past years cutoff trends for different categories. This year CAT examination was conducted on November 24. By knowing the previous years IIM Sirmaur cutoff, candidates will get to know what are their prospects of making their way to the next round of selection. To know a different aspect of IIM Sirmaur cutoff, read the full article.
Latest: Candidates can now now pay the fees of acceptance (2020-22), term 1 (2020-22) and term 4 (2019-21). Click here to check more details. 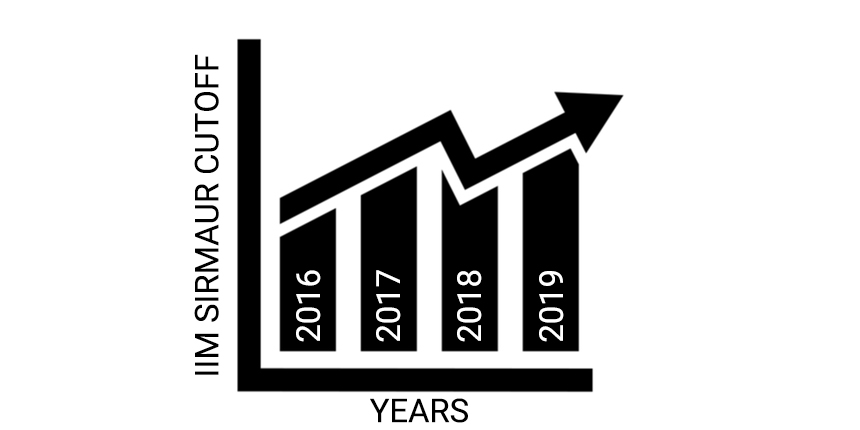 Cut off IIM Sirmaur for the academic year 2020 will be released only after the declaration of CAT 2019 result on the official website. Based on the previous year records the expected IIM Sirmaur cutoff is mentioned below:

IIM Sirmaur Cutoff over the past years

The exam pattern for CAT was different before the year 2015. Earlier it was conducted in 2 sections: Quantitative Ability and Data Interpretation, Verbal Ability and Logical Reasoning. The cutoff of IIM Sirmaur for CAT 2014 is mentioned in the table below:

Some Facts about IIM Sirmaur:

IIM Sirmaur is a third generation IIM established in the year 2015 by HRD Ministry.

Temporarily located at Himachal Institute of Technology, Sirmaur it operates under the mentorship of IIM Lucknow.

The campus is spread over an area of 200 acres.

It provides a two year Post Graduate Programme in Management.

The fee of the college is approximately 10 Lakhs.

The selection process for IIM Sirmaur is based on Common Admission Process (CAP) which is based on the following steps:

Candidates are shortlisted on the basis of their CAT scores for Written Ability Test and Personal Interview Rounds.

A final merit list is prepared based on composite score which is calculated from various parameters such as :

Question: What is the minimum percentile required to get a call from IIM Sirmaur?

The Minimum percentile in order to be considered eligible for IIM Sirmaur admission was 95 previous year. However, getting a minimum percentile does not necessarily means that you will get a call from IIM.

Question: How can someone get admission into IIM Sirmaur? What is the selection process and fee for IIM Sirmaur?

The first step to get admission in any IIM is to get the minimum percentile in order to be considered eligible for admission process. The Selection Process is the Common Admission Process which is a 2 step process. Details related to selection process are mentioned above in the article. The fee for IIM Sirmaur is approximately Rs 10 Lakhs.

Question: What is the placement scenario of IIM Sirmaur?

As compared to previous years there is a 40% increase in the number of recruiters. The highest package offered among students is 16 LPA while average package was 9.2 LPA.

IIM Sirmaur honours 35 students with MBA Degrees at its 2nd An...

Your IIM Sirmaur brochure has been successfully mailed to your registered email id .