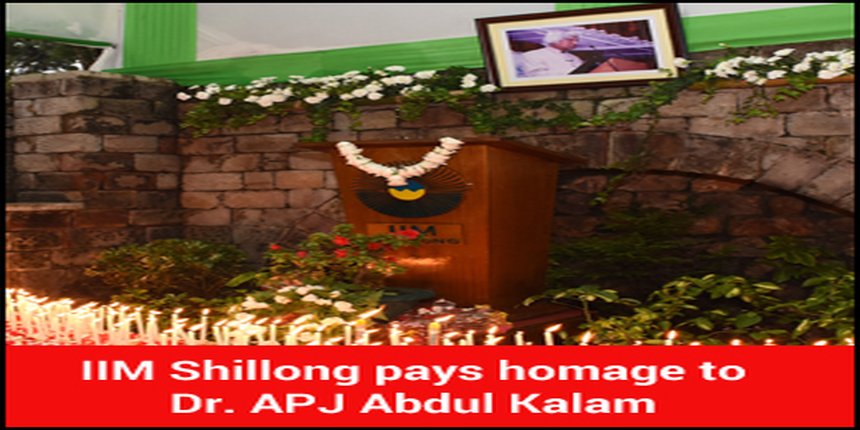 Inaugurating the session, Dr. Amitabha De, Director, IIM Shillong, said, "Dr. Kalam believed in working sincerely and tirelessly for the betterment of the nation". He also mentioned how the reputed institute would be partnering with the Ministry of Development of North Eastern Region (DoNER) and various states to establish the Dr. Abdul Kalam Centre for Policy Research and Analysis. Dr. De also announced the foundation of an auditorium to be named after Dr. Kalam, who had breathed his last at the Institute while delivering a lecture in 2015.

Shri Madhavan Nair also spoke on the theme of the day, 'Space and Society: The Indian Scenario', and described how ISRO had grown to become a successful venture in modern India. He talked about the history of human space endeavour, and about its progression from the days of 12-inch rockets to the technological advancements of the day. He also recalled how Dr. Kalam had adopted a versatile approach towards fulfilling his commitments to society, both as a scientist and later as a President.

Dr. Rohit Dwivedi, Chairperson, PGPEx, highlighted Dr. Kalam’s institutional building capabilities which had put ISRO on the same pedestal as NASA. Dr. Basav Roychaudhury, Chairperson, PGM, IIM Shillong, concluded the session with a vote of thanks to the Chief Guest and other guests who marked their presence in the IIM Shillong Annual Lecture Series.

Stay tuned to bschool.careers360.com for more news on IIM Shillong

First off, UPSC has got nothing towith CAT. Both of them are different and so you cannot compare UPSC and CAT cut off. These are the expected cut offs for IIM Shillong:

SIBM Pune vs IIM Shillong. Which one is better?

IIM Shillong is better because it has emerged with the better return on investment, through the difference in marginal which is compared to SIBM Pune. This institute which significantly charge more higher fees which has larger number of recruiters on campus.

Im currently doing B.com hons along with CA. I want to go into investment banking so after this Ill do an MBA. The problem is Ive 8.0/10 CGPA in 10th and 75% in 12. Can I get into a place like IIM Shillong if I do well in graduation and CAT? Btw, Im general and male.

Hi,
When your score in class 10th and 12th is good. Now when IIMs give a call back for interviews there main focus is on your CAT score with atleast a minimum of 50% score in your graduation. Alongwith the CAT score they also see your resume, whether you have done any internship or any other extra activities that give you an edge over others. So don't fret over school results they are fine as they are.
Read More
Answer

what is the placement report of IIM shillong.?

IIM Shillong had 60 recruiters for the batch 2018-20 that included Bain and Company, Amazon, Goldman Sachs, AB InBev, Mahindra GMC, Godrej and Tata Steel among others. The average salary has been increased by 11.7%. The highest domestic package was 40 Lakhs per annum.

The highest International CTC was Rs. 48.5 lakhs per annum

The average CTC was Rs.18.76 lakhs per annum

Iim amritsar cut off is 80 percentile and iim shillong 75

Hello aspirant
Based in CAT 2019, IIM Shillong and IIM Amritsar has released the cutoff list for admission into academic year 2020-22.
IIM AMRITSAR has 85 percentile as cut off for general category along with sectional cut offs. Furthermore, unlike other IIMs, IIM Shillong does not release the overall cutoff of CAT. The cutoff for Shillong takes into consideration SSC, HSC and graduation score as well. You can visit the following link for detailed cut off:-
https://bschool.careers360.com/articles/iim-shillong-cutoff
https://bschool.careers360.com/articles/iim-amritsar-cutoff
Good luck
Read More
Answer

Your Indian Institute of Management Shillong brochure has been successfully mailed to your registered email id .