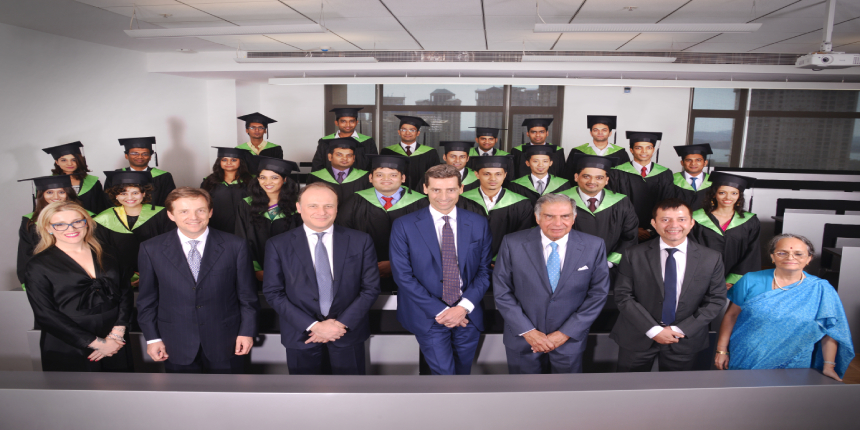 The Class of 2015 was awarded certificates for the Post Graduate Program in Business and Diploma in International Business from SDA Bocconi School of Management. The event was held in presence of  Mr. Lorenzo Angeloni, Ambassador of Italy to India and Nepal, Mr. Ugo Ciarlatani, Consul General of Italy, Indu Shahani, Former Sheriff of Mumbai and Principal of HR College and Deepak Sood, MD, Avantha Ergo Life Insurance.

Speaking on the occasion, Ratan Tata said, “We are at an important time in India’s history. When you step out of the academic world into the real world, the opportunities before you hopefully are going to be quite enormous. Being an entrepreneur or starting your own enterprise, as against joining the traditional company, has become the style of the day. If you have  a good idea, and good funding, then the opportunities for you are considerable if you are willing to take the risk.”

Andrea Sironi spoke about international exposure shaping young global minds and emphasized the importance of behaviour as a citizen. He said, “Independence of mind not only notions ability to critically reason and own independent opinion, but always challenge, which is very important as future citizens and managers.”

*DISCLAIMER: The Article published here is based on the information provided by the concerned college/university and Careers360 is not accountable for the content in the same.

Know all about SDA Bocconi admission process for IMB Programme

Check out all the details for SDA Bocconi IMB Admission proces...

Know all the details about the SDA Bocconi Asia Center Placeme...

All About SDA Bocconi Entrance Test

SDA Bocconi Entrance Test - Get to know all about the SDA Bocc...

Life at SDA Bocconi Campus: A 24/7 Learning Experience, by Ape...

Is getting into SDA BOCCONI ASIA CENTER MUMBAI difficult with 7.8 CGPA in 10th, 70% in 12th and aggregate of 60% in graduation

There are various factors that are taken into consideration for SDA Bocconi's selection process. For starter's Graduation in any discipline will do good. But on an average the Candidate's work experience is between 3-8 years. But as a fresher, if you have an impeccable Academic record, your application will be considered. And you will have to take a Language Proficiency test like TOEFL/IELTS/PTE/CPE,etc. And the applications are shortlisted considering various factors like Academic profile, Language proficiency test score, work experience and your CAT or GMAT score. GMAT is the most preferred exam here. Now though you have a good Academic profile, you need to come up with a solid Recommendation letter and an outstanding performance in the Interview to be selected for their full time MBA programme here. For more information, please visit their official website at: https://www.sdabocconi.it/en/faq/full-time-mba

I have been reading about the course not having a AICTE accredition, wont that affect the value of the course?

I understand that you are interested about some course at SDA Bocconi Asia Center, Mumbai and have noticed that the course is not accredited by AICTE and so to answer your question I would like to advise you that you please do not take this particular course into consideration as most of the organizations do make a note of the fact that whether the candidate has studied from an AICTE approved college or not while placements or during employment as they take this matter into significant consideration.

How to Prepare for TS ICET 2020 Exam's Analytical Ability?

How to prepare for TS ICET 2020 Mathematical Ability?

Your SDA Bocconi Asia Center, Mumbai brochure has been successfully mailed to your registered email id .