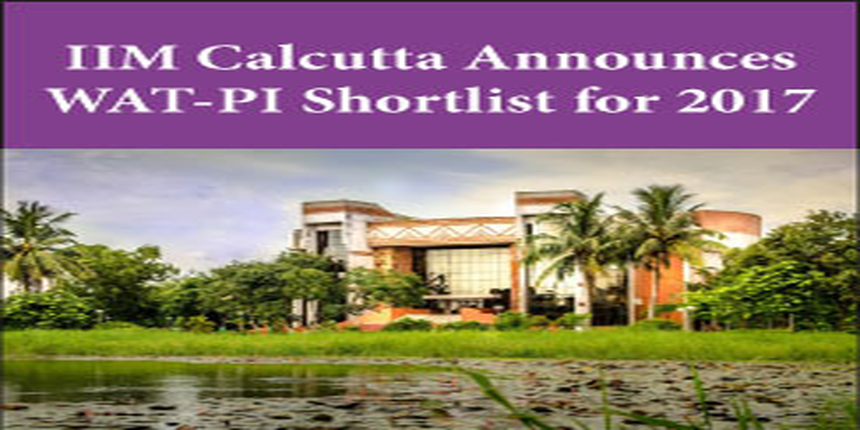 IIM Calcutta has declared the shortlist of candidates to appear for the selection rounds of PGP and PGDM 2017-19 batches. If you have cleared the IIM Calcutta cutoff for CAT 2016, you can check your shortlist status from the official website of IIM Calcutta or here at this page. The CAT 2016 result was declared on January 9, 2017. The shortlisted candidates will have to appear for Written Ability Test (WAT) and Personal Interview (PI) rounds to be conducted in various cities across India. The selection procedures are most likely to be conducted in the months of February-March, 2017.

How to check your Shortlist Status at IIM Calcutta

Click here to check your shortlist status at IIM Calcutta for 2017-19 batches or check in the window below.

The candidates are primarily shortlisted on the basis of the CAT 2016 cutoff of IIM Calcutta. The following table brings to you the category and section wise CAT 2016 Cutoff.

Apart from the CAT percentile, other criteria which are considered for shortlist are past academic records and Gender Diversity factors.

The components and weightages considered for the generation of IIM Calcutta 2017 merit list are given below.

The shortlisted candidates will be intimated about the WAT-PI schedule and venue through email or post.

Stay tuned to bschool.careers360.com for more news and updates on IIM Admission 2017.

IIM Calcutta Admission Criteria 2020-22: IIM Calcutta has released the CAT 2019 cutoff for the in...

IIM Calcutta Cutoff - IIM Calcutta will release CAT cut off for the academic session of 2020-22. ...

IIM Calcutta has concluded the final placement process for the batch of 2019 with 501 offers made...

IIM Calcutta Director in charge talks about the importance of choosing accredited B-Schools and h...

Hi aspirant,
IIMs are known to raise their bars of the expected percentile in the examination. The general bracket of the accepted CAT percentile ranges from 95 to a 99.98 percentile so as to get you a PI, that is, a Personal Interview call from the IIM institutes. In regard to this they also consider 12 and 10 class marks and grade them. With your score you have fair chances of getting a call from IIM ahemdabad but you have to clear analytical written test (AWT) and personal interview for admission. Follow this link for more details-
https://bschool.careers360.com/articles/iim-ahmedabad-cutoff/amp
Hope this helps.
Read More
Answer
Answer Later
Report
5 Views

How do i get admission in iimc new delhi?

IIMC Entrance Exam  is a university-level exam conducted by Indian Institute of Mass Communication for admission to PG Diploma courses in Journalism, PR and Advertising and Radio and TV Journalism offered at the university.

This year the exam is expected to be held in the last week of May 2020 in offline mode. The application forms for the same will be available from the third week of April 2020. The application process will be conducted in both online and offline mode. Candidates with a bachelor’s degree will be eligible to apply for the entrance test.

My friend have lower percentile than me and we have same academics and job experience but still he got call from IIM C and I didnt,why was that???

The above table is followed to allot marks for your 10th and 12th scores. For computing the percentage, the marks of all the subjects in the marks sheet will be considered irrespective of the fact whether they are considered by the Board or not. Now the Bachelor's degree marks are calculated using the following table:

The percentage of marks obtained by the Candidate in the Bachelor's degree would be calculated based on the practise followed by the University/Board. Now the final weightage is calculated as follows:

And finally work experience is calculated using the following tale:

You can check the complete process at their official website at: https://www.iimcal.ac.in/programs/pgp/admission/admission-policy/admission-procedure-for-domestic-candidates

View All Questions
Have a question related to IIM Calcutta ?