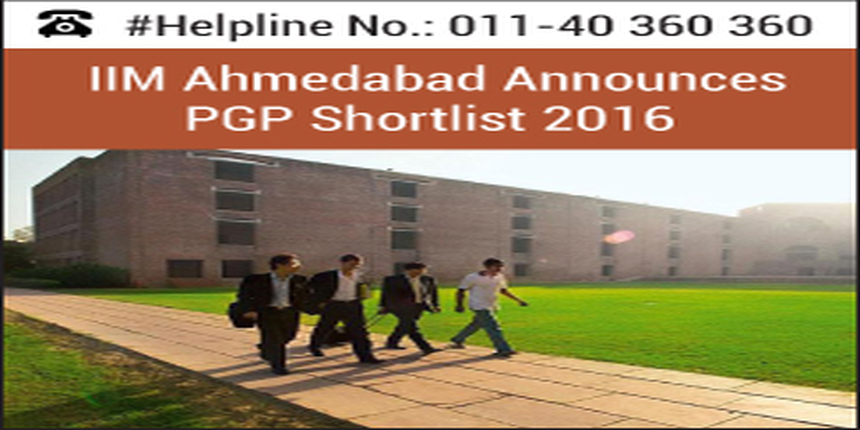 IIM Ahmedabad has declared the shortlist for PGP 2016-18 batch on January 12, 2016. A total of 1,182 candidates have been shortlisted for the next round of the selection process- Academic Writing Test (AWT) and Personal Interview (PI), which is 5% less compared to previous year’s 1,249 candidates. As per the IIM Ahmedabad Admission Criteria 2016-18, the preliminary screening has taken place on the basis of CAT 2015 scores and cutoff, and Application Rating Score, which includes past academic records, work experience or profile.

How to check the shortlist status?

Enter details in the box provided below:

Once a candidate will be able to log-in, he/ she will receive a message- ‘You have (or not) been short-listed for Academic Writing Test and Personal Interview (AWT-PI) for admission to PGP (2016-2018 batch), IIMA’. The first shortlist has been done on the basis of their CAT cutoff.  The following table will share with you the CAT 2015 cutoff for IIM Ahmedabad

Candidates meeting the following minimum cut-offs have been called for the Academic Writing Test (AWT) & Personal Interview (PI). The number of candidates across different categories eligible to be considered for subsequent stages is as follows:

The AWT & PI rounds will be conducted in February-March 2016. The selection at the final stage for the candidates short-listed after AWT PI rounds will strictly be based on the Composite Scores (CS). The composite scores will have ranks on the Aggregate Score (based on CAT/GMAT, Academic Rating (AR from the admission criteria) and (WA-PI Scores) within each category.

Last year, the total number of candidates shortlisted for the Academic Writing Test (AWT) and Personal Interview (PI) rounds was 1249. Compared to last year, this year 5 percent less candidates have been called for AWT PI rounds.

This year for the PGP batch of 2016-18, the total number of candidates for the next level of shortlist via CAT 2015 scores is 1182 out of which 19 overseas candidates have been shortlisted through GMAT scores.

The result of CAT 2015 was declared by IIM-Ahmedabad officials on January 8, 2016. The CAT 2015 Results was communicated via text message to the registered contact numbers of the candidates. This year, 1, 79,602 candidates appeared for the exam out of 2, 18,664 applicants.

Around 62% of the test takers were from the engineering background. A total of 17 students secured 100 percentile in CAT 2015 results, out of which 1 is female.

Pushkaraj in his interview talks about his initial days at IIM Ahmedabad and how he got adjusted ...

IIM Ahmedabad has completed the final placement process for the batch of 2019 in three clusters w...

I have calls from IIM A,B,C and I am sure I will covert at least one of them. I have a full-time offer from Axtria with in-hand cash 10LPA + other benefits over and above in campus placements. I know its too early to ask without clearing IIM interviews, but which one to choose? IIM/Job?

The answer depends upon several factors

The first and foremost thing is that if you are interested in management jobs then you should choose IIM but it is not a simple because on one hand you are losing a job and as well as the fee for IIM is very high and you need to take a loan so you have to think on that line also.

The one cases if you are financially very strong and you can find your studies without taking loan then it is best to go for IIM or else if you can get anthem scholarship then it is also good to choose IIM.

The best part in choosing Iim is that you will be going in management jobs and it will guarantee you a safe future.

I am a chartered accountant and belonging to non creamy obc layer . what percetile should I get to get a call from iim Ahmedabad

For OBC candidates the minimum overall percentile required in CAT is 75 with the sectional cutoffs being 65 in each section. But you should score 80-85 percentile in order to be on the safer side as IIMs do a very rigorous shortlisting based on the profile, candidate's CAT percentile and extra curricular achievements.

Santosh, IIM A has the following percentiles as the minimum cut offs for 2019 across all Categories.

Now the various ratings for various scores are as follows:

Now coming to the 12th, it looks like this for various Streams:

And then the Rating scores for Bachelor's degrees are as follows:

And for professional degrees, the rating scale looks like this:

And then work experience is considered too for those Candidates who have it. The scores from each level of studies are added up. And the no.of Candidates shortlisted per each Category will be as follows:

And after being shortlisted based on these criteria, Candidates have to be shortlisted also for WAT and PI rounds. The whole process can be checked at their page: https://www.iima.ac.in/web/pgp/apply/domestic/admission/selection-process

View All Questions
Have a question related to IIM Ahmedabad ?