XLRI Jamshedpur has released the official Answer key of XAT 2016 for Paper 1 and General Knowledge part of paper 2. The Answer Key is available for download here.The General Knowledge answer key has been announced first time this year. Candidates who appeared in XAT 2016 conducted on January 3, 2016, can now download the answers to the questions by log-in through their credentials. The officials besides answer keys have also released the explanations to the solutions for XAT 2016. 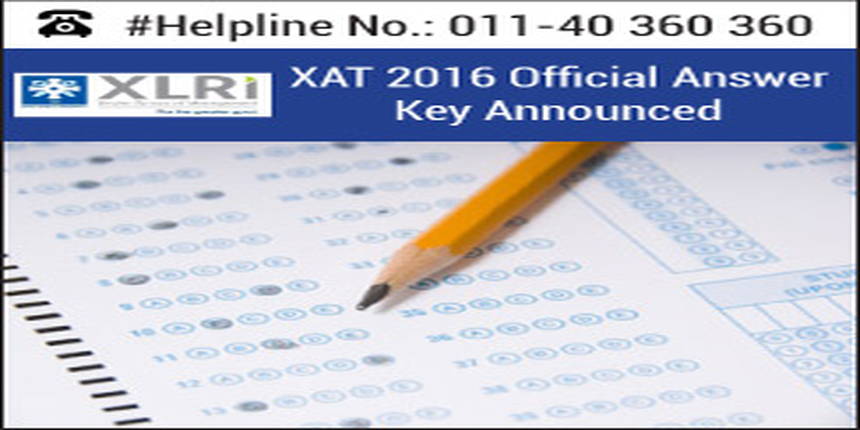 Last year onwards, XLRI Jamshedpur  had started releasing the official answer keys along with the detailed solutions. As per the XAT officials, this initiative has been taken by the XLRI in order to maintain the transparency in the process. The official XAT 2016 Answer Key brings you the keys for all 4 question paper sets -  A, B, C and D, for Paper 1, and Paper 2-General Awareness also. Till last year, the answer key for Paper 2 (GK section) was not provided.

XAT Official Answer Key 2016 helps candidates to calculate the estimated score and help them understand their chance to get shortlisted by XLRI Jamshedpur or other top MBA colleges accepting XAT scores. Hence, it is important for the test takers to download and check the answer keys.

This year XAT was announced with a few major changes in its exam pattern and marking scheme. The Paper 1 comprises of VA, Decision Making, and QA &DI. As per the changed pattern, the number of questions in Paper 1 was 78 to be completed in 170 minutes. The time allotted to Paper 2 was increased to 35 minutes, compared to previous year’s 30 minutes. The number of questions in this section was reduced to 25 from 30.

In terms of the changes in the marking scheme of XAT 2016, there will be a negative marking of 0.05 marks after 13 un-attempted questions.

The result of XAT 2016 is expected to be declared by the end of January 2016, in the form of score-cards where the test takers get section wise and composite scores out of the total marks along with the percentile.