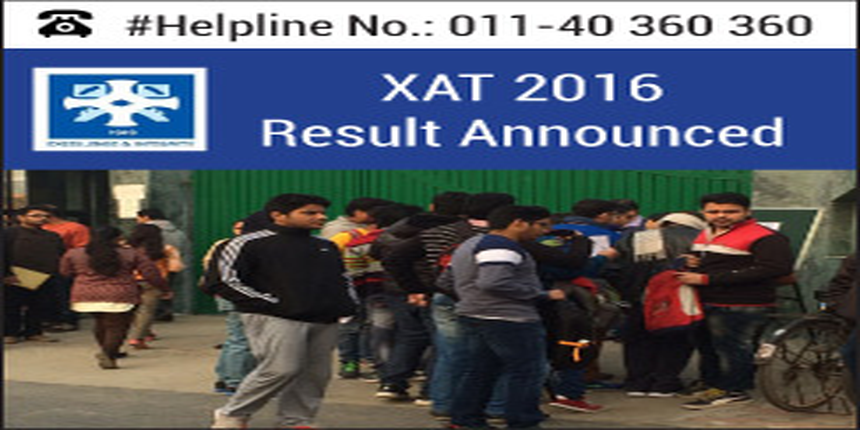 The Xavier’s Aptitude Test (XAT) was conducted on January 3, 2016 in paper-pen based mode across centers.

The following steps need to be followed to check the result:

The original score cards will be sent to the candidates by post to the address provided in the application form. As per the marking scheme of XAT 2016, each question carried 1 mark and for each wrong answer, there was a negative marking of Â¼ of the allotted marks. The candidates were allowed to leave 13 questions un-attempted, beyond which, there was negative marking of 0.05 marks.

XLRI had released the official Answer Keys on January 14. XAT officials admitted to at least one wrong question in the GK section of the test, in the officially released XAT 2016 Answer Key. “Question 77 is withdrawn since the options did not have the right answer,” read a notification on XAT website. Besides this, the official answer key also differed from the answer key already announced by different MBA coaching institutes.

Besides changes in its marking scheme, this year XAT also underwent changes in its exam pattern. The test was divided in 2 parts, Paper 1 and Paper 2. Paper 1 was completely objective consisting of 3 sections, Quantitative Ability, English Language & Logical Reasoning and Decision Making of 3 hours duration. The Paper 2 was a combination of objective and subjective questions from General Knowledge and Essay Writing respectively. Also the number of questions was decreased.

It is expected that XLRI will release the official cutoff  percentiles for the different programmes shortly.  The following table brings to you the last year’s cutoffs.

On the basis of the cutoff, candidates will be shortlisted by XLRI Jamshedpur and other XAT participating institutes  for the next round of selection process; Group Discussion (GD), Personal Interview (PI) and or Essay Writing/Written Ability Test (WAT) rounds.  As many as 141 B-schools will conduct their admissions through XAT 2016 scores

while filling the XAT form for registration do we need to upload the best of 5 marks in 12th or we have to provide with the marks of all the 6 subjects?

While filling the form, I guess there will be a box in that you have to fill out of what score you get this score for example 50 out of 100 so, if you are providing the 6 subject marks so just mention out of 100 you got that if there is no box related to the max. marks (out of ) so you should just provide best 5 marks.

I hope this information will help you

I am class 12 (pcm) student My aim is to get into the top B schools ,And I am from non english(my english is not much good ) background what should I do for exams cat, cmat, xat and more, which branch should I take for backup ?

First of all you have said that your English is not strong enough but let me tell you it's perfectly fine. To get admission in any top B school, you need to qualify the entrance examinations and before that you might opt for BBA degree, you can also pursue any subjects in your bachelor degree.

Xavier Aptitude Test or popularly known as XAT is a national-level management entrance test conducted by XLRI, Jamshedpur, for admission to management programs at XLRI and other XAT participating institutes across the country. ... Around 75,000 candidates are expected to appear for XAT 2021.

You can check the below link for the eligibility criteria for the admission.