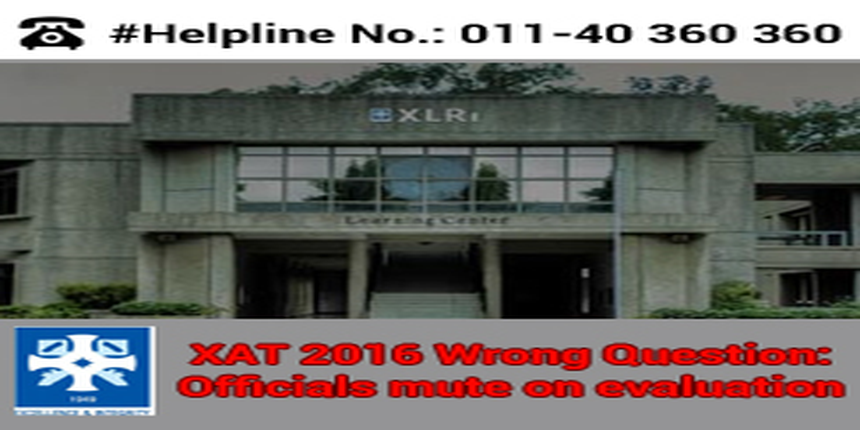 The XAT officials had admitted to the wrong question in the official answer key released on January 19. “Question 77 is withdrawn since the options did not have the right answer,” read a notification on XAT website. Careers360 had also reported that more than 40 answer keys released by officials differed from the answer keys released by different coaching institutes.  Careers360 sought official response after hundreds of distressed calls from XAT takers, who were confused after the release of the officials answer key.

According to the coaching institutes, answers to as many as 40 questions, from Paper 1 and 2, are doubtful. The XAT 2016 answer key was released by officials on January 19, 2016, for all the Sets (A, B, C, D) of Paper 1 and 2, along with the explanations to the answers.

As per the changed and already described marking scheme, each question carried 1 mark and for each wrong answer, there will be a negative marking of Â¼ of the allotted marks, along with a negative marking of 0.05 for un-attempted questions, subject to a maximum of 13 questions.  However, the officials have not yet stated anything regarding the marks of the one question which has been scrapped by the authorities.

The exam was conducted on Sunday, January 3, 2016, in paper-pencil based format with major changes in its test pattern.  The result of XAT 2016 is expected to be declared in the last week of January 2016. The result will be declared in the form of score-cards where the test takers will get section wise and composite scores out of the total marks along with the percentile.

On the basis of the XAT 2016 Result, candidates will be shortlisted by XLRI Jamshedpur and other XAT participating institutes on the basis of the cutoff for the next round of selection process, Group Discussion (GD), Personal Interview (PI) and or Essay Writing/Written Ability Test (WAT) rounds.