XAT 2016, the MBA entrance exam for XLRI Jamshedpur and 140 B-schools across India has been conducted on Sunday, January 3. Xavier Aptitude Test (XAT), which is considered to be one of the toughest MBA entrance exams, has undergone several changes in terms of the exam pattern and marking scheme. The exam was of moderate difficulty level as per the test-takers' first hand experiences. 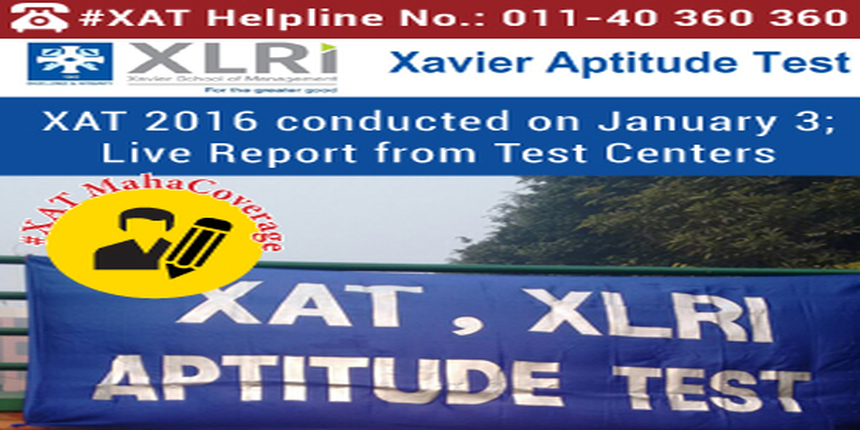 Approximately 90,000 candidates took XAT 2016 across 47 cities in India and 2 international cities. The scores will be accepted by 141 B-schools across India. The exam was scheduled from 10:00 am to 1:30 pm. The reporting time for the candidates was 9 am.

Careers360 had reported live from the test centers to give you a glimpse of the activities in the exam venue.

1:45 pm - XAT 2016 aspirants relate their exam experiences to Careers360 as a majority of test-takers said that the MBA entrance exam was moderate in terms of difficulty level.

Sneha - XAT 2016 with a new face is easier than last year. For me the paper was indeed good and I welcome the new pattern as the sections were of avaerage difficulty with General Knowledge as tougher for me and Quant the easiest of all.

Shreya - I experienced the exam to be of moderate difficulty level. The negative marking scheme didn't put any effect over me. English was tricky and Quant was good.

Sandeep - XAT 2016 was easier than last year but tougher than CAT 2015. The new policy of negative marking didn't put any such adverse effect as I was afraid of.

Pranjali - For me English was a tricky one and Quant was easy. The General Knowledge was more oriented towards Economics. Overall paper was moderate.

1:25 pm - Guardians wait outside the exam centres as the MBA entrance exam is about to conclude.

10:05 am - Though the entry for XAT 2016 have been closed, some of the aspirants at some test centres are allowed to enter despite being late.

9:15 am - Gates are about to open as the aspirants queue in to get entries.

9:00 am – The XAT aspirants are still waiting as the entry to the test center starts. On the other hand, some late comers are seen rushing towards the center.

8:45 am – Candidates check the seating arrangement according to their Center Registration Number (CRN). While some others choose to go through the last minute revision by glancing over notes, others decide to ease the stress by talking to fellow test takers or parents accompanying them to the center.

8:30 am – Early birds are seen to be entering the test center premises despite the freezing cold January morning.

8:00 am – The test center authorities prepare for the big day by ensuring the display of instructions and seating arrangements outside the test center.

Stay tuned to bschool.careers360.com for more news and updates on XAT 2016