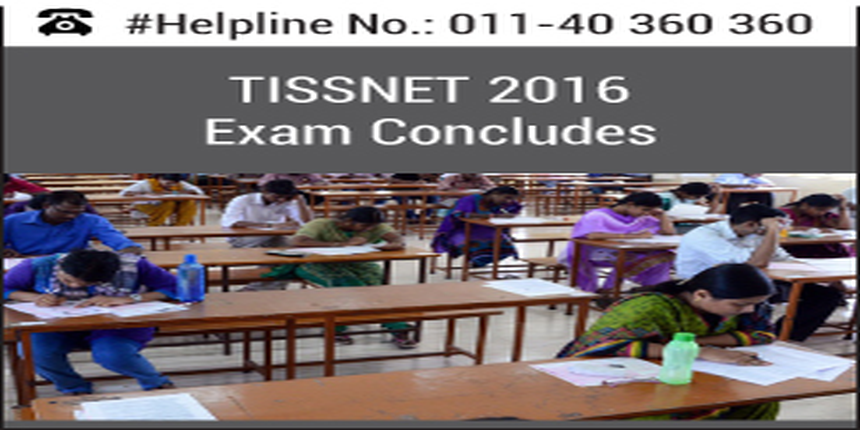 The Tata Institute of Social Sciences conducted its national level entrance test- TISSNET  on January 9, 2016, in a computer based mode. The computer based test had 100 objective questions to be answered within the duration of 1 hour 40 minutes. The test started at 2 pm and concluded at 3.40 pm across 39 centers.

The exam is conducted for admissions to Masters in Social Work and related programs offered by Tata Institute of Social Sciences (TISS). TISSNET scores are accepted only by TISS Mumbai only.

As per the official exam pattern, the test had four sections namely, General Knowledge, English Proficiency, Analytical Ability, Logical Reasoning. Only the candidates who had their admit cards were allowed to appear in the test which was conducted as per its schedule without any glitch.

The final selection will be based on the basis of three different components, entrance test scores, pre-interview scores and personal interview test scores.

The registration for the test started from October and continued till December 8, 2015, in both online and offline mode. The computer based test was conducted on January 9, 2016, and the results for shortlisted candidates will be announced on February 2, 2016.

You will have to enter your registered email id and password that you created for TISSNET. If you are still not able to login, mail their helpdesk at: pgadmission@tiss.edu (mailto:pgadmission@tiss.edu) . You can also contact them at 022-25525252, 91-22-2552 5000. Mail them from your registered email. Before that once try shutting down your computer and restart and try it again.

i cleared the cutoff of tiss net 2020 and got the PI call fromMA IN hospitality and analytics management. are these cou rses are good in tiss. and when did the PI call letter come.

Hello,
First of all congratulations on your selection. TISS is a brand in itself, so all the courses their are almost good. Hospital and analytical management is one of the most popular course and its placements are good too. Most importantly TISS is good in terms of ROI. You got a call alreay so don't worry you will get your PI call letter soon too. Keep checking your mail.

what will be the cut off for M.A in Data Science program for tissnet exam ?

TISS NET 2020 exam has been conducted and questions in the exam were asked from the following sections:

Am i eligible for the TISS because i got 45/50/35 in 10th/12th/ Grad respectively, And anyone can suggest me for which specialation should i go ???

Sonu, admission to Master's courses in Tata Institute of Social Sciences occurs through TISSNET. Now, you can apply for TISSNET if you fulfill the conditions required as stipulated by the institution. These conditions are known as eligibility criteria. Now, the eligibility criteria for applying for TISSNET in terms of educational qualification in most cases ie for admission to most courses is that the candidate should be graduate in any stream or discipline or he/she must be appearing in their final graduation paper and have to submit their passing certificate by any date stipulated. As far as you are graduate, you can apply for most cases, however, for some courses like MA (Organisation Development, Change and Leadership), Master of Public Health (Social Epidemiology), M.A. Social Work in (Disability Studies and Action) etc , the requirement is that graduation should be from a certain stream or subject or there should be some job or internship experience for the candidates. For mire information about these eligibility criteria, you can use the link

As regards to query about choice of specialization, the choice should be such that should generate interest and entertain you. It totally depends on your interest areas, however, there are some courses or specialization which are quite popular among the student groups and some of them are M.A. in (Human Resources Management and Labour Relations) ,  MBA, Master's of Arts etc. So, the specialization should be such that the student feels comfortable in it and is usually chosen by applicantd in the stream as graduation.